The Future Of Windows Mobile: Windows 10 And Continuum 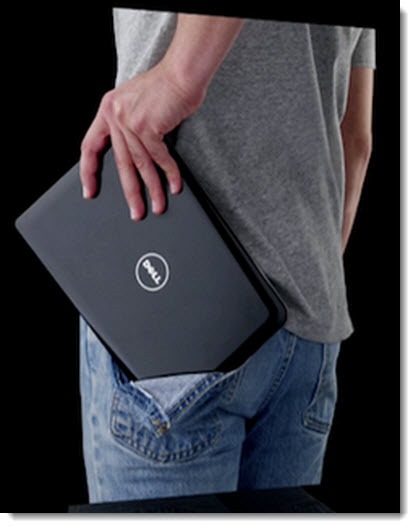 In 1980, Bill Gates declared that Microsoft’s goal was to put a computer on every desk and in every home.

In 2015 Microsoft will announce that it can put a computer in every pocket. Later this year, Microsoft is going to introduce smartphones that turn into computers, using technology named Continuum that’s built into Windows 10.

Let me describe what I expect in the next flagship phones from Microsoft, then tell you the background that makes it work.

Microsoft’s flagship phones will almost certainly have five to six inch high resolution screens in thin and light and elegant cases with high quality cameras, just like the iPhone and the best Android phones.

You’ll be able to take this next generation Microsoft phone and plug it into a special dock with a USB C cable. Like laptop docks, the phone dock will have display ports for monitors, USB ports for keyboard, mouse and peripherals, and an Ethernet port.

In other words, that 6” phone will work just like a laptop. When you disconnect the cable, it will go back to working like a smartphone.

It’s more than just a change in screen size. Windows 10 adjusts automatically to match the equipment connected to it. When a full-size monitor is connected to a phone, you can continue to run apps on the phone, as if it is a second display, or you can use the phone as a touchpad to control the mouse cursor on the large screen. Developers will be designing their apps for multiple screen sizes as part of Microsoft’s updated Universal App platform, so the apps on the big screen will change their layout to include more controls or an optimized onscreen layout. Excel on a phone has a simple layout with simple controls. When it’s displayed on a monitor, the same copy of Excel on the same phone will look just like Excel looks on any other computer.

Here’s a possibility: imagine an ultra-lightweight, ultra-low cost laptop shell with no processor inside, just a screen, keyboard and trackpad, and a USB C port to connect to the phone – no docking station needed. Voila! A laptop at a fraction of the cost.

Continuum also powers a new feature in hybrid devices like the Surface Pro 3 that switches between laptop and tablet modes. When I remove the keyboard from my Surface Pro 3, Windows 10 switches to tablet mode – the Start menu goes full screen, programs run full screen, the onscreen keyboard pops up when needed, and programs are optimized for touch. When the keyboard is re-attached, it returns to laptop mode automatically.

Mary Jo Foley sat down for an exclusive interview with Microsoft CEO Satya Nadella last week. He made it clear that Microsoft is still focused on mobile devices but hopes to go beyond simple me-too smartphones. Satya Nadella said:

“We have to be on the hunt for what’s the next bend in the curve. . . . We’re doing that with features like Continuum. Even the phone, I just don’t want to build another phone, a copycat phone operating system, even. So when I think about our Windows Phone, I want it to stand for something like Continuum. When I say, wow, that’s an interesting approach where you can have a phone and that same phone, because of our universal platform with Continuum, can, in fact, be a desktop. That is not something any other phone operating system or device can do.

“For sure there is a form factor today which is below six or seven inches, which is powered by a very specific operating system instance of Windows 10, which is Windows Mobile. But what do you call that (device) when you use Continuum and then you’re using applications on a big screen with a mouse and keyboard? It’s Windows 10.”

The Verge says two Lumia phones are being developed, the Cityman with a 5.2” screen and the Talkman with a 5.7” screen. Both reportedly have powerful processors, generous amounts of memory and storage space, and high quality cameras, and both are specifically built to support Continuum.

We don’t know the timetable for announcing any of these devices. It’s widely believed to be somewhere between the Windows 10 launch on July 29 and “this fall.”

No one can predict whether a new device will take off in the public’s imagination, and at this point it’s hard to imagine that people will stampede to buy Windows phones. (I’m pretty sure that Microsoft could give away a free pony and a bucket of gold coins with every Windows phone and people still wouldn’t buy them.) Still, Microsoft’s venture is at least interesting and at best could clarify a new direction for the entire industry. Apple and Google have nothing to match Continuum yet.

There are some caveats. Apps have to rewritten for the new Windows Universal App platform to take full advantage of larger screens; otherwise what will appear is the standard phone app interface, just bigger. The jury is out on whether developers will step up quickly. Last week Microsoft set the stage by releasing the Office mobile programs fully rewritten for Windows 10, ready to display appropriately on any size screen, six to sixty inches.

To date, smartphones have not run on Intel processors, which means they cannot run traditional desktop Windows programs. These new Lumia phones will not be able to run Chrome or Quicken or Photoshop. Three years ago consumers firmly rejected Windows RT, a version of Windows that could not run traditional Windows programs. If history repeats itself, then consumers will lose interest in phone/computer hybrids when they learn that many programs won’t run on them. On the other hand, people have evolved to a new relationship with their phone in the last few years and perhaps they’ll feel this is a step forward for their phone instead of a step backward from a real laptop. 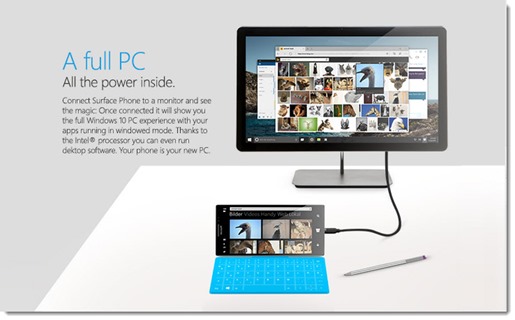 Perhaps Microsoft will have another surprise. A fan made up a fake marketing deck for a “Surface Phone”, speculating that it could be built with the latest Intel mobile processor and include a kickstand, keyboard, and pen. The Intel processor means it could run traditional Windows programs, making it truly a pocket-sized computer. I would only add that Microsoft’s poor experiences with the carriers makes me wonder if it might not be a phone at all – perhaps a new incarnation of the fabled Surface Mini instead, with Skype taking the place of phone service. Microsoft might not be able to convince you to give up your iPhone or Android phone, but to add an inexpensive six or seven inch tablet to your briefcase that can be a full-fledged laptop at your destination? That’s intriguing.

Keep an eye on Microsoft announcements in the next few weeks!