Easy To Do Lists With Wunderlist

Wunderlist makes it easy to manage to do lists. You can use it on iPhones, Android phones, tablets, Windows and Mac computers, and on the web. Your lists will be kept in sync no matter where you look at them. The design is simple and elegant. Oh, and it’s free.

Sounds good, eh? Here’s a little more info for you to decide whether to give it a try.

There’s no shortage of ways to handle task lists.

•  I use Outlook Tasks for my client work, following the plan laid out by Michael Linenberger in his book Total Workday Control. It requires some time to customize the Outlook task view pane but it suits my work flow. (Here’s more info about Linenberger’s method of tracking tasks in Outlook.)

•  Microsoft OneNote can store any kind of information, from web pages to unstructured notes to recipes. It can be used for simple task lists but it’s cumbersome. I use OneNote more than almost any other program but I’ve always abandoned attempts to use it for simple to dos.

•  iPhones have Apple’s Reminders app, which works fine on iPhones and nowhere else.

•  Google introduced Google Keep for Android to little fanfare in 2013 and just got around to releasing a preview of an iOS app. There are no installable programs for Windows or Mac. I don’t happen to like the design but I’m sure it works fine if you have an Android phone and use Chrome.

I wanted an app that would keep my grocery list and a reminder to order more polo mallets, and keep it in sync on my phone and computers. Wunderlist quickly turned up as the top candidate. 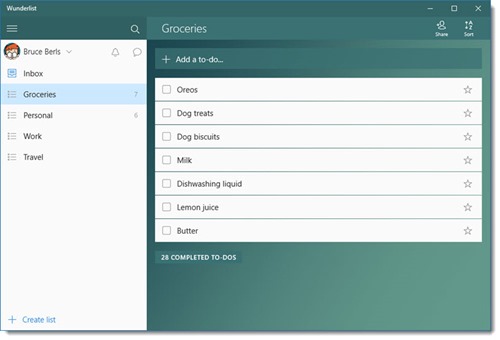 Wunderlist could not be more simple. Add a to-do by typing a few words and clicking a button. Clear it from the list with a simple tap. It’s perfect for grocery lists, as long as you don’t mind wandering the store with your phone in your hand. (That feels a little weird, to be honest, but it’s worth it because it’s so easy to add to the list from anywhere.) Errands, ideas, reading lists, vacation plans – Wunderlist will keep track of them all just as easily.

You can group your tasks (“Groceries,” “Personal,” etc.) You can create recurring tasks, mark some tasks with a star so they rise to the top when you’re looking for them, and a few other tricks. But it’s nothing like the typical task management apps that quickly become more complicated with tags, priority, locations, subtasks, templates and more. Any one of those features might be important to you; the simplicity of Wunderlist is what I was looking for.

There are versions of Wunderlist for iOS and Android, as well as several versions for Windows and Mac computers, plus Chromebooks and Amazon tablets. Microsoft declared that the Windows 10 version is no longer a beta a few days ago. (It crashes regularly. I’m trusting that it will get better.) Download the phone apps from the iOS and Google Play stores, or go here for all the download links.

Syncing your lists among all your devices is automatic and fast. I haven’t tested it but the app supports sharing lists, so household members can share the grocery list easily and it can even grow into a collaboration tool for business.

Most of you will use the basic, free version of Wunderlist. There are also Pro and Business versions with monthly subscription fees that lift limits on sharing and subtasks and add a few other features for bigger teams.

Wunderlist was purchased by Microsoft in June but has continued so far with few changes. It can be linked to your Microsoft account but I can’t figure out what that means – I still have to log in with a separate password. It goes along with Microsoft’s other cross-platform app acquisitions. Last year Microsoft purchased Accompli, a mobile email app, and has been steadily improving it since the acquisition under its unique new name on iOS and Android, “Outlook.” (You know, since they haven’t been using the Outlook name for enough things lately.) Microsoft also purchased Sunrise earlier this year, a nice calendar app for iOS and Android, and so far has left it alone.

Wunderlist is free, simple, and truly cross-platform. Put a note on your to do list to give it a try!