myEcho is an iPhone app that can take your dictation and insert it into any Windows program. It’s remarkably accurate, it’s easy to use, and, oh yes, it only costs $1.99.

If you’ve spent any time trying to set up dictation in Windows, you might appreciate the awesomeness of that achievement. myEcho is modest and limited and might not replace Dragon Naturally Speaking as your primary dictation program, but it’s a lot easier to get started with and it makes a great demonstration of the power of cloud computing. (It’s iPhone only; no Android version.)

myEcho is a side project by Scott Hanselman, a Microsoft engineer who’s one of those talented and smart people who make the rest of us feel a bit inadequate – he’s Principal Program Manager for Microsoft Azure, Microsoft’s huge cloud server project, as well as a programmer, lecturer, podcaster, author, and a few other things too.

The cloud is powering a revolution in dictation. Apple, Microsoft, Google, and Amazon are all doing variations on the same trick: when you talk to Siri (iPhone), Cortana (Windows), an Android device, or an Amazon Echo, your words are sent up to the cloud and analyzed by huge computers that are getting smarter about spoken words every day. The results are sent back to your device so quickly that it seems instantaneous. That’s completely different than the way Dragon works on a computer; Dragon is isolated, analyzing your speech and checking a database on your computer with no access to huge online servers, which means Dragon works with a much more limited source of information and does a much slower analysis.

The result is that dictation today on a mobile device is startlingly accurate. It’s becoming commonplace to dictate email and text messages and to do web searches on a phone by asking a question out loud. We may start to do the same thing with Cortana on our computers running Windows 10 if there’s a microphone nearby (as there is on every laptop).

When you use the myEcho app, you’re actually dictating to Siri. It’s Siri that does the online processing of your words and returns them to your phone. Scott Hanselman realized that he could take that transcribed text and redirect it back online, so the text is received by your phone and immediately sent back online to Microsoft Azure servers. Meanwhile, your Windows computer is running a program that tells those Azure servers where to find your computer. In a split second, the text is relayed through Azure and to your computer, where it is pasted into whatever program has the focus at that moment. It’s a clever design that means the app is completely independent of any particular program – dictation can be pasted into Word, Outlook, Gmail, or any other program.

The app is designed so that your text is never read or held by the Microsoft servers relaying it to you. Everything is encrypted and the app developer promises that your privacy is never at risk. It supports every language that Siri recognizes, which is a lot of languages: text can be dictated in English, Spanish, French, Japanese, Chinese, and more. Scott recorded this video to demonstrate how seamless it is to switch between languages using myEcho. 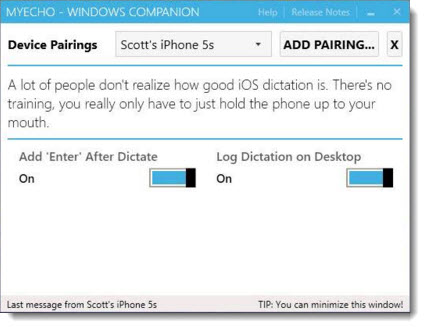 It’s easy to get started. Download the iPhone app from the Store. Download the Windows app and install it on your computer. Visit this page for the download links and installation instructions.

Once the app is running on your computer, you can minimize it and start another program. Open up Word or start a new message in Outlook or Gmail.

Then grab your iPhone and click the microphone and start talking. Click Done after you’ve said a sentence or two. You’ll see the words appear on the computer immediately.

That’s it. You can speak punctuation marks if you want (“I’d agree with you comma but then we’d both be wrong period”), or insert them with the keyboard. The buffer only holds a hundred words or so – hit the Done button every so often instead of dictating long paragraphs.

myEcho does not load up your computer. When the app is closed it is completely shut down, with no processes left running to slow things down.

It’s very satisfying to try myEcho and who knows, it may become one of the programs you use regularly. At the least, it’s a satisfying glimpse of one of the unexpected ways that the cloud will provide us with new tools.

Oh, worth mentioning – as you’d expect, I wrote most of this article using myEcho.

Take a look if you have an iPhone. And have a wonderful Thanksgiving!