Windows 10 Tip: How To Clean Up The Navigation Pane In File Explorer

When you open File Explorer in Windows 10, you see many things designed to make life simpler. There are so many, in fact, that the navigation pane on the left has become cluttered and confusing, exactly the opposite of what you need. Here are some tips about how to remove the “features” that don’t matter to you, to make File Explorer simpler and make you more productive.

What is File Explorer?

File Explorer is the window that opens whenever you’re browsing anything on your computer. When you click on Start and choose Computer or Documents or Network, it’s File Explorer that opens up. When you click on File / Open in programs to browse through your files, you see a specialized view of File Explorer. It’s the icon on the toolbar that looks like – well, what is it exactly? Ah, it’s one of those retro icons. It’s a manila folder in the kind of holder that used to be sold at Office Depot in the 1980s. Look in the Windows 10 taskbar for the icon shown above.

What is the Navigation Pane?

The navigation pane is the left column in File Explorer.

At the dawn of time, in Windows 95, File Explorer’s navigation pane had Desktop at the top. No one knew why. Somewhere there is a retired Microsoft engineer who can explain why he thought that was a good metaphor. Immediately underneath it was “My Computer,” followed by all the drives. 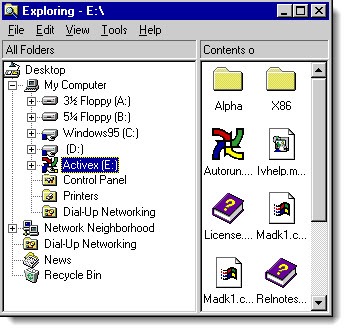 Slowly but surely, the navigation pane began to fill up. Windows Vista added Favorites. Windows 7 added Libraries and Homegroup. File syncing services like Dropbox and OneDrive began to add their own entries. Microsoft began to emphasize the core user folders – Documents, Pictures, etc. – and steer us away from browsing through the other folders on the hard drive. Each new item pushed access to the hard drives further down the list.

This is not a bad thing. It matches our experience on phones and tablets, where we typically don’t have access directly to the file system. Most people have no reason to browse files on the hard drives, and the convenience of having easy access to your user folders is exactly right. Some features, though, are rarely used and are getting in the way.

This is the way that my navigation pane looked in Windows 10 before I started to prune things away. Notice that “Quick Access” is collapsed or it would be an even longer list. I had to scroll down to get to the C: drive.

At least a few of those items can be pruned away.

Each of the following tips is optional. Don’t turn off features that you use! These are suggestions, not marching orders.

The Devices and Printers folder in Control Panel may include “multimedia devices.” Windows 10 automatically looks around the network for devices that are broadcasting their willingness to share media files. In my experience that is a rarely used feature and I have never found a reason for a media device to be displayed in the navigation pane. In the above picture, for example, the Plex servers are listed in the navigation pane for no reason – they’re accessed using Plex software.

Open Control Panel / Devices and Printers. Right-click on each multimedia device and click on “Remove device.” You won’t miss them. 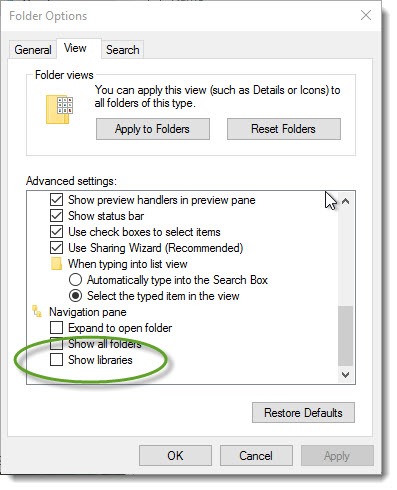 Libraries were introduced in Windows 7 as an innovative way to display multiple groups of files in a single view regardless of where they were stored. For the first time it was possible to gather, for example, personal files and office files in a single window and do searches through them together. Great idea! Unfortunately, like a lot of Microsoft’s great ideas, almost no one understood Libraries or used them to full advantage. Now they feel like an anachronism. Having Libraries in the navigation pane is a distraction for most people.

You can turn Libraries off so they’re not displayed. Open File Explorer and click on View / Options. Click the View tab, scroll down to the bottom, and clear the checkmark by “Show libraries.”

Homegroup was another good idea in Windows 7. Theoretically it’s an easy way to bypass some of the difficulty of setting up a network with shared folders and printers. It never caught on. Like Libraries, it was poorly understood and rarely used.

If you’re not using Homegroup, you can make it disappear from the Windows navigation pane. The process is the same in Windows 7, 8, and 10. There are several steps – follow the instructions in this article. 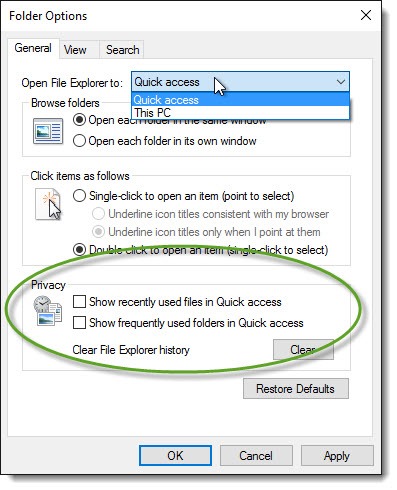 Now we get to very personal preferences.

Quick Access in the upper left of the navigation pane is used to store shortcuts to frequently used folders. Microsoft pre-populates it with a few default choices – Desktop, Documents, Downloads, etc.

That’s similar to “Favorites” in Windows 7 and 8. New in Windows 10, though, is that by default Microsoft adds frequently used folders to the Quick Access list, a list that is assembled and updated automatically by watching you navigate around your computer. For many people that will be genuinely helpful and you should leave it turned on.

Microsoft also added a new optional section to Quick Access that displays recently used files. Again, that might be a welcome way to navigate quickly to files that you have been working on, so you don’t have to hunt for them in your Document and Pictures folders.

Open File Explorer and click on View / Options. The checkboxes to turn those features on and off are on the bottom of the General tab. I prefer to turn them off and use only the shortcuts I’ve placed in Quick Access, which returns it to working like Favorites in Windows 7 and 8. You should experiment to see what works for you.

Tip: Choose whether to open File Explorer to This PC or Quick Access 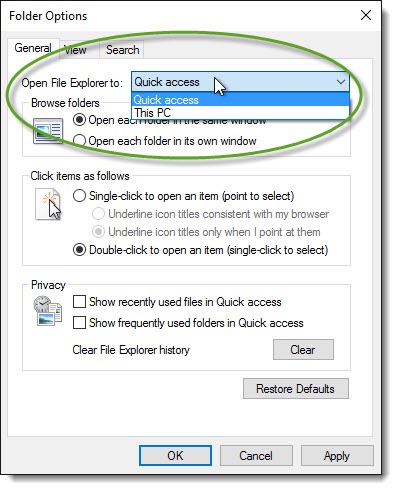 When you click on File Explorer, you can choose whether it opens to Quick Access (the shortcuts and recently used folders and files) or to This PC (your user folders and the drives). There is no right or wrong answer, so experiment to see which one is better for you. The choice is shown in the above picture; again, open File Explorer and click on View / Options to toggle back and forth. 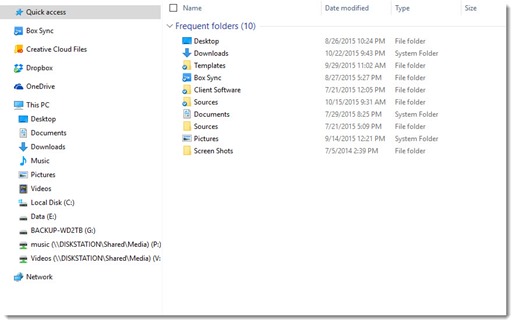 After making those changes, my copy of File Explorer looks like the above picture when I open it. Many distractions are gone and it’s easier to find what I want in the left column. Take control of Windows 10 and make it work better for you!