Windows 10 Tip: How To Stop Windows 10 From Changing The Default Printer

Windows 10 changes your default printer to be the last one that you used. If you occasionally use a different printer or use Acrobat’s “print to PDF” feature, you have to change the printer back to your regular default the next time you print.

This is new. It was quietly introduced as a new feature in the November update for Windows 10, and it is turned on by default even though it’s different behavior than any previous Windows version.

There is sometimes a thin line between a bug and a feature. This is a good example. If this has made your life a bit easier, it’s a feature.

I didn’t realize this was the problem. I just knew that since November I’ve been uneasy, irritable, occasionally snapping at baristas for no reason. Once I found out about this “feature,” I realized it was because I’ve been manually switching printers far too often. For me, it was a bug. Sure, at the same time I had doubled up on caffeinated beverages, but I like to think it was the default printer issue that pushed me over the edge.

You can turn it off.

•  Scroll down and turn off the option: “Let Windows manage my default printer.” 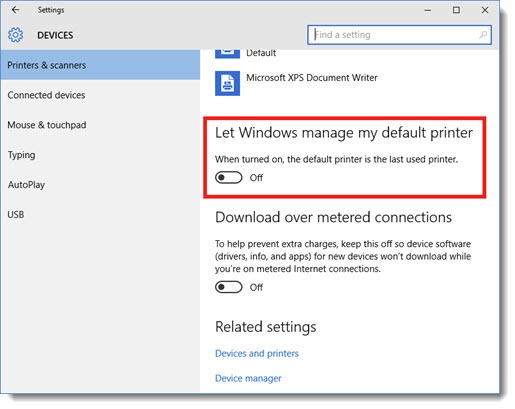 Take a look around at the Printers and Scanners windows while you’re there. It’s a perfect example of a core Windows 10 problem: only a tiny handful of settings have been migrated from Control Panel to the new Settings screens, resulting in duplication and confusion. You can add a new printer from the new Settings screen and you can look at a pretty list of printers, but you can’t actually do anything useful to them. The legacy Devices and Printers controls are still in Control Panel. That’s where you’re required to go if you want to do most printer housekeeping – find out what’s printing, cancel print jobs, look at printer ports, or change printer configurations, for example. It’s inelegant and unintuitive. I love Windows 10 but the Control Panel / Settings mess is one of a number of Windows 10 annoyances that don’t seem to be improving as Windows 10 matures.