No One Wants A Chromebook For Business, Right? 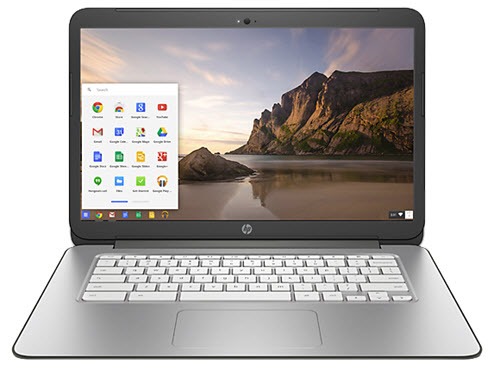 One is an aberration. Two is a coincidence. Three is a trend.

There are three new Chromebooks on the market with some interesting things in common. It’s a trend. It might be an early sign of an important shift in the devices we use.

Let’s get some background, then take a look at the three new devices.

A Chromebook is a laptop that runs Google’s Chrome OS as its operating system – not Microsoft Windows, not Apple OS X.

Start with Google Chrome, the web browser. You probably have it installed on your computer. You use it for browsing websites. It turns out to do some clever tricks when you browse to Google’s online services. It has a file manager to browse files stored online in Google Drive. You can open files in Google’s online word processor and spreadsheet apps. It has a media player. There are Chrome Apps, programs developed specifically to run in the Chrome web browser but still look like native Windows programs. In fact, if you live entirely in Google’s world, you could run Chrome on a Windows PC and never run any other programs and still get all your work done.

Chrome OS is the logical extension of that idea. At its heart it’s really not much more than the Chrome web browser, but it fully embraces all the extra tricks that Chrome can do. It looks kind of like Windows. There’s a Start menu for access to the Google services and Chrome Apps, shown in the above picture. There’s support for USB ports and peripherals. When you turn on a Chromebook, it’s Chrome OS that starts running, not Windows. Although a Chromebook really only comes alive when it’s online, some of the apps are designed to work offline, so you can still do some work on an airplane.

There are two advantages of a Chromebook.

•   Everything is online. When you log into your Google account on a Chromebook – even a Chromebook you’ve never used before – your world is immediately available. Your mail doesn’t require Outlook to be installed and set up – it’s just there in Gmail. Your documents don’t have to be transferred from another computer – they’re just there in Google Drive. Google maintains a list of apps you’ve installed on other devices, so if a Chromebook doesn’t already have an app you’ve used before, it’s clearly called out and requires only a click to install it.

•   Chromebooks are cheap. Really cheap. Chrome OS is streamlined and lean and a Chromebook only needs a fraction of the power that Windows requires, so Chromebooks run fast on cheaper processors with less memory. Batteries last longer. Manufacturers have been targeting the very low end of the market by making Chromebooks with cheap components and plastic cases, so this is a typical list of Chromebooks from Amazon. 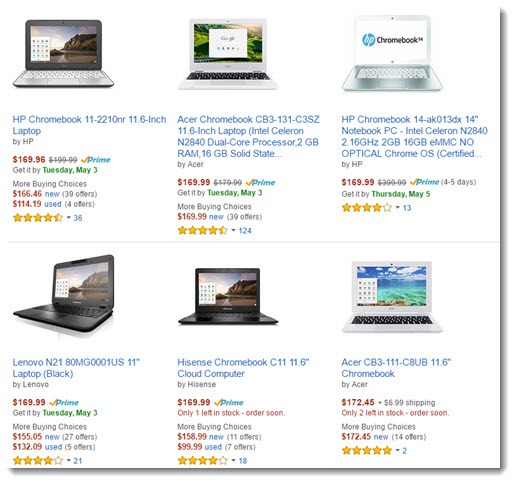 There is one disadvantage of Chromebooks:

•   They only run apps designed for Chrome. They don’t run Windows programs.

No Microsoft Office – no Word, no Excel, no Outlook. No Adobe Acrobat. No Photoshop. No Quicken or Quickbooks. No access to devices or printers unless they support Chrome OS, which is still rare.

For most of you, that’s a fatal problem. You can’t consider a laptop that doesn’t run Windows. It doesn’t matter how cheap it is. If you’re going to get work done, you need a Windows computer – full stop, end of story.

No wonder you haven’t heard of them, right?

If it can’t run Windows or Mac programs, who would buy a Chromebook?

Who would buy a Chromebook? Two groups of people.

One is obvious. If you’re fully committed to the Google ecosystem, a Chromebook might be the obvious choice. That’s a relatively small number of people so far, although it’s growing fast, especially in the tech world.

The other, though, is only obvious when you think about it. Go back through the characteristics of a Chromebook: it’s cheap; when you log into it, you are immediately plugged into your Google-centric world of mail, documents, pictures, notes, websites, games, collaboration; and if it has to be replaced, nothing is lost because you are immediately re-connected to your Google world on the replacement.

So the other group buying Chromebooks: Schools. D’oh! Of course. Windows PCs are difficult to manage and moving a student from one to another is an exercise. iPads and MacBooks are expensive. Kids break things. A school would much rather have a student break a $170 Chromebook than an $800 iPad.

That’s why Chromebooks now account for more than half of all devices sold for US classrooms. That’s happened in four years, basically overnight, and the Chromebook share of devices in the classroom is growing fast. It’s a remarkable change in education that is happening right under our noses. A generation of kids will grow up in Google’s world. Our knowledge of Windows will mark us as old-timers to the kids, kind of like knowing how to dial a phone or adjust a TV antenna. Young whippersnappers. They wouldn’t know how to edit a registry to save their life. In my day, we knew what a command line was, you betcha.

Here are ads for three brand new Chromebooks from HP, Dell, and Acer. See if you can tell what the marketing pitches have in common. 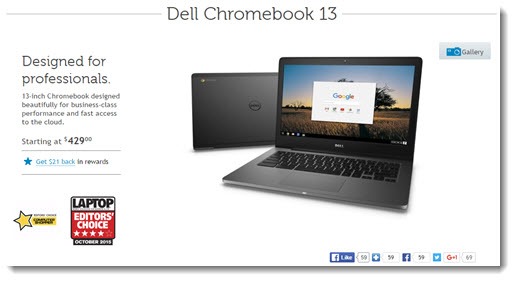 All three of those new Chromebook models feature improved construction, metal cases, and design that comes close to the most stylish Windows business laptops. The specs are upgraded from the ultra-cheap Chromebooks to include more memory and better Intel Core processors. There are USB-C ports, support for docking stations and multi-monitors, backlit keyboards, high-quality trackpads, and high resolution displays.

The price goes up from the ultra-cheap models, of course, but these new business-class Chromebooks are still roughly half the cost of a comparable Windows laptop. Each of these models starts below $500 and might cost a bit more than that with the right configuration.

The price makes them immediately attractive, but it doesn’t answer the question of why the manufacturers think they can sell these to businesses.

Let’s start with the answer for my small business friends and clients.

Enterprises, though – large businesses might be starting a long-term shift that will open them up to Chromebooks, drawn by the cheap price and easy management.

•  Large businesses will be able to set up the infrastructure that will let Chromebooks run conventional Windows programs that appear identical to the same programs on a Windows laptop.

Along with the HP Chromebook, Google announced improvements in Citrix Receiver for Chrome, “a virtualization solution that lets you remotely use apps from other platforms in their own window.” Citrix explains that Windows programs work exactly like native Chrome apps, opening in their own windows and behaving like the apps for multitasking and switching among programs.

This is the real secret to running Chromebooks in business. With the right infrastructure, the experience on a Chromebook is like magic: Windows programs run completely normally and at full-speed, without Windows, on a cheap device with low-end specs.

Those Windows programs are not installed on the Chromebook. They’re just shortcuts on the desktop. That’s because they’re not really running on the Chromebook at all. They’re running on a big server in the company data center and the Chromebook is displaying a special view of each program, more or less like using Remote Desktop or LogMeIn to connect remotely to your office PC.

It’s limited to enterprises because that big server in the company data center costs fourteen million dollars and requires an IT staff of hundreds to maintain it. Something like that. I have no idea what it costs or how it’s maintained, to be honest, but trust me – this is for big companies only.

My expectation, then, is that individuals will buy more Chromebooks and fewer Windows laptops in the next few years, especially after Google announces that Chromebooks will be able to run every Android app in the Play Store.

Big businesses will buy more Chromebooks and fewer Windows laptops in the next few years to save money, after they build the infrastructure for the Chromebooks to run Windows programs.

And small businesses will be stuck. They can’t do business without Microsoft Office and Windows-based line-of-business programs, and Windows PCs will be the only way to do that.

The PC era is coming to an end. Keep your eye on Chromebooks!