Pokémon Go And The Future In Front Of Your Face 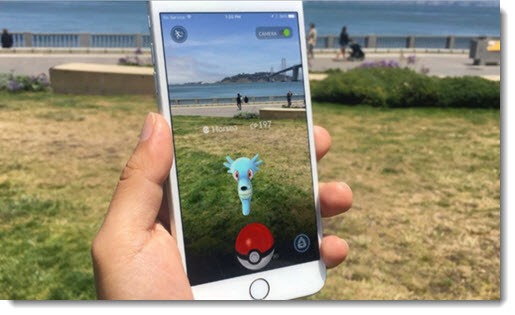 Pokémon Go was the most downloaded app in its first week of release in the history of Apple’s iOS App Store. Everyone has been playing Pokémon Go. It is the biggest example yet of Things That Unexpectedly Become Worldwide Obsessions Even Though They’re Pointless (TTUBWOETTP). (Also see Gangnam Style, vuvuzelas, Grumpy Cat, Flappy Bird, ice bucket challenge, and PewDiePie.)

The game doesn’t matter. It’s already on the decline. There are no lessons to be learned for the next viral hit; no one knows why one thing becomes a worldwide obsession and another is ignored. The companies behind Angry Birds and Candy Crush Saga are fading away because lightning strikes look predictable compared to guessing what the Next Big Thing will be.

The technology, though – that’s the important part. Millions of people around the world have now had their first experience with augmented reality. What they’re really seeing on the phone screens is the future.

Let’s see if we can get you oriented in a few words.

There are two different experiences that are being developed by companies worldwide. 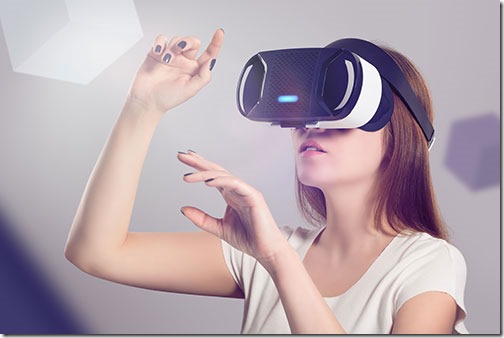 Virtual reality covers your eyes so you can’t see the real world. The only thing you see is a world created by a computer. The best example – and the focus of all the companies releasing products this year – is to immerse you in a game where you can look in all directions and move around. Imagine playing a Star Trek game but instead of looking at a computer screen or a phone screen, you’re looking all around at the bridge of the Enterprise, moving your head to see everything above, below, and behind you. The first virtual reality goggles – the Oculus Rift and HTC Vive – have been released, and in a few months PlayStation VR goggles will be available for PlayStation 4 owners.

These are early days. The first VR goggles are heavy and some require unusually powerful computer equipment to run successfully. Picture quality is uneven. Game developers are still not sure what to do with all the extra environment. And worst of all, many people are susceptible to nausea when they’re wearing virtual reality goggles, and no one knows yet whether that will be cured by better equipment or if it’s just inherent to the experience.

If you’ve ever used Google Cardboard, the inexpensive viewers that hold your phone and give you a glimpse of a 360 degree world, then you’ve had an early taste of virtual reality. Roller coasters are being fitted with virtual reality headsets that put you in an imaginary world with motion that matches the coaster to convince you that you’re flying in space or the like.

There will be lots of attention paid to virtual reality for the next couple of years, and it’s interesting technology, to be sure. But augmented reality will be far more important in the long run. 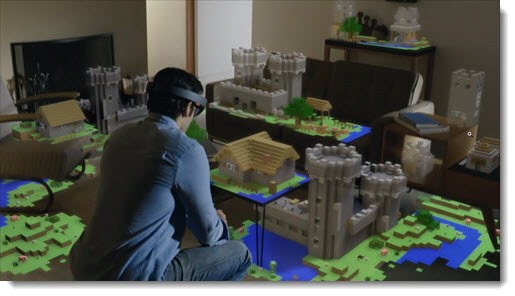 With augmented reality, you continue to see the real world, but with extra stuff overlaid on top of it.

Pokémon Go uses your phone’s camera and GPS to show you the world in front of the phone. Then it overlays a Pokemon character so it appears to be in the scene. That’s one kind of augmented reality – simple but pretty cool, right? You’ve probably turned that off already after you saw what it did to your battery life but the idea is good, anyway.

Now race ahead a few years and imagine that lots of technology barriers have been surmounted. You have something that displays the real world with extra information on top of it, not just from knowing where you are on a map but also by examining the objects in front of you and analyzing how to mesh them with the computer data. The Minecraft picture above is a bit misleading. If you were standing there holding the camera that took the picture, you’d see a couch and a coffee table. The view in the picture shows you the world as seen through the Microsoft Hololens strapped on the player’s face, with the house on the coffee table and the castle on the couch.

Games will be the entry point for many people but there are much more important developments in store. Imagine that a mechanic can get an overlay identifying every part in the equipment in front of him. A doctor can get information during surgery about what’s she’s seeing. As you drive down the street, you can see addresses and business names above the buildings. You can see what new furniture will look like in your home with a high degree of accuracy. Scientists at NASA are using Microsoft’s Hololens headsets to walk around the surface of Mars, using data collected by the Curiosity rover.

Everything changes if we can merge the information available online with the picture of the world that we see with our eyes.

In these early days, we have Pokemon plopped on the screen in front of the real world, but that’s not all. You’ve experienced an early form of augmented reality if you’ve ever held up your phone to get floating displays of nearby restaurants and businesses, like the picture above. There are many overlays for tablets and phones already being used for marketing. There are apps in stores that show you how you look in different clothes or with different types of watches without having to try anything on. When you watch a football game and you see the cool first down line that appears to be painted on the grass but is actually electronic, that’s a form of augmented reality. 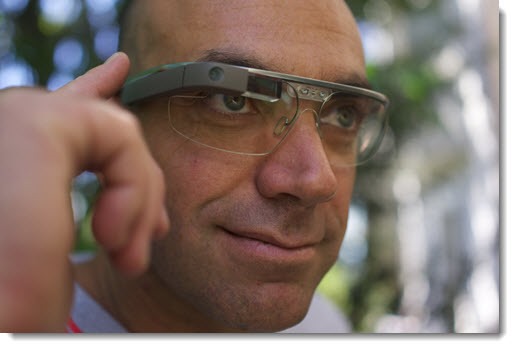 Google Glass was an experiment with a type of augmented reality. Did you ever see anyone wearing Google Glass? It resembled eyeglasses with an odd bit on one side holding a camera and some of the electronics. You’d see the real world through the clear lenses, but you’d have additional information in one corner of your field of vision. The display might show message notifications and simple search results, but experiments also went on for more serious uses – for healthcare professionals to be able to review charts, live-stream patient visits and procedures, and observe remote operating theatres, for example. The first release of Google Glass was not successful but that’s not a surprise – there will be many false starts on the road to developing augmented reality.

There are a number of areas that need technological breakthroughs before augmented reality becomes commonplace. There is no way to predict breakthroughs, so your prediction of how long the developments will take depends on whether you’re an optimist or a pessimist.

The first thing we need to experience augmented reality is an interface that gets information into our field of vision. Google Goggles was the first (but not the last) experiment in projecting information onto eyeglasses. Microsoft’s Hololens uses bulky goggles packed with technology so they can work independently without being tethered to a computer. Much early effort will be devoted to layering information onto a tablet or phone screen. 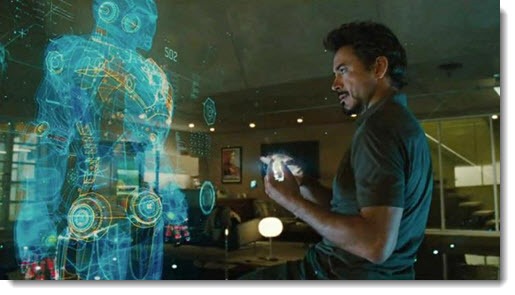 The first science fiction efforts are already underway to create an interface that can work in contact lenses. How about implants in the eye? Or perhaps holograms where the picture just appears in the air in front of you, like Tony Stark has? It sounds unlikely, sure, but all it takes is the right breakthrough and a lot of smart people are looking for it.

The second thing we need is a way for the system to accept user input. This is surprisingly tricky! Apple has proven with the Apple Watch that it’s almost impossible to input anything useful on a very small screen. We need some way to do a search for the information we want, or to turn various layers on or off. Experiments are under way to control our devices with speech (Siri, Google Now, Cortana, Amazon Echo); with hand and arm gestures (think of Tom Cruise in Minority Report); and virtual keyboards (which you’re already using on your phones and tablets). In the future it might be smart clothing. Or brain waves. Who knows?

If you’re a science fiction fan, don’t miss Rainbow’s End by Vernor Vinge, which imagines our world a few years from now when augmented reality contact lenses have become commonplace. The story is wild, of course, but the concepts are sound even though it was written nine years ago. An early scene in the book involves something simple but profound – a meeting between people in different locations who can each see the other participants sitting in chairs at the table with them. That’s the simplest application of the technology but it’s a fundamental change in collaboration.

It will seem like a long time before augmented reality lives up to its science fiction promise, and there will be many failed attempts along the way. But the future is right in front of you, in that little Squirtle dancing on the phone screen.