Amplifi! Orbi! Luma! Eero! And Other Words About Wi-Fi 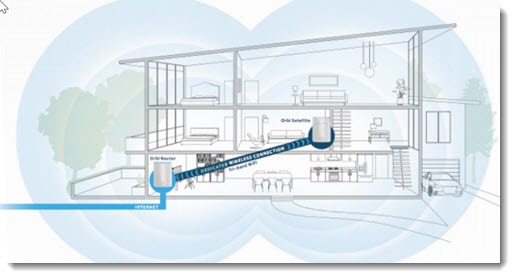 “Before we begin our banquet, I would like to say a few words. And here they are: Nitwit! Blubber! Oddment! Tweak!”

Before we begin our article about Wi-Fi mesh networks, I would like to say a few words. And here they are: Amplifi! Orbi! Luma! Eero! Thank you.

Wi-Fi is taking a big step forward in homes and small offices this year.

Almost everyone at home or in a small business relies on one device broadcasting the wireless signal. If the signal doesn’t cover part of the home or office, there has not been any easy way to solve that problem. “Range extenders” have never worked.

Suddenly there are lots of new devices that make it easier to set up a home or small business Wi-Fi mesh network that covers the entire building. The concept is the same for all of them: Two or more devices broadcast the Wi-Fi signal so your devices can connect to whichever one is closer, without requiring you to give it any thought.

It probably seems like that should have been possible already. After all, when you go to a hotel, Wi-Fi covers the whole hotel, right? It turns out the hotel has paid quite a lot for the enterprise-level equipment that makes the system work.

The new generation of equipment coming on the market now has three things in common.

(1) Each one simplifies setup to bypass networking jargon as much as possible. Typically the setup is done with a phone app. Some of them provide feedback by changing the color of lights on the devices.

(2) Each one uses two or more devices that are designed to talk to each other about the wireless behind the scenes. You don’t have to know anything about networking for that to work.

Before I tell you any details, a word of caution. I’ve never seen one of these devices – never touched one, never gone through the setup, no personal experience to know if they live up to their promises or have quirks. All I can tell you after years of experience is that the idea behind these devices makes sense. It is exactly what you have needed for a long time.

First, the concept, then some notes about the models on the market. You have to understand a bit of jargon, but only a bit.

Stick with me while I generalize.

There are two things happening to your Internet connection when it comes into the building.

•  You have a modem. It takes the signal from your ISP and turns it into something that your devices understand.

•  You have a wireless router. It takes over and makes it possible for multiple devices to use the Internet connection. Typically it’s broadcasting the Wi-Fi network. Wired devices plug into the ports on the back of the router.

Comcast or AT&T might have given you one box with blinking lights that does all of those jobs. Or you might have two boxes, very common – the modem from your ISP, and a wireless router for everything else. You might have three or more boxes – the modem, the router, and separate wireless access points.

The new Wi-Fi devices replace the wireless router. You still need the modem from the ISP. If you have an all-in-one box or you prefer to use your existing router, you can still use these new devices, but you might wind up learning some network vocabulary (“bridge,” “double NAT”) before you’re done.

Think about where your Internet equipment is now. The modem and router are usually in a closet, a back office, a server room, or the garage. It’s seldom the place you would pick to broadcast a wireless signal that covers the whole premises.

The new mesh network devices come in a box with two or three attractive little devices. One of them plugs into the modem in that closet or back office. Usually it will be replacing the existing router.

You’ll then walk towards the center of the building with the second device. You’re looking for the place where the two devices are able to have a strong connection to each other, and the second one can broadcast an overlapping circle that covers more of the building.

Look at the picture at the top of the article. That’s the idea. 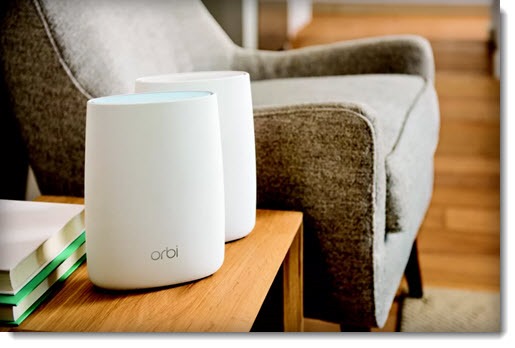 Netgear just announced Orbi, shown in the above picture, and will begin shipping them later this month. For $400, you’ll get a pair of devices – one to sit near the ISP modem, one to position in a central location. With luck you’ll think they’re attractive enough to sit out in the open for a better signal, instead of under a desk or in a closet. Netgear says the pair of devices will be able to cover up to 4000 square feet with a strong wireless signal. Netgear claims that the two devices will talk to each other on a dedicated channel that is different from the 2.5/5Ghz channels used for the Wi-Fi, meaning the chatter between the two devices will not overlap or interfere with the wireless connection to your phone or laptop. That’s an elegant and creative solution. You know, if it works.

Setting up the Wi-Fi network is done with an Android or iOS app. A light on top of the second device will tell you where to put it – magenta for a strong signal, amber for a mediocre signal, blue for out of range. And that’s it for setup. When you connect to the Wi-Fi, your device will automatically pick the one that’s closest, and switch from one to the other automatically as you move around.

You will be able to add another Orbi or two if you need even more coverage. But don’t get too ambitious: these are not enterprise devices and you’re not going to run a hotel with Orbi.

Netgear claims that Orbi has advantages over Eero and Luma, two competing devices already on the market that have generated much buzz in the tech press. Both Eero and Luma provide three devices instead of two to get similar coverage to what Netgear claims. They’re smaller and less conspicuous, but that’s partially because they have to be closer to each other than Orbi devices, and they don’t have that separate channel to handle communication among the devices separate from the Wi-Fi traffic. Both systems are expensive, like Orbi, and you can discover many people pointing out quirks in reviews online now that they’ve been available for a few months. Eero and Luma are both startup ventures trying to beat the established companies like Netgear to market. Reviews are generally complimentary but it feels like both Eero and Luma need time to mature – and Netgear and the rest may not give them much time.

Prices are in flux as all this new equipment hits the market and competes with each other with specials and discounts. Kits will be somewhere between $300-500, far more than the simple $100 Linksys router that still sits in many homes and offices. If you need the extra coverage, it’s a small price to pay. Enterprise-level equipment for extended coverage has cost far more in the past, both for the equipment and for a network specialist to set things up.

The Eero devices can be found at Amazon here, and the Luma devices are here. 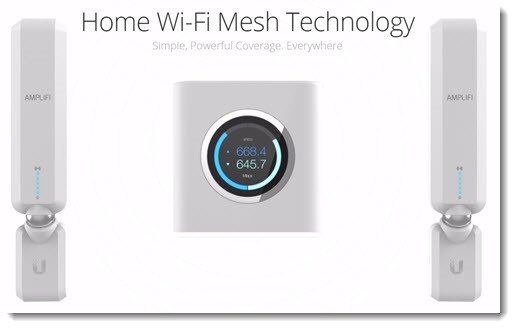 Last and possibly best. Amplifi is the first home product from a division of Ubiquiti, the company that I’ve relied on for its enterprise-quality access points for the last few years. I wrote up the Ubiquiti Unifi products here and have set up many of them in homes and offices. They require a bit of expertise to set up and maintain, but the payoff has been extended range that goes far beyond any other comparably priced equipment, and rock solid reliability. Everything connects to Unifi wireless access points, and everything stays connected. I’ve never had to power-cycle a Unifi wireless access point. I’ve never had to answer questions about why some device can’t connect to one. They just work.

So I have high hopes for the Amplifi devices from the same company, announced a few months ago and just starting to ship. There are three versions with similar features, each one stepping up the strength of the Wi-Fi signal, ranging in price from $199 to $349 for a kit with a base unit and two mesh points. Each piece is smaller than you’d expect from the pictures. The mesh points plug directly into a wall outlet and hug the wall, instead of sitting out on a table. Setup is similar to the others, using a phone app and LEDs on the mesh points to help get them placed correctly. Complimentary reviews are starting to appear – there are samples here, here, and here – and the reviewers seem to be calling out the same things that have made me a fan of other Ubiquiti products. “Once configured, things just sort of worked—which is exactly what you want in a system like this.” “What I do know is that the Amplifi has served up a rock-solid network since I plugged it in.” “The performance of this platform is simply amazing. And I’m not really talking about pure numbers here, it’s more about what you feel when you use your smartphone around the house or have your laptop out on the deck or patio, you feel connected.”

At the moment it appears that Amplifi is only being sold direct from Ubiquiti. Perhaps the company is still ramping up production.

It’s worth noting, though, that there is a huge range of expectations that people bring to their networks. All of the home mesh network devices are designed for simple setup – and that means they may not offer options that you think simply must be included. Make sure you choose wisely. Some examples of features that may or may not be supported:

If you’re frustrated by the Wi-Fi coverage in your home or office, relief may be in sight. This will be an active category and you can expect more announcements. You may have a mesh network soon.

(12/07/2016: new mesh network devices are appearing at a rapid pace. Look here for an Ars Technica review of the new Google WiFi mesh kits, plus the Amplifi HD and another new entry from Plume.)