If you’re a regular Spotify listener, you’ve got to check out the new Daily Mix playlists!

Before we get to that, start with the advice: if you listen to music, you should have a paid Spotify subscription. For $9.99/month, you can play just about anything from the entire history of recorded music on demand. Want to listen to some Beatles? The whole catalog is at your fingertips. Want to listen to a song in the news that was released yesterday? It’s on Spotify, plus or minus a handful of over-publicized “exclusives.”

By itself, that’s a remarkable change in the world. The MP3 collection that I had lovingly curated for a decade was immediately obsolete. Spotify lets me listen to anything I can think of on my phone, on my computer, in my living room thru the Roku box connected to my TV and receiver, in my car, and in the kitchen through our Amazon Echo. Spotify has done deals with just about everybody, so you can play music through Spotify in more different places than any other music service. (Sonos finally signed up to allow its systems to be controlled from the Spotify app, starting next month.) I can start playing something on my phone, then instantly switch it to my computer or the Echo or another device with a single click.

Seriously, don’t obsess over the ten dollars. If you haven’t done it yet, go subscribe to Spotify. It has a free tier but you can’t choose what to play if you only have the free account, which misses the point. If you have any recollection of buying music, whether albums, CDs, or iTunes downloads, you ought to understand that ten dollars a month is nothing.

Then get in the habit of playing your music through Spotify. Choose things you know you like. When you get to an album you enjoy, click the “Save” button to make it part of your library. Create playlists. Whether you’re revisiting the 70s or following a current trend, the main thing is to use Spotify.

If you use it regularly, Spotify will reward you with new features that get better the more it knows your tastes.

In August, Spotify added the Release Radar playlist, which might be even better than Discover Weekly. Release Radar focuses on brand new music by the artists that you listen to the most. It’s impossible to keep up with the flood of new music, so you probably have no idea whether there’s anything new by the bands you enjoy. Aging baby boomers might have missed the new album by Paul Simon or the live collection from the Grateful Dead’s summer concerts or the amazing album that Tom Petty released this summer with Mudcrutch. (Seriously, if you’re a Tom Petty fan, Mudcrutch 2 is filled with songs that stand with his very best work.) Prefer country music, or EDM, or acid jazz? You’ll get a selection of new material mostly from artists you’ve listened to before, updated weekly.

The Verge wrote an interesting article about the difficulty of assembling that list. By definition Spotify doesn’t have much data about brand new music. It doesn’t know how many people will stream it or put it on a playlist or share it with friends. Its algorithms are working overtime to categorize new music, compare it to everything you’ve listened to during  your entire listening history, and narrow it down to a few tracks that will be on  your playlist. The engineering manager at Spotify in charge of Release Radar describes it this way: “Some of the innovation happening now for the product is around audio research. We have an audio research team in New York that’s been experimenting with a lot of the newer deep learning techniques where we’re not looking at playlisting and collaborative filtering of users, but instead we’re looking at the actual audio itself. It would basically be automated ways of figuring out what music is similar to other music, looking at all the different audio signatures of the song.” 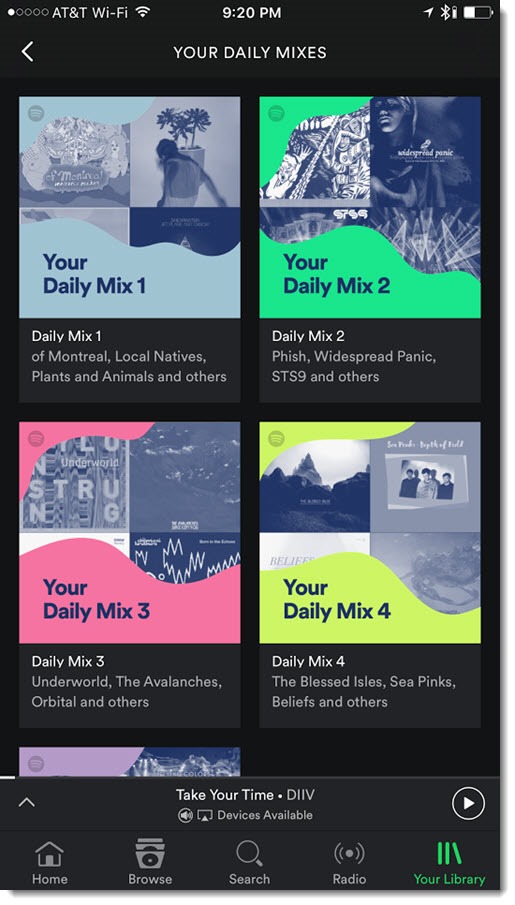 This week Spotify unveiled Daily Mixes, which might be the best playlists yet. Every day Spotify presents playlists that mostly have music that comes from your Spotify collection or the music you’ve already listened to. If you’ve listened to Spotify frequently, you’ll get multiple Daily Mix playlists sorted into different genres. In the screenshot above, you’ll see my Daily Mix playlists this evening – alternative music, jam bands, electronic music, oddball new music, and progressive rock. You’ll get a different selection that fits your tastes. About 75% of the music will be familiar songs, 25% will be music that is new to you but fits alongside the other songs. The lists are tweaked daily, maybe as simple as shuffling the order of the songs, and rebuilt weekly. You can influence them by hitting the heart to add a song to your collection or hitting a “ban” button to keep a song from appearing again on future playlists.

In other words, Daily Mix is a radio station that is more tuned specifically to what you like than any customized station ever has been before. All the music services (including Spotify) can start a “radio station” when you supply the name of an artist you like so it can guess at other things you might like. If you’ve ever done that, you know the selection can go way off track very quickly. Even worse are stations that are curated by human beings trying to predict the taste of global audiences and assemble playlists to appeal to the masses. Works fine if you don’t actually care what’s playing. Nothing wrong with that but I’d rather have something that matches my eccentric tastes a bit more closely.

If you’re a regular Spotify user, you’ll find Daily Mix at the top of the Spotify Library menu on your phone. Only on the Android and iOS apps so far; eventually it will turn up on the web player and desktop versions of Spotify. (Pro tip for listening to Daily Mix on computers: start a Daily Mix playlist on your phone, then hit “Devices Available” at the bottom of the screen and switch it to your computer.) 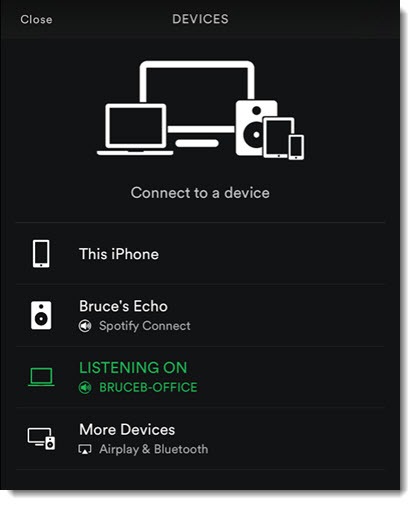 New Spotify users won’t see these playlists. You’ll have to select music for yourself or start with some of the generic Spotify playlists (there are hundreds) while the service learns your tastes. You’ll likely see Discover Weekly and Daily Mix playlists appear after a couple of weeks of regular use. There will be somewhere between one and six Daily Mix playlists depending on how eclectic your tastes are.

Spotify has huge mounds of data about people’s listening habits and it’s working harder than any other company to use the latest deep learning discoveries to analyze that data and spin it into playlists that will draw you into the service and make it a habit. The way the playlists are structured – the weekly refresh, the need to return to them to save tracks that you might want to listen to later – is designed to create habit loops that will keep you engaged. Here’s a fascinating article about Spotify’s strategy to become a habit-forming product.

Can you tell I just love this stuff? I’ve been a music junkie my whole life and in some ways the experience of discovering new music is more exciting than ever. The world is awash in fine music, regardless of your taste. Go and listen to some tunes!