Microsoft Hides Control Panel For Your Own Good 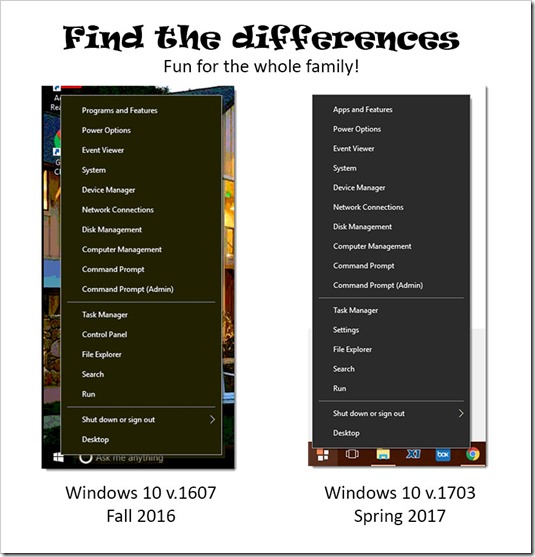 The picture above shows the menu that comes up when you right-click the Start button in Windows 10. Many of you haven’t seen it. It’s full of things that burrow deeply into the system controls. That’s why it’s usually called the “power user menu.” I use it constantly.

Let’s see how many you got!

(2) There’s no shortcut to Control Panel. It’s been replaced by a shortcut to Settings, which is already conveniently accessible from the left-click Start menu.

It’s a tiny example of a troubling pattern for Microsoft. Windows 8 introduced a full-screen Start menu that no one had asked for, with no built-in way to return to a familiar Start menu. The result was a PR disaster that cost Microsoft dearly. Today Microsoft is trying to force us to give up familiar Windows applications and use an app store that no one has asked for and that is widely shunned by developers and users. Microsoft is pushing that to the point of absurdity by selling new premium laptops that will literally not be able to install any familiar Windows programs without an entire operating system upgrade.  It’s for our own good! If we would just surrender, Microsoft is sure it knows what is good for us!

Trying to force us to use the Windows 10 Settings screen is the same thing. It’s for our own good! “After all,” Microsoft says, “the old Control Panel is a legacy. The new Windows 10 Settings screen is full of white space and simple toggles and it looks so damn cool. If only the stupid power users would use it!” If pressed, perhaps a few Microsoft engineers would quietly acknowledge that a huge number of settings have not been migrated into the new Settings app, leaving Control Panel as the only way to get to many settings that are crucial to working with Windows. “But, but,” Microsoft sputters – “you power users aren’t even trying! You’re going straight to Control Panel / Programs / Uninstall A Program and you’re ignoring our lovely new screen in Settings / Apps / Apps & Features, which is full of white space and simple toggles, ooh, it makes us so mad!”

So Microsoft takes away the shortcut in the power user menu out of spite so we’ll learn our lesson. It may annoy us, it may make us irritable, but shut up – it’s for our own good.

Pro tip: click on Start and type control. Control Panel will open up. And at the glacial rate Microsoft has been moving things into Settings, we’ll need Control Panel for a long time to come.

Start10 users: if you want to see the power user menu when you right-click on the Start button, open Start10 from the Start menu, then click on Desktop / Advanced. Check the box: “Show Win+X menu when right-clicking the button at the bottom of the screen.”