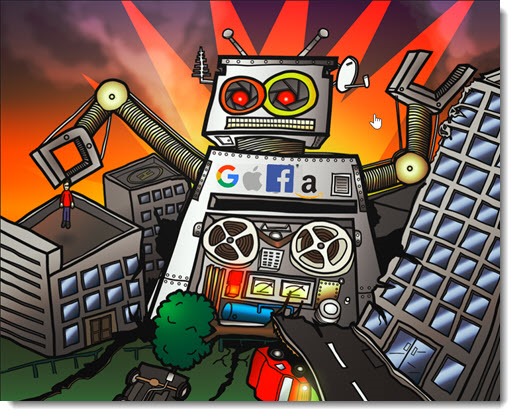 The repeal of Obama-era net neutrality rules by the Federal Communications Commission will take effect on April 23.

This week the Senate approved SESTA – a new law that purports to crack down on sex trafficking – after the House approved it last month. It will be signed into law shortly.

Reasonable people can differ on the merits of each of those issues. Personally, I consider them to be unmitigated disasters that will harm the public and contribute to our social decay, but I’m not going to try to convince you of that. These are complex issues. Feel free to believe that these are good policies that will brighten your life and make you safe. You’re wrong but that’s okay, I’ll still be your friend.

Instead, I want to call attention to a single thing that they have in common: each will contribute to the continued dominance by the large tech companies that have ever-growing power over our lives.

Law and policy in the United States is designed to preserve and advance big companies, whether they ask for it or not. It’s one of the many reasons that it is increasingly difficult for new companies to challenge entrenched mega-corporations.

The central concept of net neutrality is simple: data should be treated equally and charged equally as it travels from online sites and services to you. The end of net neutrality means that Comcast, Verizon, and the other huge ISPs and telcos can charge different amounts to websites and online services to move data from place to place, and can change the speed, reliability, and features of your internet connection based on your plan.

On the one hand, it means Netflix can pay Comcast for preferred access to subscribers to make its service more reliable so movies don’t stutter. Sounds okay, eh?

It’s easier to imagine unfair results on the consumer side. For example, Comcast might set up different Internet packages, like cable TV packages. You might be offered one price for access to a few hundred websites, another price for access to the entire web. Or Comcast might have a cheap plan that gives you internet access as long as you agree to watch ads in between moving from one website to another. Or imagine that Comcast does a deal with Microsoft and your Internet access is unlimited, except that all searches are done with Bing and you can only get access to Google for a few more dollars each month. Technically all of those are easy to do.

But there will be a lot of scrutiny of how the ISPs respond to the end of net neutrality and they will likely not act like monsters, at least not right away. Instead, they’ll do things that appear to be friendly. For example, Verizon might offer you a package with unlimited access to Netflix that does not count against your monthly data allotment. It’s called “zero-rating” and it sounds totally innocuous. Everybody likes to get something for free. Money is changing hands behind the scenes but from your perspective it’s a win, right?

The end of net neutrality will harm innovation and make it less likely that new companies will offer services to compete with entrenched giants. This harm is invisible. You will never know what new video streaming service might have been introduced to compete with Netflix. If Netflix has the deep pockets to pay Comcast and Verizon for high quality service, and you can stream Netflix without any data caps, (1) you’re less likely to stream another service that would use up your data allotment, and (2) venture capital investors will know that and will be less likely to fund a new competitor.

I’m using Netflix as an example but exactly the same logic applies to every kind of web service. Innovation is threatened when suppliers and ISPs/telcos are working together to preserve the status quo. “Working together” doesn’t mean they’re best friends. The relationship between the tech giants and the ISPs/telcos will be contentious. But from our perspective, their fights over money won’t change the result, which is that the established companies will create deals that discourage newcomers.

FCC Chairman Ajit Pai says that antitrust laws will protect consumers from bad behavior that might result from the repeal of net neutrality, but harm-to-innovation cases are notoriously difficult to bring under US antitrust laws. Economist Hal Singer is often cited by Pai as a prominent opponent of net neutrality rules, but Singer acknowledges that the loss of innovation is a very real problem that antitrust laws won’t address. Individual companies, especially companies yet to be formed, won’t bring cases “based solely on such a difficult-to-prove antitrust harm.” Here’s Singer in a recent paper on the subject, comparing the climate today to the time of the Microsoft antitrust case in 2000:

“Even antitrust agencies shy away from bringing harm-to-innovation cases. Although the DC Circuit determined that Microsoft had liability without the Department of Justice having to demonstrate that the nascent threats would have developed into full-fledged competitors, the antitrust laws have evolved in a manner that makes it difficult to address discriminatory behavior that may adversely affect innovation. Increasingly, the agencies and courts defer to the business judgments of platform providers.”

Small companies don’t have the budget to compete with Netflix or Amazon when deals are negotiated with Comcast or Verizon. We’ll never know what new companies don’t come into existence to offer video-conferencing or community platforms or media streaming or innovative journalism or gaming. Innovation will be stifled. The big will grow bigger.

SESTA is the “Stop Enabling Sex Traffickers Act.” The House and Senate passed SESTA by overwhelming margins and it will be signed into law in the next few days. The law provides that website can be deemed legally responsible for material posted on the sites that relates to illegal sex-trafficking if the website has knowledge of the material.

Stick with me for a short history lesson so you know why this is a really bad idea.

Lots of websites allow people to post material online. Facebook is entirely made up of material posted by users. So is Reddit. News sites allow comments on articles. Amazon encourages you to post reviews. Community bulletin boards are built on user messages. YouTube is a vast collection of videos uploaded by hundreds of millions of users.

Almost every website that allows users to post comments or opinions relies on moderators to filter the comments. Otherwise the comments turn into a place for internet trolls and automated bots and terrible people.

For twenty years, websites have relied on a single sentence in a law that has protected freedom of expression and innovation on the internet. Section 230 of the Communications Decency Act of 1996 says that websites are not liable for material posted by users. There are exceptions for certain kinds of criminal activity and intellectual property violations and more, but that’s the law in a nutshell.

The protection from Section 230 has allowed innovation and free speech online to flourish. From an article by Joe Mullin of EFF: “Platforms are free to moderate speech in a way that works for them—removing spam or trolling comments, for instance—without being compelled to read each comment, or view each video, a task that’s simply impossible on sites with thousands or millions of users.”

That’s the protection that SESTA takes away.

Imagine that a website monitors comments but misses something that offends. Under SESTA, a lawsuit could be brought claiming that the website had “knowledge” of the material. The law is unclear and an unclear law creates opportunities for lawyers to wrangle. Viacom and YouTube fought for years over the word “knowledge” in a copyright case. That’s the moderator’s dilemma. If you moderate comments at all, you will be deemed to have knowledge of everything posted to your website, and therefore liable if you miss something offensive.

An amendment to SESTA was proposed to address the moderator’s dilemma and make it clear that websites would not be automatically liable for all content if they merely used a filter or do moderation to block some content. The amendment was withdrawn when it became clear there was no support.

Okay, so SESTA means that websites have to be careful about moderating comments and user-uploaded content. What’s the problem?

Facebook, Amazon, and Google can afford to implement complex, expensive tools to moderate the content posted by users. They’ll use artificial intelligence, algorithms, and teams of moderators to make sure nothing is posted that violates the law. When they are sued, they will employ teams of lawyers to defend the lawsuits. They are giants.

The result is that some message boards and comment systems will close down. Others will move to a far greater degree of censorship of what can be posted. And others will paradoxically turn off all monitoring, on the theory that they cannot then be found to have “knowledge” of whatever awful things get posted.

There are a lot of forces that think the idea of a highly filtered Internet is just swell. Hollywood has long believed that websites should be liable if material is posted by users that infringes copyright, regardless of whether the website has knowledge of it or not. In fact, there’s a good chance that media companies are lurking in the background of this new law, using “sex trafficking” as an excuse that opens the door for similar rules about copyright infringement.

The big companies will survive and prosper without safe harbors. The rest of the internet, though, will suffer. EFF: “Without safe harbors, the Internet will be a poorer place—less free for new ideas and new business models. That suits some of the gatekeepers of the pre-Internet era just fine. . . . (Automated filters) will create a huge barrier to entry for startups, non-profits, and hobbyists.”