How To Measure Your Internet Speed 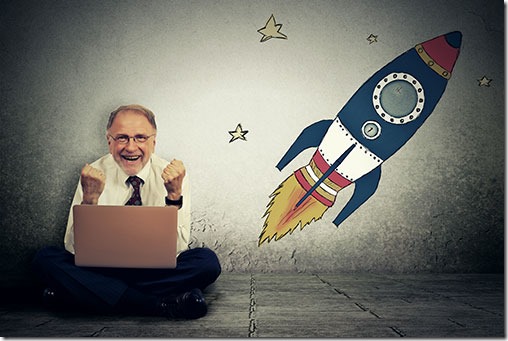 This is a basic tip but it comes up all the time. Everyone needs a fast Internet connection. You might want to check your Internet speed out of curiosity, or because you suspect that your ISP is not delivering the connection that you were promised, or because some problem has developed with your equipment or your network.

Long pedantic answer: Let’s get a basic understanding of what to expect when you check the speed of your connection, then I’ll tell you about some of the options for speed tests.

What do you need to know before you run a speed test?

Here are some basic principles to keep in mind.

•  There is no “best” speed test. There is no right answer. A network technician with specialized tools could connect directly to the ISP modem or point of entry and come up with an accurate number, which would probably be different from any result you get from a computer running a test from a website. You’re not a network technician with specialized tools. That’s why the important thing is to use the same test consistently and look for patterns.

•  Figure out what speed was promised by your ISP. Download speeds on a Comcast plan can range anywhere from 60Mbps to 250Mbps or more. Sonic sells anything from 1Mbps to 1000Mbps, depending on location. You can’t complain about your speed to the ISP until you know what you are supposed to receive.

•  Always use the same tool to measure your Internet speed. Your results will be wildly different if you switch among different websites and apps. (More about that below.)

•  Always use the same computer to measure your Internet speed. Your results will be wildly different if you compare a computer connected to the router with a network cable, and a computer with a cheap wireless USB adapter hidden under a desk.

•  But also, measure at different times of day in case something is bogging down the whole system but only occasionally – a backup program or someone streaming video or playing online games, for example.

•  Download speeds will almost certainly be 4-8 times larger than upload speeds. That’s not a problem, it’s just the way home and small business Internet circuits work. (Larger businesses pay quite a lot for “symmetrical” circuits, where upload and download speeds are the same.) When you’re comparing, it’s easier to focus on download speeds. Don’t ignore upload speeds but don’t worry too much about them as long as they don’t drop to nearly nothing, to a tiny fraction of the download speeds; that might be an indication of a problem with the connection or router.

Now you’re ready to run a test and call your friends to boast about the big numbers, or despair and rend your garments if you see tiny numbers.

How do you run a speed test?

There are seven thousand Internet speed tests. I’m going to pick a few out arbitrarily because I like them. The first two are at the top of the list because they’re easy to find and easy to use. 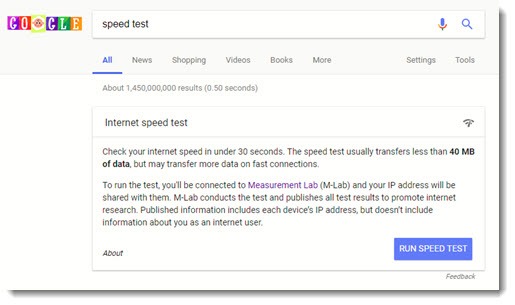 Google: do a Google search for speed test. Just type it into Chrome. You’ll see the box shown above, delivered straight from Google, with a button that says Run speed test. You’ll get a perfectly satisfying result. Google has partnered with an independent lab to run the tests.

Netflix: go to https://fast.com. That’s all. Just click on the link and it will run the test. Netflix relies entirely on your high-speed Internet connection, and it wants to help you blame your ISP instead of Netflix if video quality goes down because your connection is slow. Netflix recommendations: minimum 3Mbps download speed for standard video quality; minimum 5Gbps for HD video; and 25Mbps or more for Ultra HD content.

Ookla: Speedtest.net has been the number one search result for Internet speed tests for years. The owner, Ookla, provides the diagnostic software that runs a number of online speed test sites, but Speedtest.net provides the best experience. It chooses a nearby server (an important part of getting accurate results) and quickly returns smart and thorough results.

Ookla Speedtest app for Windows 10: Ookla has turned its speed test into an app that can be installed on Windows 10 computers. The app has one nifty advantage: the app will automatically keep a log of your prior results. That makes it far easier to track the performance of your connection and spot slowdowns. I haven’t done extensive testing but so far the app has returned results that bear no relationship to the results from the website, which is odd.

ISP speed tests: Many ISPs offer their own speed tests. Click here for Xfinity’s speed test, for example. There’s nothing wrong with these but they’re no more accurate than any of the rest, and it’s hard to shake the feeling that they might be tipping the scales a bit in their favor.

Microsoft Network Speed Test: Microsoft’s research labs created a Windows 10 speed test app a few years ago. I don’t recommend it. Nothing wrong with it but it’s not being maintained and doesn’t stand out in any way. It might even have some design problems that cause it to give inaccurate results. Here’s a blogger who was mightily unimpressed when he compared it to Ookla Speedtest. (“Entirely incompetent and created without much knowledge of decades old technologies.”)

Are there any examples of how these tests can provide different results?

I’m glad you asked. All of these tests were run in the space of a couple of minutes on the same computer, on a Comcast Business connection which is supposed to be 100Mbps down, 20Mbps up. Notice that the download speeds from the various tests aren’t even remotely similar. That’s why the important thing is to use the same speed test consistently and don’t get hung up on the numbers if they’re reasonably close to your contract level. 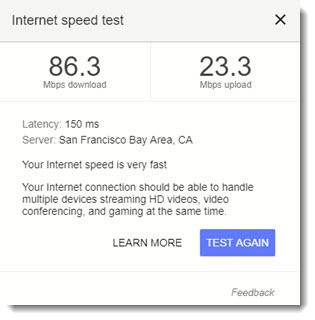 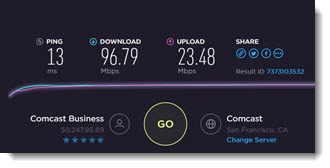 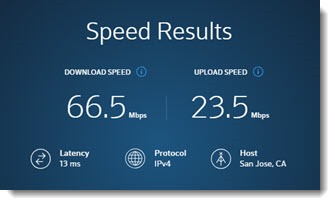 Note the upload speed in this one, which is just weird. 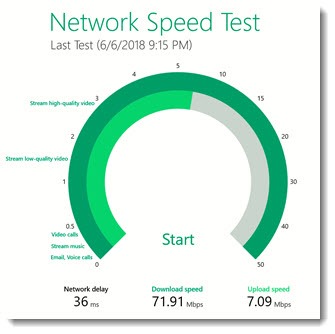 May all your connections be fast!