Make A Note To Try Microsoft To Do 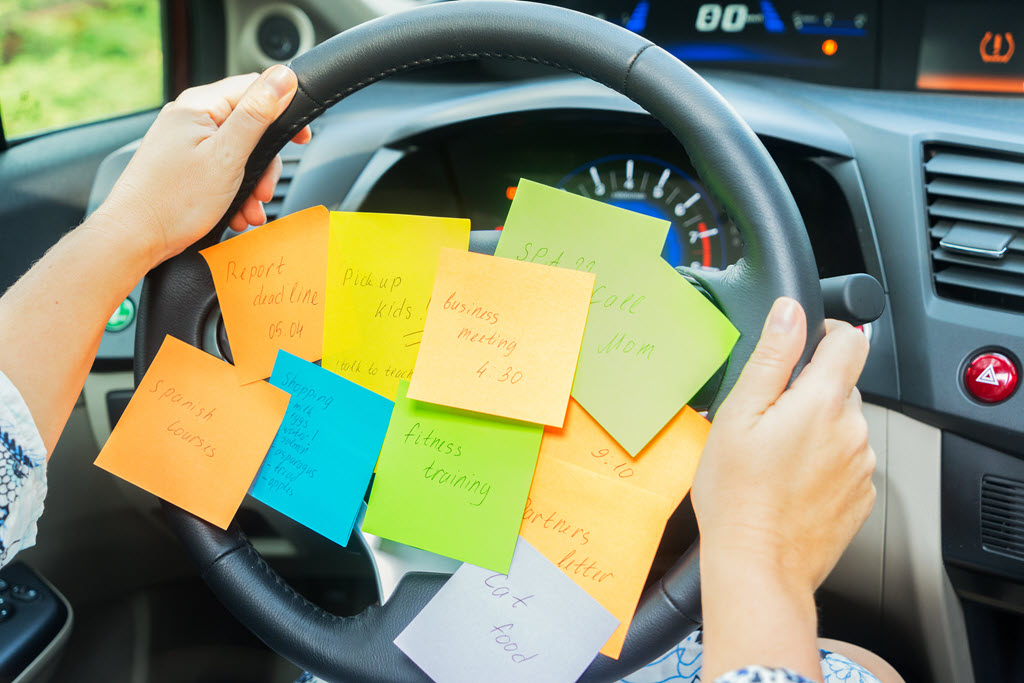 I want you to add something to your to do list.

Okay, what popped into your mind as the place you would put that? A notepad on the refrigerator? A post-it on the steering wheel? An app on your phone? A list in Outlook or OneNote? An Excel spreadsheet? Promising yourself that you’ll remember even though you know you’re lying?

The new item for your to do list is: check out Microsoft To Do, a simple task manager. Microsoft is now fully committed to Microsoft To Do as its central hub for task lists for business users and individuals. I’ve tried a lot of different systems for tracking to dos and I think Microsoft might have a winner.

Try it! It’s free and easy to use. But take this seriously! It won’t do any good to look at it for ten minutes, add a couple of things, then forget about it the next day. This is about possibly changing a habit. Commit to using Microsoft To Do for a couple of weeks until it becomes second nature. If it becomes part of your daily flow, it might be worth it. If you give it a fair chance and it doesn’t work for you, no worries, grab the post-its and start filling up the bottom edge of your monitor again.

Let me give you some background and a couple of thoughts about getting started. 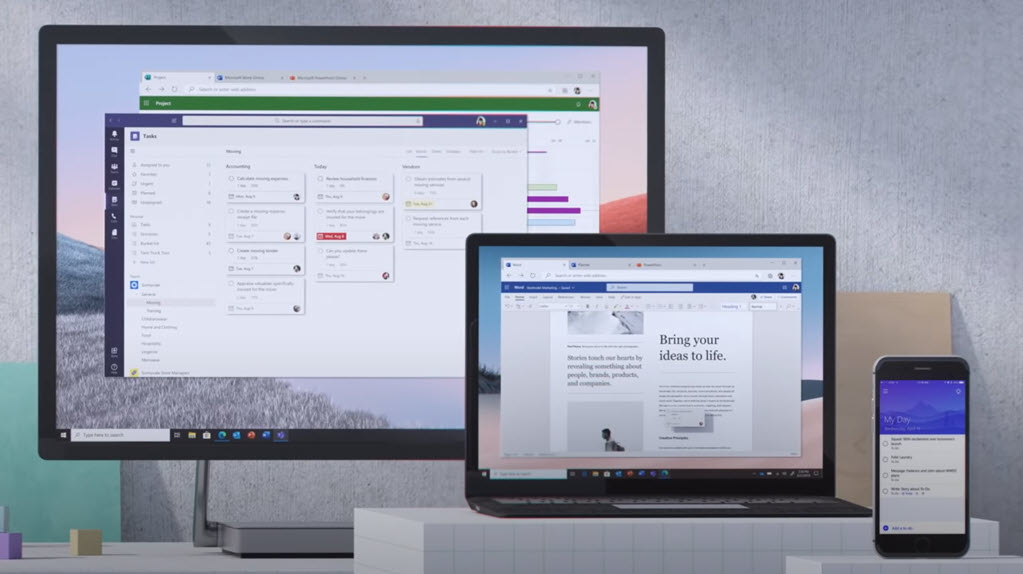 Microsoft To Do is a free to do list and task manager that can be linked to a business Office 365 account or a personal Outlook.com account. Your tasks can be accessed from the web or with apps for Windows, iOS, and Android. Changes are kept in sync on every device.

Tasks are also synced between Microsoft To Do and the desktop version of Outlook. There is one precaution if you currently use the task list in Outlook: do not choose Microsoft To Do if you depend on the Start date of Outlook tasks. That’s only going to be a concern for a very small number of people; if you don’t know what it means, don’t worry about it.

An overview of today’s to do lists

There are so many ways to use technology to keep track of your to do list.

Gmail users can use Google Tasks from the Gmail window or a separate app.

Google also offers Google Keep, my personal choice for filing miscellaneous bits of information. Keep is a solid choice for a to do list! I use Keep for our grocery list because I can add items by speaking to my Google Home hub.

The desktop version of Outlook has supported tasks since the beginning of time.

OneNote and Evernote handle any kind of list, including tasks and to dos.

There are literally hundreds and hundreds of phone apps like Toodledo, Todoist, Remember The Milk, and so many more.

Some of the apps sync from place to place, others don’t. Some are accessible in a web browser, some have a matching Windows or Mac app, some are only accessible on a phone. Some are simple, some are complex.

If you have a system for your task list and it works for you, use it. As always, the best solution for a technology problem is frequently the one you already know.

But I’ve been vaguely dissatisfied with each thing I tried over the years. I had a good system for tracking tasks for clients (more about that below), but it was hard to find a system for personal to dos that had three features: (1) reasonably simple; (2) accessible from all my devices; and (3) an easy way to create a task from an email message.

Enter Microsoft To Do.

A short history of Microsoft To Do

The desktop version of Outlook has always included a task list. Microsoft may know differently but my impression is that it is rarely used. You might not even realize it’s there – usually there isn’t enough room for its icon to show at the bottom of the left column, and most people don’t display it on the right side of Outlook mail or calendar. (Click on View / To Do Bar / Tasks. It’s empty, isn’t it? Thought so.)

It was never easy to sync Outlook tasks with a mobile device – even Microsoft’s Outlook app for iPhones and Android doesn’t show tasks. Similarly, none of Microsoft’s other lists in Sharepoint, Planner, Project, and OneNote had great options for handling a task list easily on a phone.

Five years ago Microsoft purchased Wunderlist, a popular task management app. Although there were vague promises, the Wunderlist team seemed to have dropped off the face of the earth. A couple of years later Microsoft released the first version of Microsoft To Do, an unsatisfying half-baked app that made it look as if the Wunderlist acquisition had been for naught.

The long-delayed payoff came last fall when Microsoft released a major update to Microsoft To Do, incorporating much-loved features of the Wunderlist interface apparently created by the Wunderlist team in their new home at Microsoft, as well as beginning the process of building To Do deeply into the Office 365 and Outlook.com ecosystems.

In November a Microsoft blog post made it clear that Microsoft To Do (and the enterprise version, Planner) is going to handle task management in all of Microsoft’s products and services. The user interface for tasks will be consistent, wherever you find them – on the web, in an app, or built into another Microsoft program. Under the hood, syncing is handled by the same technology that handles Office 365 mailboxes – reliable and secure.

Earlier this month, Microsoft took another big step: Microsoft To Do is now handling tasks for everyone using Microsoft webmail, both Outlook.com for personal accounts and Office 365 webmail for business accounts.

Click on the task icon in the lower left and you’ll be taken to https://to-do.office.com.

Click on the calendar/to-do icon in the upper right and tasks will appear in the right column in the same Microsoft To Do format.

If you use webmail, you can drag and drop an email into the task list to create a task in Microsoft To Do.

You can drag and drop items on the list. Add a star to important tasks. Put in a reminder that will pop up on your devices and in Outlook.

Microsoft intends to continue integrating To Do (and Planner, the enterprise task manager) with more of its services – integration with OneDrive, for example, so online files and images can be attached to a task.

And then there’s desktop Outlook.

The special case of desktop Outlook

The desktop version of Outlook is a legacy program with dozens of features that ought to be discarded or upgraded. It also has a huge base of business users who will resist any change, no matter how minor.

At the moment, Microsoft To Do syncs tasks with desktop Outlook for anyone with a business Office 365 mailbox, but the presentation in desktop Outlook is a mess. The task list in Outlook bears no resemblance to the consistent Microsoft To Do appearance everywhere else, and it doesn’t support the same features – basic things like drag and drop ordering, for example.

Microsoft is forced to tread lightly. Its roadmap for Microsoft To Do discreetly says, “There is additional work is planned to integrate To Do even more deeply with Outlook in the future.” If the world was simple, the “additional work” would be to rip out Outlook tasks and drop in Microsoft To Do, as Microsoft just did in webmail.

Here’s an example of why that’s complicated.

Desktop Outlook tasks can be set up with a Start date and a Due date. With some clever work, you can create tasks with a start date in the future, then set your desktop Outlook task list to display only the tasks that have already started. On the appointed day, the deferred task will suddenly appear in the list, ensuring that nothing is forgotten.

Michael Linenberger developed a wonderful and quite popular task management system for busy professionals built on the desktop Outlook task list. I used it for ten years. Click on an email, choose a start date in the future for a task, and then forget about it with perfect confidence that it will appear when it needs attention. Brilliant!

His system was also relatively difficult to set up, diving deep into Outlook view settings not normally seen by mortals, and the whole system took a hundred pages or so to explain.

Microsoft To Do doesn’t support start dates and doesn’t have any comparable way to surface tasks in the future. Microsoft To Do is simple. That’s the good news, remember? As a result, it more or less breaks Linenberger’s task management system.

And that’s the problem. There are more people in the world than you expect who depend on features of desktop Outlook tasks that are not present in the simpler Microsoft To Do interface. They will not go quietly into the new To Do world.

Microsoft will deal with that eventually, perhaps with kicking and screaming, and Outlook tasks will turn into another view of Microsoft To Do.

FYI: Michael Linenberger has moved on and is now featuring a simpler task management system that works perfectly with Microsoft To Do. You can download a free PDF version of his book, watch a few videos specifically about Microsoft To Do on his website, and buy a longer video course if you’re interested. He’s a good teacher! Recommended.

Try Microsoft To Do! Log in at https://to-do.office.com with your business Office 365 account or a personal Outlook.com address. Install the app on your phone. Install the Windows 10 app from the Microsoft store. Stay on top of your day!