SEARCHING FOR GODMODE IN WINDOWS 7

There have been countless blog posts about the GodMode Windows 7 trick. If you create a new folder – on your desktop, say – named GodMode.{ED7BA470-8E54-465E-825C-99712043E01C}, you will get access to a hidden list of hundreds of Windows settings, many of which are not listed in Control Panel. Whoa Nellie! That’s some powerful stuff! 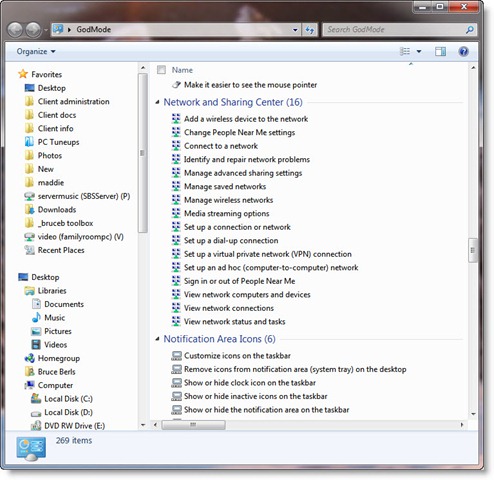 Here’s an article with screen shots of all the settings displayed in the GodMode folder.

It didn’t take long for the buzz to die down a bit. The first letdown was the discovery that the name “GodMode” (a tip of the hat to video games like Doom) was not part of the trick. The folder can be named anything. Whatever words appear before the period appear under the folder icon and as the title of the window. The Moist von Lipwig icon to the right displays exactly the same list on my computer.

The super-secret hidden list turns out to be a developer feature for easier access to power settings – modestly useful but not all that exciting. It’s not the only one. An article in early January identified twelve more strings that could be used to create folders full of shortcuts to different groups of system settings; a week later another article added a few more, for a total of 17 folders; a couple of days ago the list grew to 39 different folders that could be created if that was the kind of thing you were anxious to do. It’s not clear why you would do that. It’s turned into a geek sport with no practical application.

There is an important lesson to learn here, but it’s not about the GodMode folder. All of the tasks in the GodMode list are already available in Control Panel, but not all of them are listed in Control Panel: some of them only appear when you search for them. Ed Bott created this example:

The lesson for Vista and Windows 7 is:

Never hunt through the categories and lists in Control Panel. Not everything is listed there, making it appear that some features can only be reached in three or four steps.

Instead, always type a word in the search box in Control Panel to find a setting or a feature.

In fact, everything that you do in Vista and Windows 7 will be easier if you search for things instead of hunting through long lists. Find programs on the Start menu by typing the name in the search box at the bottom of the menu. Find your files by typing a file name or word in the search box in Explorer. Find mail in Outlook by doing a search, not by scanning through folders and subfolders. Make a conscious effort to use the search functions in Vista and Windows 7 – you might be surprised how quickly you can get things done.