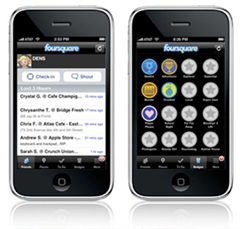 The new little device in your pocket knows where you are – and that’s the next thing that’s going to change the world. Location will be the most important thing that happens in technology this year, and in the long run it will likely be as significant as the rise of social networks in the last few years. You might not be part of this yet but don’t underestimate it!

For some people, this is hardly news. iPhones and Android phones have featured built-in GPS for a long time. Even basic GPS functions are constantly improving; Google announced another upgrade for Google Maps on Android phones last week that adds eye candy (wallpaper showing a live map of your location), as well as redesigning the results screens and adding new gestures to make it easier to use.

For a while, the novelty of pulling out a phone that already knew where we were was sufficient entertainment, but the next wave is on, led by FourSquare and Gowalla, two enormously popular phone apps.

Each app allows you to “check in” at a location, then builds an experience on top of that. FourSquare creates a kind of game around your presence at a particular place – you earn badges and might even become the “mayor” and get a free drink. Gowalla has added more features for social interaction, with comments and pictures added to your check-in.

What does it all mean? Your phone will know very basic details: where you are, where your friends are, and who has access to that information. No device has ever been able to accumulate that information easily before. The products in development will build on that and weave it into the social networking we already do.

Over in the corner is the 80,000 pound gorilla, Facebook, the most popular iPhone app of all time, the app that comes preinstalled on all Android phones, which is due to roll out location features any time now. There is no official word from Facebook about what to expect but either your phone will be allowed to update your Facebook status with your location directly or Facebook will allow apps like FourSquare to update your Facebook status when you check in to a location – or perhaps both. Facebook will be moving carefully to avoid igniting a privacy battle but it’s going to do something with location, probably soon, and it’s likely to redraw the landscape when it does.

It’s hard to know what this will mean. At the least, you’ll have a way to find out where some of your friends are at any given moment, and you’ll be able to get an extraordinary amount of information about what is near where you’re standing, right down to an opinion about the quality of the scones that day at the Starbucks where you’re waiting in line. Add some hyper-local advertising, the sort that is already being tried – look at the experiment by some San Francisco stores to send text messages to customers who get close to the physical location of  a store. There is an explosion of individual GPS apps – the Orange County Register just wrote up Wishing Stars, the iPhone GPS game you can play in Disneyland, not to be confused with Mobile Magic, the iPhone app that senses where you are in Disneyland and tells you the wait time at nearby rides. There are a thousand apps like that. Heck, knowing the way things go, there are probably twenty thousand apps like that, and it’s still early in the game.

I love my phone but it doesn’t do good GPS tricks. I’m starting to feel like I’m missing something important.