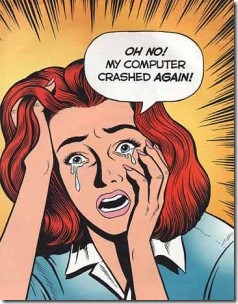 When you tell me about certain kinds of computer problems, I sometimes begin weeping uncontrollably, or excuse myself from the room for a few minutes while I gobble down powerful antidepressants. Let me give you another example to show you why.

A law firm wrestled with a new Dell Optiplex 760 for months, starting almost immediately after it was purchased – erratic lockups with no obvious cause and no pattern.

At some point the computer refused to restart, with a message on a black screen that there was no boot device to be found. It wasn’t consistent – the system could still be made to restart with enough frustrated smashes on the power button.

I contributed sage advice, ranging from “I’ll be damned,” to “Wow, how strange,” which was not as helpful as I hoped. The client sighed and picked up the phone for Dell tech support.

It actually wasn’t a bad experience with tech support. Sure, you wish magic tech support fairies would come flying out of the phone and instantly understand the problem and solve it, but those are hard to come by, so Dell’s support reps instead plod through their scripts, running through tests and eliminating the obvious. You know it’s plugged in but forgive the tech support rep who asks you to check – I’ve been on the other end of calls where people tell me, no, there’s no light on the surge protector, could that be the problem? Yes, that could be the problem.

Eventually the support rep conceded that the hard drive might be the cause of the problem, and a new hard drive appeared on the doorstep in short order. The client installed it and, I’ll be damned, the same problem happened almost immediately – no boot device, error initializing drive.

Second long session with tech support and an unfortunate result – the next tech support rep said the new hard drive must have been defective or jostled during shipment or something, so he sent out another one.

This time it wasn’t much of a surprise that the same thing happened again. Back to the phone, with more force and emotion and a teensy bit of anger. You have a sense of how much time is going by during all this jousting back and forth, right?

Dell finally sent out a technician with a replacement motherboard, like it should have done one phone call earlier. A new motherboard was dropped into place on Friday, the system was stitched up, and things appeared to be fine.

I stopped by the office today to install drivers and build the system up with updates and case management programs. I didn’t give it much thought when the system froze after a few minutes, but I was nonplussed to see the same black screen “no boot device” message when I tried to restart it. I spent fifteen minutes poking around in the BIOS to no avail, then yanked the computer back to my office in case this was all caused by the law firm building being built on an old Indian burial ground or something. No luck – the same error message, the same boot failure.

Lightbulb. Should have thought of it sooner.

I replaced the SATA cable between the motherboard and the hard drive.

The system started up and it’s been rock solid ever since. I’ve been working it to death and restarting it over and over and over, without a hiccup.

The cable. Stupid $9 cable hiding in plain sight, shorting out or whatever it’s doing wrong.

These are the stories that make me hesitant to dive into some kinds of computer problems. The next time it won’t be the cable, it will be a bit of flaky RAM, or a power supply that spikes, or cat fur blocking the fan, or a Milk Dud on the power switch, or an overheated video card, or it won’t be hardware at all. The same thing can happen with software problems, especially when malware gets on a computer – I can sometimes remove it with half an hour or an hour of work, but I’ve lost systems after spending three hours cleaning off bad things. Oddly, most people don’t want to pay me hundreds of dollars for doing really smart work when it happens to be completely useless.