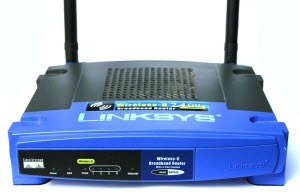 Wireless networks are convenient and likely to be the way most of us get our network and Internet connections in the future.

Wireless networks are a huge pain and nearly incomprehensible.

Both of those things are true.

Wireless technology has come a long way since the first consumer routers with wireless access points appeared on the market almost ten years ago. It wasn’t that long ago that it seemed like everyone had one of the ubiquitous blue Linksys routers like the one above. Now we expect wireless connections everywhere – our homes, our offices, hotels, restaurants, swimming pools, national parks, wherever we pull out our notebook computers – and we’re far less likely to have any idea what color the access point is that provides the connection. Dozens of companies have plans to deliver video over the Internet to our big-screen TVs (Netflix, Hulu, Apple, Amazon, all the TV manufacturers building network adapters into their TVs, all the companies making gadgets), and of course we don’t have a network cable running to the living room – sounds like a job for wireless, right?

There is some progress.

Everyone loves the idea of wireless. All too often, it takes serious rocket science to make it work.

This New York Times article does a nice job of going through many of the specific reasons that wireless technology for homes and small offices is so difficult.

When one of the first instructions a popular wireless Internet router from Netgear gives its owner is a choice between the security protocols known as WPA-PSK (TKIP) and WPA-PSK (TKIP) + WPA2-PSK (AES), you know the home networking industry has problems.

The technology industry would like us all to believe that vast numbers of Americans are happily streaming feature films, Twitter feeds, photos and home movies from the Internet to every TV in the house.

The reality is that setting up a home network to make all that happen is still a more daunting task than most home improvement projects. And it may be even harder getting one to work reliably when every family member is on his or her own computer or smartphone, simultaneously streaming, posting and surfing.

“The wireless category has never made itself inviting to the consumer,” said Simon Fleming-Wood, a senior director for marketing at Cisco, which owns the Linksys brand of home networking equipment. “When you shop for networking products, you feel like you’re in the plumbing aisle of a home improvement store.”

The simple truth is that, given a few days and publicly available programs, any wireless network can be broken. Sadly, as I just rediscovered today, most Wi-Fi networks don’t require that much trouble. Heck, it barely requires any effort at all.

The older WEP security for wireless connections has roughly the stopping power of hooking the latch on a screen door. It is the mildest of deterrents. The various flavors of WPA security are more difficult to break but no longer a barrier to a determined attacker. Call it the equivalent of throwing the deadbolt on the door.

I don’t want to overstate the security risks. When you leave your home or office, chances are that the deadbolt on the door is the extent of your security efforts, and you think it’s sufficient because it’s unlikely someone will work hard to break it. Similarly, your wireless network may never draw the attention of a determined hacker. Even if someone connects to your wireless network, your office files are still protected by passwords and file sharing restrictions that are separate from the security on the wireless network.

Still, it’s worth knowing that wireless networks are inherently risky. They have to be set up carefully. 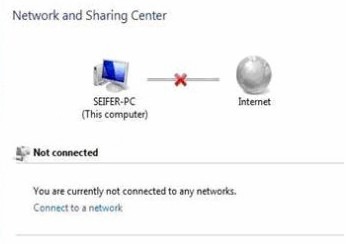 There are relatively few tips I can offer to laptop users trying to connect to a wireless network. It can be frustrating until you become a seasoned traveller who has fought the battle enough times to learn the tricks. Here are just a few general tips: