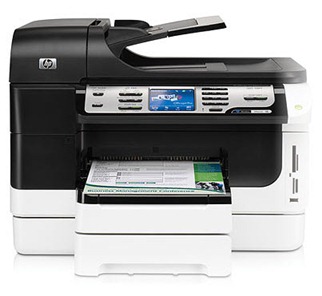 This week’s installment of Annoying Checkboxes comes to us courtesy of HP, always a reliable source of installation routines that take too long and bloat your system with too much crud. Now they’ve added a non-standard installation routine that seems designed to conceal the sneaky advertising and crapware that will be loaded onto your computer if you’re not careful.

I was setting up the HP OfficeJet 8500, a perfectly nice all-in-one for small offices. As always with HP, there are more choices of drivers than you expect – in this case, for Windows 7 64-bit, a “Basic Print and Scan Driver” and a “Full Feature Software and Driver.” Note that the “basic driver” is a 241Mb download, which strikes me as being excessive for a “basic driver,” by a factor of ten or so.

There is no information online about the “full feature software” that adds another 115Mb to the package. When I complained about HP’s bloated software last year, it was a response to useless things like the software to create an “HP Memories Disc” that turned up on way too many desktops over the years. This year HP is introducing printers that you can use by sending a message to the printer’s email address. You can send a photo from your phone to the printer while you’re at an event, and the printout will be waiting for you when you get home. Seriously, that’s the pitch.

It turns out that most of the uses for the “web-connected” printing will cause the printer to spontaneously print advertisements, which seems to be the point of it in the first place.

But I digress. That’s not included on the OfficeJet. I bring it up only because it illustrates why I don’t trust HP’s judgment about software. I don’t know what’s in the “full feature” suite for the OfficeJet – I wouldn’t touch it with a ten-foot pole.

When you start the install routine for the OfficeJet 8500, this screen comes up relatively quickly. Look at the full-size screen shot! If you were setting up the printer, you’d glance, check the box, and click Next. I did it myself a few times before I caught on. 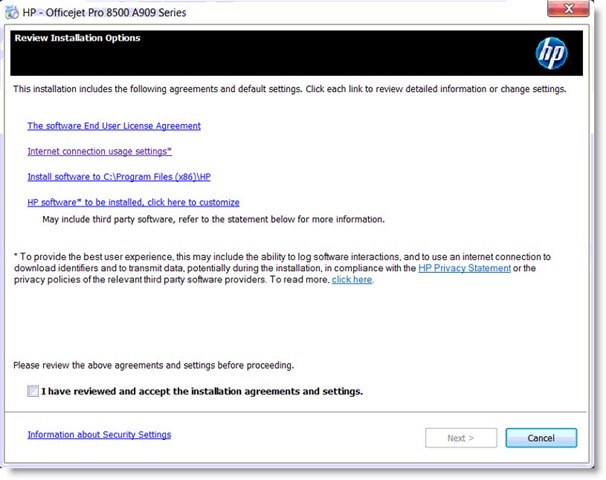 It doesn’t look like any other installation window, does it? Take a look at that second link – “Internet connection usage settings.” It has an asterisk, and the footnote is right there, with a bunch of gobbledegook about HP’s privacy policy and the “best user experience.”

It’s all designed to keep you from clicking the link. Here’s the screen that comes up if you click. 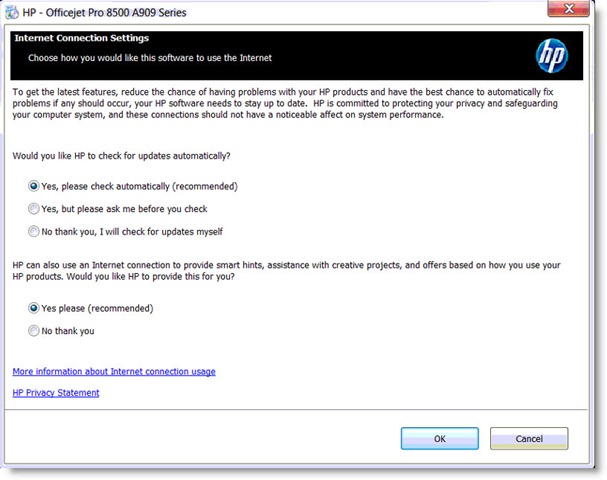 The top choice is pretty standard. HP will install a utility to check for updates every fifteen or twenty seconds, presumably with a little blinking icon that will sit down in the lower right corner when there’s an update, blinking and popping up balloons and yapping like a Jack Russell terrier until you want to scream. Normal stuff – hateful, but normal.

But read that second sentence.

HP can also use an Internet connection to provide smart hints, assistance with creative projects, and offers based on how you use your HP products. Would you like HP to provide this for you?

By default, HP invites itself into your computer to pop up “offers”! From the disclosures about “third party partners” and the rest, it seems pretty clear that HP is installing adware on your computer, with only a buried “disclosure”. If you supply your email address later, when HP begs you to register, I assume this constitutes your agreement to be assaulted with spam. Since HP doesn’t know your email address at this point, the only way to read this is that “offers” will be presented onscreen while you work, popping up from various corners of the screen.

These are the good guys. It’s hard to remember that when they act so much like the bad guys.

Go back to that first screen. The fourth link is: “HP software to be installed. Click here to customize.”

I completely missed that the first few times I ran into this HP screen. Here’s what happens when you click in. 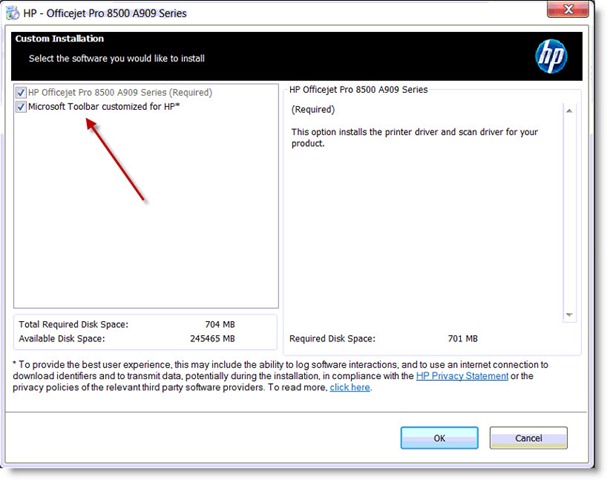 There’s our old friend the “Microsoft toolbar, customized for HP”!

Seriously? An Internet Explorer toolbar? Hidden in a printer driver?

I’ve run into other screens here with much longer lists of software that gets installed if HP is given free rein.

If you’ve ever wondered how unwanted software gets onto your system; if you’ve ever been annoyed by desktop icons that appear out of nowhere; if you can only see half the window in Internet Explorer because toolbars are covering everything – look no further. It’s because of sleazy deals like this.

Be careful when you install programs. Always do a “Custom” install, always look at the choices. These guys don’t necessarily have your best interests at heart.