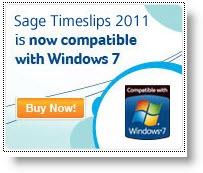 Sage Software has learned the revenue-generating lesson taught by Intuit (Quickbooks), Lexis/Nexis (Time Matters), and many others: there’s money to be made in forcing people to buy upgrades, whether they need them or not. One way to do that is to abandon products after two years. Customers will feel pressured if they know that a vendor will refuse to provide support for a business-critical program because they are using a version that is too old to deserve respect.

Offices using Timeslips 2008 have probably been getting an onslaught of email messages warning them that support for Timeslips 2008 ends this month. If your database is corrupted in November, don’t go turning to Sage for support! Not their problem. Should have upgraded. I picture them sniffing down their nose in distaste that you would bring them a problem with a version of their product that’s two years old. Sniff!

That’s not the surprise.

The surprise is in the system requirements for Timeslips 2011, the new version that you’re compelled to buy.

If you have a Windows 7 computer, Timeslips 2011 is only supported on Windows 7 Professional, not Windows 7 Home Premium.

Let’s do a quick review. With Windows 7, Microsoft finally straightened out its lineup of Windows products and made the versions coherent and consistent. Each version of Windows 7 rests on a core that is absolutely identical in all versions. Each higher version adds specific features while dropping nothing. Vista had features in Home that were not in Business and vice versa, but Windows 7 is completely linear.

There are a few other things in Windows 7 Professional – (Windows XP mode for legacy business-critical applications, backups across a network) – but nothing that changes the architecture of the system and nothing that affects how programs run.

Very small businesses without a server buy computers with Windows 7 Home Premium. There has been no reason to spend the extra money for the higher version and Home Premium is the version on all the computers in the stores.

I can’t find any explanation of why Sage requires Windows 7 Professional. Perhaps there’s something I’m missing, because from here it looks like a requirement manufactured out of thin air that can be used as an excuse not to provide support. These vendors don’t like to provide support, you know. They’ll sell the support contracts readily but it annoys them no end if you use them – providing support is expensive.

There is good news. It’s easy to upgrade to Windows 7 Professional. If you’re caught in this trap, click on the Start button, type in “Upgrade,” and click on Windows Anytime Upgrade. You’ll be led through a short, smooth process and for $89.95, you’ll have the upgraded version of Windows 7 with very little delay. All the code is already on your hard drive and nothing important is changed – all that happens is that a few extra features are turned on and a handful of new menus appear if you poke around.

So that’s the surprise. Upgrading to Timeslips 2011 might cost an extra $89 and some fuss, in addition to the cost of the unnecessary Timeslips licenses to a new version that you’re not sure you want, and the annoying support contract, and the risk that the upgrade will wreak havoc with your data or cause your workstations to stop working. Which comes to mind because the first client to run into this had to deal with program crashes when the Borland Database Engine started throwing up error messages on two workstations after the upgrade.