Some of Microsoft’s best technology has been overlooked for three years, hobbled by a poorly chosen name and a market that wasn’t ready for it. Microsoft is about to take that technology and put it front and center. I think it should be smashingly successful in its new incarnation.

Windows Home Server started life as a heavily customized version of Microsoft’s long-standing platform, Windows Server 2003. WHS then added some unique features that set it apart – the features that make the new products so exciting that will be arriving from Microsoft next spring.

Let’s start with the basics.

When WHS was released in November 2007, the idea was to supply a small box stuffed with hard drives that would hold your home media files, all your photos and movies and music. In Microsoft’s original vision, the main function of the box would be to occupy a space in the closet at home feeding media to all the computers in the house as well as devices connected to the TV in the living room.

The box has no monitor, no keyboard, no mouse. Everything is controlled from another computer, using lightweight software and a sleek console. HP and other manufacturers put some effort into providing additional customized software, and third parties developed a thriving market for addins.

Three things happened to slow down this promising product. 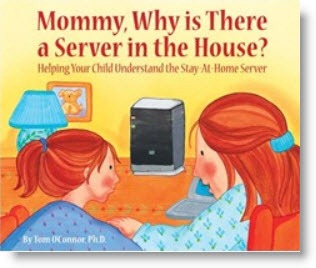 One: it’s not until the last year or so that many people have become dependent on their home network and want access to everything, everywhere. It seems natural now to want to look at your photos on multiple computers in the house, plus on your iPad and maybe on the new TV in the living room, but that hasn’t been on your mind for very long. Only three years ago Microsoft and vendors felt the need to educate customers with primers about what such a server could do. You don’t need the primers any more. You get it.

Two: a rare but hugely embarrassing bug turned up that could cause data to be corrupted – a simply unforgiveable flaw in a server. It took eight painfully long months before a service pack was released that fixed the problem. Much damage was done to the product’s reputation.

Three: the name “Windows Home Server” essentially prevented businesses from considering it, despite features that should have made small businesses start adopting it right away. Microsoft realized late that it had made a strategic miscalculation about how to position its product and made a halfhearted effort to pitch it to businesses. The business products coming next spring will put this issue to rest.

Okay, you’ve got the picture of a little box that holds files and sends video flying around the house. (It does some nifty tricks for remote access too, although those have proven to be finicky.) What is the whizbang technology that makes Windows Home Server so special?

If the physical box has a single 1Tb drive, you see 1Tb of storage space.

If you open the box and slide in another 1Tb drive, you see the pie grow to 3Tb before your eyes. It’s still just a single big space that you’ve made bigger on the fly.

It’s not RAID, with an expensive, complex controller. It’s not done with command line tools and trepidation. It just happens. If you want more space, you add a hard drive and bang! more space appears.

If you have any history with basic disks and dynamic disks and partitions and volumes, you may appreciate how magical this is. If not, trust me. It’s magic.

Check a box in the console and files stored in designated shared folders are stored redundantly. If any drive fails, your shared files are completely undisturbed. They don’t take twice as much space and it’s not as simple as two copies stored somewhere, but it’s also not as arcane as RAID volumes. It just happens . . . and it works.

That’s an improvement in hard drive technology that has not yet been fully appreciated. It’s simple and profound and natural – you’ll think everything must have always worked that way.

A Windows Home Server device on your network does a nightly backup of every workstation on the network. The entire computer is backed up.

If a hard drive fails in the computer at your desk, you can put in a replacement hard drive and run a special routine from the WHS CD. It will find the WHS device, locate the correct backups, and restore the computer to its condition when the backup was done the night before. The process takes about 45 minutes.

Look, I can see that you don’t appreciate that. You’re not focusing. Read that again. Or go read the longer writeup I did about that last year. Or imagine that I’m standing in front of you, talking louder and looking animated and practically grabbing your arm and shaking it to make you understand that THIS IS INCREDIBLY IMPORTANT! This little box will automatically do backups that give you complete disaster recovery for 10 workstations for five hundred bucks. Backups are kept for months so you can recover deleted files or roll back to the computer’s condition before a malware attack. No reinstalling Windows, no need to dig out old license codes, no hours of installing updates before the computer is safe. Just a few minutes to boot from the WHS CD and 45 minutes watching a thermometer tick towards the end, and the computer is restored.

Ooh. I’m tingling. Words can’t describe how good this is.

If your business has Windows XP workstations, you should be backing them up to a Windows Home Server device, even if you don’t use it for anything else at all. Nothing else will handle backups of multiple Windows XP computers as well. Nothing else even comes close.

Windows 7 and Vista can do similar image-based backups from the built-in backup program, which is fine for a single computer with an external hard drive. In a business with five or ten workstations, the economics tilt strongly toward a WHS box for backups. You think you don’t need it? Your server is backed up, your mail is online? That’s swell, but look around the office. Without workstation backups, you don’t have a backup of the owner’s well-groomed Internet favorites, or the .NK2 file that the partner treats as an address book, or the files that the bookkeeper insists on saving on her desktop despite warnings, or the .PST archives that the busy associate creates on his laptop. You don’t have the desktop icons arranged just so by the partner in the corner office that hates computers.

Backup images are good. Think about it.

There have been some shortcomings of Windows Home Server devices.

Several of the products for small businesses represent the next generation of Windows Home Server, polished to a high sheen. I’ll tell you about those next week.

Next: an introduction to the next version of Small Business Server