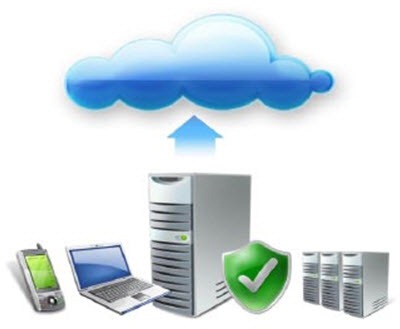 I have a long article for you about an exciting new platform for small businesses scheduled for release in six months. Take your time and read this over the holiday weekend, but don’t get lazy and decide you can skip this one – there will be a test when class meets again. Happy Thanksgiving!

Small Business Server 2011 Essentials will be marketed as a “first server” for small businesses with fewer than 25 users.

The idea is to blend an onsite server and cloud services. In broad overview:

The onsite server is run using the simplified consoles and controls originally designed for Windows Home Server, spiffed up for business use. There is very little resemblance between the simple control panels in SBS 2011 Essentials and the more complex collection of management tools in SBS 2011 Standard.

Here’s a quick overview of some of the specific features.

If you read my description of Windows Home Server, you’ll recall that it has two technical achievements that set it apart.

It does the cool backups of workstations every night, which will be carried forward in SBS 2011 Essentials.

It also features an innovative system to handle drive storage space named Drive Extender. Hard drives can be added freely and the storage space increases and decreases elastically; plus, files can be marked to be duplicated across the drives so they will survive even if a single disk fails. It’s like RAID but without the expense and fuss.

Today Microsoft announced that it is killing Drive Extender technology permanently in all its upcoming products, including SBS 2011 Essentials and the new version of Windows Home Server.

This was completely unexpected and has the Windows Home Server community in a tizzy. The stated reasons are unconvincing – “not meeting our customers’ needs,” and after all “large hard drives are reasonably priced.”

In other words, this might be swell technology but it’s not completely standard; when you enter the business world, there are important advantages to having something that is completely standard and built on a foundation that does not wobble. Vendors already use Drive Extender as an excuse not to support programs installed on the current version of Windows Home Server. Intuit will support your Quickbooks installation on SBS 2011 Essentials now that it’s simply Server 2008 under the hood, no ambiguity, no argument. 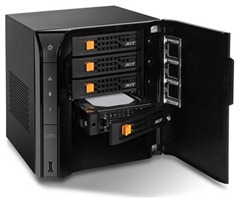 Oddly, though, this single decision may increase the cost of the hardware running SBS 2011 Essentials. The hardware vendors hadn’t shown anything yet but I wondered if it would be possible to run SBS 2011 Essentials on a little box about ten inches high, like the ones currently sold with Windows Home Server. Those boxes are designed singlemindedly to make it easy to put hard drives in and out.

Without Drive Extender, we’re not going to need that easy access to drives. I’ll bet that SBS 2011 Essentials is sold in a traditional server case with room for a RAID controller and a full-size motherboard, and a higher price tag to match.

Worth noting: this is neutral or perhaps even a good thing for the business server but it seriously reduces the appeal of Windows Home Server. I’ll write about that later.

There won’t be any official migration path for businesses already set up with an earlier version of Small Business Server, but that’s not a big barrier for a very small business; it’s not hard to set up the SBS 2011 box from scratch and manually move 5 or 10 people to new profiles on their workstations.

Although each business has different needs, many very small businesses running SBS 2003 will decide to move forward to SBS 2011 Essentials and hosted Exchange mailboxes. It will be done manually instead of using a migration wizard but the result is the same, if it’s done right. (And maybe the result is better than a migration if the old SBS 2003 box has begun to drift out of control.)

SBS 2011 Essentials probably won’t be released until late spring/early summer 2011, so pricing may still move around a bit. The announcement said a license will be $545, about half the cost of SBS 2011 Standard, but SBS 2011 Essentials will not require Client Access Licenses, making the cost significantly less as a business grows.

The limit of 25 users for SBS 2011 Essentials will be enforced. If you outgrow it, you’ll be in for a big project to get new hardware, new server licenses, and do a real migration.

The glue that holds SBS 2011 Essentials together is an upgraded version of the hosted services run by Microsoft, currently marketed as Microsoft Online Services, AKA Business Productivity Online Standard Suite, AKA Exchange Online/Sharepoint Online.

Microsoft has begun testing the upgraded service, which will be branded more simply as Office 365. Until now I’ve focused on Microsoft’s hosted Exchange mailboxes and mostly ignored the other hosted services. Office 365 will be a more tightly integrated package, and the design will assume that users are familiar with all of its pieces, not just the Exchange mailbox. Cross your fingers, knock on wood. If it’s well designed, we’ll get rich new tools that will change our businesses.

If it’s an overwhelming mishmash of too many services with too many odd names, we’ll close our doors early and go lie down with a damp cloth on our forehead.

More about Office 365 later, after I’ve had a chance to look at it.

I’m excited. SBS 2011 Essentials looks like solid technology for small offices. It will be exactly right for my clients who are still running their old SBS 2003 boxes even after moving Exchange to the cloud. Let’s hope Microsoft can deliver on the promise!