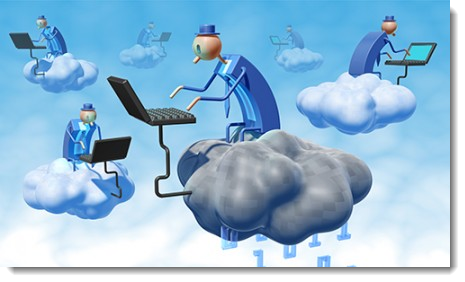 Feeling confident about your ability to keep up with the pace of change? You ain’t seen nothing yet.

Small businesses will soon have the option to have all of their computing power hosted offsite. No servers in the closet; no workstations under the desks. Onsite you’ll have a monitor, a keyboard and mouse, and a fast Internet connection. Everything else will be in the sky. And yet when you sit down, you’ll log in and see a Windows 7 desktop and click on the Word icon and browse through your files and start Outlook and read your mail.

Sounds odd, doesn’t it? I’m predicting that it will be widespread and readily available within three years. The infrastructure is being built right now to make that happen. Let me try to describe why this came to mind when I read a couple of recent announcements.

You might not be familiar with Remote Desktop but it’s been included with every version of Windows for more than ten years. Ever since Windows XP, it’s been possible to connect to another computer and bring up a faithful representation of the desktop on that computer, running in a window on your own computer or running fullscreen with a toolbar sliding down from the top of the window to minimize or end the session. Over the years the names have changed (“Terminal Services” on a Windows server is now “Remote Desktop Services”) and the experience of using it has improved, with faster performance and better support for remote printing and USB devices.  Networks running Small Business Server have a brilliantly designed front end for using Remote Desktop from offsite locations but it’s otherwise been relatively unfriendly for homes or small businesses to set up, which is why you may not have run into it,

Microsoft’s Remote Desktop Protocol is one of many platforms that have enabled more or less successful remote computing over the years. Programs like LogMeIn, GoToMyPC, RealVNC, TeamViewer, PCAnywhere, Apple Remote Desktop, Timbuktu, and many more have either leveraged Microsoft’s RDP or built their own independent protocols to connect to remote computers.

Microsoft just released Service Pack 1 for Windows 7 and Windows Server 2008 R2. (We’ll be talking more about that later.) Service Pack 1 for Windows 7 and Windows Server 2008 R2 has new Remote Desktop technology, with servers using “RemoteFX” to deliver rich graphics over a remote connection – full motion video, visual effects, and 3D from a remote computer. The experience of controlling a remote computer using Remote Desktop will be indistinguishable from controlling your local computer. It’s a step ahead of the experience delivered by any other remote desktop protocol at the moment.

At the moment, you still need a local computer to run the Remote Desktop software in order to connect with a remote computer. Think about that for a second: if you have a computer under your desk running Windows 7, it’s not very exciting to connect to a remote computer running Windows 7. It’s great for providing IT support but doesn’t create other big opportunities for businesses.

The truly significant announcement from Microsoft is Windows Thin PC, a specialized bit of software which does only one thing: it starts up some piece of hardware, then starts a Remote Desktop session. It doesn’t do anything else – doesn’t create its own desktop or handle programs. It’s going to start out as a way for companies to “repurpose” their existing PCs, basically giving big companies the ability to control user desktops much more tightly, since the only desktop seen by the user will be a virtual desktop controlled by the company servers.

It won’t take long, though, before Microsoft will make this technology available to use in new, small devices – and if Microsoft doesn’t do it, someone else will. It doesn’t take much computing power to run a Remote Desktop session, and it doesn’t take much space to host a lot of computing power! Take a look at one product that’s already on the market, the Jack PC Thin Client. The entire “computer” fits into the wall in the space currently taken up by an electrical outlet or network jack. The face plate has connectors for one or two monitors, USB ports (for keyboard and mouse, plus USB devices), and speakers. It uses almost no power. It’s smart enough to start a remote desktop session supporting a number of different protocols. When you sit down at your desk, you see: a Start button and a desktop and icons and your files. That’s the point. When a device like this supports the new Microsoft RemoteFX technology, your experience will be identical to the experience of having a local computer.

In order to take advantage of this, you need a remote computer that will send you a desktop. The culmination of this for small businesses will be the development of services that offer hosted Windows 7 computers for a monthly fee. The services will have the same appeal as hosted mail services or hosted document management systems. The burden of doing system maintenance and installing updates and doing backups and ensuring continuity will fall to a big company with giant server farms. With luck, they will do responsible work and keep our data secure. Obviously there will be lots of threshold questions before we are confident enough to make this leap, but I think we will make the leap, and perhaps sooner than you might think. The technology is nearly complete. It won’t take long for companies to develop packages that will sharply reduce the startup and maintenance costs for technology for a new business, and give existing businesses some very interesting choices when it’s time to replace servers or workstations.

Want to see what it will look like? It turns out there is at least one company testing the water right now. Worldox is one of the leading document management packages for small and medium size law firms. Its primary product is a database-driven document management program that runs on an onsite server.

Last fall it introduced “Worldox CompleteCloud.” For a monthly fee, Worldox provides hosted, remote Windows 7 desktops. Presumably Worldox provides some customized software for the connection but under the hood is the same Remote Desktop technology. The service includes access to a Windows Server 2008 server for file storage, Exchange Server for hosted mailboxes, copies of Microsoft Office for each user, plus the Worldox document management system and assistance installing any other business software necessary to make this work for any particular business. Worldox takes over all the patch management, backups, updates, and maintenance.

Consider it a preview of coming attractions. Worldox is packaging a customized version of services from Corebanc, which has developed a business of providing hosted desktops through partners. More companies will package up Corebanc services and present them as their own, and many more companies like Corebanc will spring up in the next couple of years.

It’s all close. Many of the final technical barriers are being worked out, leaving the question of whether this can be turned into a good business model. Companies have to develop the business, the numbers have to make sense, we will have to be assured about security and reliability – there is still a journey here. But I can tell you why you care.

It’s because one of the advantages will be immediately obvious to many businesspeople: it will be possible to use exactly the same desktop from multiple locations. Whether it’s a desktop computer at the office, a notebook on the road, a tablet at home, a thin client in the wall – the same desktop, the same icons, the same documents, the same programs, no matter how you approach it. Many people have come to depend on that ubiquitous access to their mailbox with hosted Exchange accounts; this is the same concept on steroids. It’s possible to accomplish something like that with LogMeIn running on an office computer for one person to use, but this takes an entire office to a whole new level. If it’s done right, you’ll start to wonder about it for your business.