Battle Of The Browser Updates 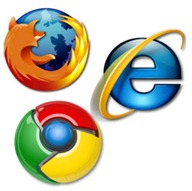 It’s probably a coincidence that major updates are being released for Internet Explorer, Firefox, and Google Chrome within a few days of each other.

It’s also not very meaningful for most people. Although each upgrade has something that the developers claim is new and shiny – increased security, speed, design changes – I haven’t seen anything in any of them that gets me excited. It’s all a bit of a yawn.

What’s funny is the development cycle and what it tells you about the culture at each company.

Mozilla has been moving so slowly that it’s embarrassing. Firefox 4 has been in beta for way too long, with lengthy delays and twelve beta releases of Firefox 4 – and it’s still not released! The announcement this week was about the “release candidate,” meaning Firefox 4 is really, really close unless the Mozilla team decides to delay yet again. Bear in mind that this is Mozilla’s only product. It’s not like they’re busy with other things.

Lots of new features, lots of add-ins, but nothing about the new version has caught my interest yet. Personally, I gave up on Firefox when they introduced “Personas,” the feature that lets you add a background image at the top to make Firefox look like a bad MySpace page.

Microsoft will release Internet Explorer 9 on Monday, after a confusing sequence of “platform previews” for developers, a beta last fall, and a release candidate a few weeks ago. IE9 has an uncluttered appearance, so much so that it will leave many of you disgruntled. Things are moved around again, fairly arbitrarily – the home and favorites buttons are on the right in IE9, for some reason, which still doesn’t feel natural to me after using it full time for several weeks.

More importantly, though, IE9 is as fast as the competitors, provides a high degree of security, and observes web standards (web standards are part of a strange world full of endless debate, so assume that many people have lots of opinions about that). Best of all, unlike IE8, it installs reasonably quietly and doesn’t force you through a series of arcane questions after installation about “web accelerators” and “suggested sites” and “web slices” – surely some of the least-used features on any Windows computer.

My guess is that you will install it, be slightly disoriented for a few minutes, and then completely ignore it while you get back to what you were doing online.

Meanwhile, Google has delivered updates to Google Chrome so quickly that it’s kind of silly. A year ago, Google was only on version 4. Chrome version 9 was released on February 3, and version 10 was released yesterday, just over a month later. Are you excited about the speedy updates? You bet! Why, with version 10, look at the new features!

It comes with 23 security fixes and is the first final browser version that integrates GPU acceleration. There is also sandboxed Flash, tabbed settings, out-of-date plug-in reporting, background web apps as well as the Crankshaft JavaScript compiler.

Wow! There’s some stuff that will turn your head!

Chrome is an interesting piece of work, stripped down almost to the point of absurdity, like so many Google products, but capable of doing a fair number of interesting tricks. I haven’t had any reason to push it on you yet, but I won’t rule it out as I keep exploring it.

The browsers increasingly look like operating systems. You won’t rush out and install one of these out of excitement for new features. Instead, you’ll install them because they’re the engine under the hood that helps you accomplish something – playing the next generation of streaming videos without skipping, or getting the most from increasingly sophisticated web services that are already taking the place of programs on your computer. If you’re interested, by all means download and install the updated browsers! But don’t be surprised if the excitement wears off quickly.