Almost a year ago I wrote an article about how Microsoft could change the world by moving our files online. Imagine that you could have your office documents appear seamlessly on your office computer, your notebook, your smartphone, and in a web browser on any computer. You could work on them in any of those places, with new and changed files quickly being synced to all the other locations. On your own computers you’d always be accessing files stored locally with Office, using all the rich tools in the Office programs running at full speed. When you’re away from your own computer, you’d still have full access to those files and be able to work on them using Office Web Apps. You could share and collaborate with no technical stumbling blocks – no uploading in a browser, no multiple copies of files.

I wrote that last summer about my bitter disappointment that Microsoft had blown an important chance to deliver on that grand vision. Since then, Microsoft has done nothing. Google Cloud Connect does not get us to that goal either, but at least it moves the ball forward.

Let me address a couple of issues that take a bit of the luster away from Google Cloud Connect, then talk about how it overlaps with Dropbox.

Google Docs is a service for storing files online so they are accessible from any computer. A year ago, Google expanded Google Docs so it could be used to store many kinds of files – Office files, PDFs, JPGs, and more.

To go along with the file storage, Google developed browser-based programs for word processing, spreadsheets, and presentations. The programs are adequate but minimal, with barely enough tools to do basic tasks. They understand only the most superficial things about Office files. Theoretically, you can open a .DOC or .XLS file in Google Docs, but you will lose most of your formatting, never to be seen again.

So let’s follow a file on its journey from your computer.

When a file is saved in Word with Google Cloud Connect, the .DOC file is copied unchanged to Google Docs.

When you click on a URL in the Google Cloud Connect toolbar to see a document in Google Docs, a file viewer opens and displays an accurate representation of the Word document or Excel spreadsheet.

The first difficult bit is right in front of you. If you click the tempting “Edit” button, you will create a copy of the original file. The copy will open in the Google Docs editor – and you will lose much of the formatting of the original file. You will not be using an editor that will save changes and sync them back to your desktop. 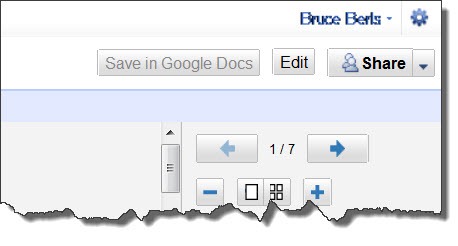 The result is that you have to maneuver your mouse around “Edit Online” and hit “Download Original.” In newer versions of Internet Explorer and in all other browsers, you won’t be able to open the files directly into your Office program. They’ll be saved in the Downloads folder, which you’ll have to track down to open the file. (Even worse – if you’re sharing a file with someone by sending the URL, you’ll have to make sure that person understands this too.) 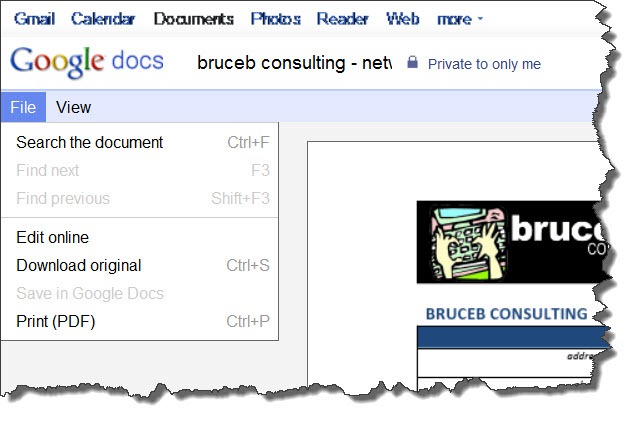 Microsoft quickly issued responses to Google Cloud Connect – a blog article about possible problems, and a video that walks through some of the error messages and shortcomings.

Some of the objections are overstated but one point is made clearly and correctly: simultaneous editing of files is hard to manage! The sharing and review tools in Word and Excel are overly complex but some of that is unavoidable. Google presents collaboration and simultaneous editing as if it is easy but there are many ways for it to go sideways. You will be impressed if you use Google Cloud Connect and collaborate carefully to accomplish modest tasks. You will be frustrated if you and a collaborator work on the same section of a document and wind up with copies of a document that are hopelessly out of sync no matter how many times you push the Sync button – or any of a number of other scenarios that cause the process to go badly.

The Microsoft video highlights some of the messages that might come up in the course of doing things both simple and complex with Office files and Google Cloud Connect. I’ve seen a couple of them myself. It’s not quite the seamless, error-free experience that you’re hoping for. 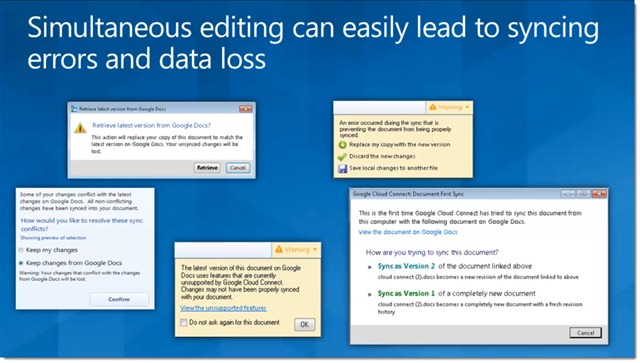 This would be so much easier if we had one service that would do it all! Sigh.

Dropbox is one of my favorite services. If you work on more than one computer, you should be using it – go read about it here. When you install Dropbox, you have a magic folder on your office computer and your home computer or your laptop. Anything you drop in the folder at one end automatically appears at the other end almost instantly. Edit an office document on your laptop on the road and the edited version is waiting for you at the office. Behind the scenes, the program is copying your files in the magic folder to online storage, then syncing them with the other computers, automatically and continuously.

Among other things, Dropbox keeps previous versions of files and makes it easy to share files and folders. It works quietly so sharing isn’t quite as obvious as Google Cloud Connect, but it’s quite easy after you do it the first time.

If you already use Dropbox and store your active files in the Dropbox folder, Google Cloud Connect is mostly duplicative.

The advantages of Google Cloud Connect:

The advantages of Dropbox:

Microsoft has rudimentary online versions of Word, Excel, and Powerpoint. It has developed programs to sync files online like Dropbox. It offers online file storage in its Skydrive service. There are tools built into Office 2010 for simultaneous editing of files.

This ought to be a Microsoft solution.

This summer, Microsoft will upgrade the whole structure for storing and editing files online, with most of its effort built around the new Office 365 service due in a few months. (We’ll be talking much more about that soon.) It may be swell, but I have lost confidence in Microsoft’s ability to keep up with the demands of a mobile world. It seems just as likely that it will deliver something clunky and unintuitive, or overly complex. There is also a lingering fear that Microsoft simply cannot bring itself to deliver effective online web apps because it might cannibalize its lucrative Office sales.

Midsize and large enterprises use Microsoft’s Sharepoint platform, which sets up elaborate portals for teams to manage documents, collaborate, engage in discussions, and more. Sharepoint is daunting for a small business, requiring a steep learning curve and far more IT handholding than small businesses are comfortable with. If Office 365 is nothing more than a cheap but complex Sharepoint site, it will arrive stillborn.

Microsoft can still surprise us. Windows 7, Office 2010, Security Essentials – all fine pieces of work that deserve much praise. But look in a different direction and you see Windows Phone 7, which stinks of death. Or look over there at the tablets that will sweep the world this year. Microsoft is so far out of that game that Steve Jobs didn’t even bother to make fun of Microsoft during his introduction of iPad 2. In a way, not mentioning Microsoft was the unkindest cut of all. 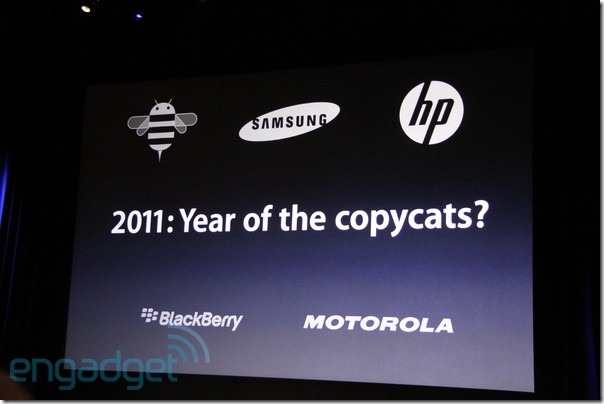 Google Cloud Connect is a fascinating and useful tool. Many of you may want to use it. It’s not perfect. Microsoft – and perhaps only Microsoft – could deliver the perfect tools. In the last few years it hasn’t given us any indication that it knows how to do that.