Samsung Series 9 And The Power Of Elegance 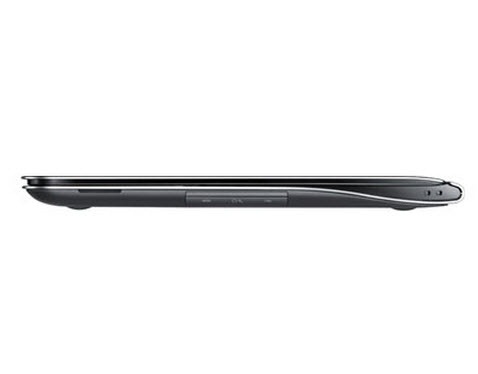 The Samsung Series 9 combines elegant design, advanced engineering, and uncompromising peformance in a stylish ultralight, ultraslim premium laptop. It stands alone at the top of the Windows laptop market. Samsung might not be the first name you think of in notebook manufacturers but the company poured money into developing the Series 9 in the hope that it would draw attention to the entire Samsung notebook line.

That thin sliver in the picture above is less than two-thirds of an inch thick and weighs just over two and a half pounds. Inside is an ultra-bright 13.3 inch display, a full-size backlit keyboard, and a more responsive computing experience than any other computer I own, thanks to the latest Intel Core i5 “Sandy Bridge” processor technology and a blindingly fast solid state hard drive.

You have to see it in person to appreciate the design. It is a wisp that suggests a manila folder or a pad of paper, with a hint of gentle curves. No exposed ports, sleek and minimalist from every angle. 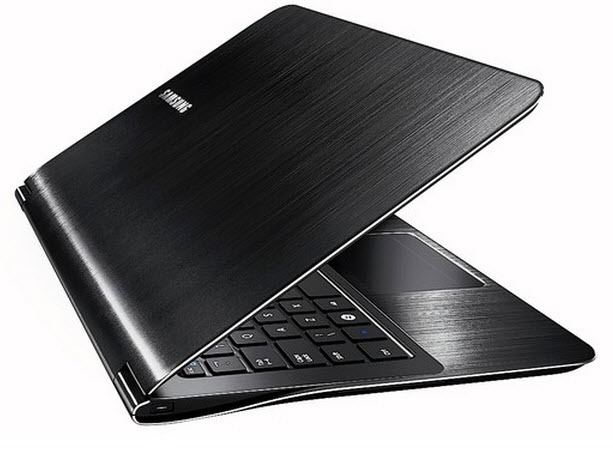 All of the specs are impressive, latest and greatest stuff – 802.11n wireless, USB 3.0 port, long-lasting battery, wrapped in a metal case that feels stronger than you’d expect from the light weight. More important, though, is the responsiveness when you use it. Samsung tweaks the power-saving features to put the laptop into hibernation when the laptop is closed and wake it up particularly quickly when the cover is opened – no push needed on the power button.

When I open the cover, I get a usable desktop in three seconds. Yet it’s coming out of hibernation, not drawing any power at all while the cover is closed. My perception is that the battery lasts all day because there’s no disincentive to closing the cover when I’m looking away.

You can get the detailed specs from Samsung’s web site, or from the particularly lengthy description on Amazon, or in Walt Mossberg’s column or in detailed reviews like this one. You won’t buy it for the specs, though. You’ll buy it because there’s nothing else like it on the market. It will convey that you are serious and successful, interested in having something that draws attention without being flashy. 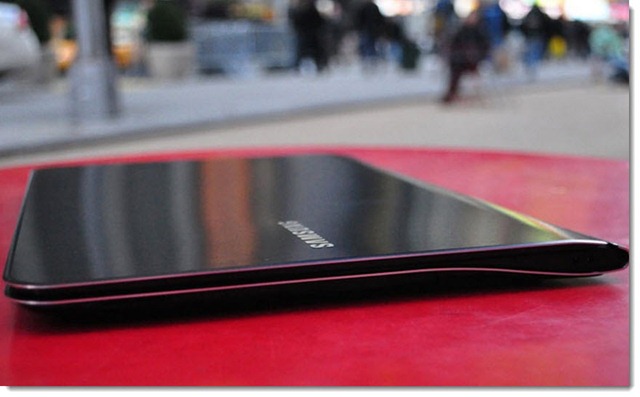 It’s expensive – oh, goodness, yes, it’s expensive. Most retailers don’t have it in stock yet so prices are jumping around. Some retailers are jacking the price up when they get a few in, just because they can. (*cough Beach Camera cough*). Expect it to be around $1,600, and that’s before you pick up a copy of Microsoft Office 2010, which isn’t included.

It may be obvious that I’m a fan of ultraslim notebooks. It seems like a no-brainer to shed extra pounds by giving up a couple of inches on the screen and a DVD drive that you no longer need. It’s already possible to get lightweight Dell Vostro V130 laptops for far less than the Samsung Series 9, and you can expect announcements from Dell, Lenovo, and Sony in the next few months.

Samsung’s obvious goal was to make a premium notebook that could match the aesthetic appeal of the MacBook Air, Apple’s ultra-slim notebook that has been turning heads since it was introduced in 2008 and redesigned last October. In many respects, the Series 9 and the MacBook Air are nearly identical – the photo below should be enough evidence of that. 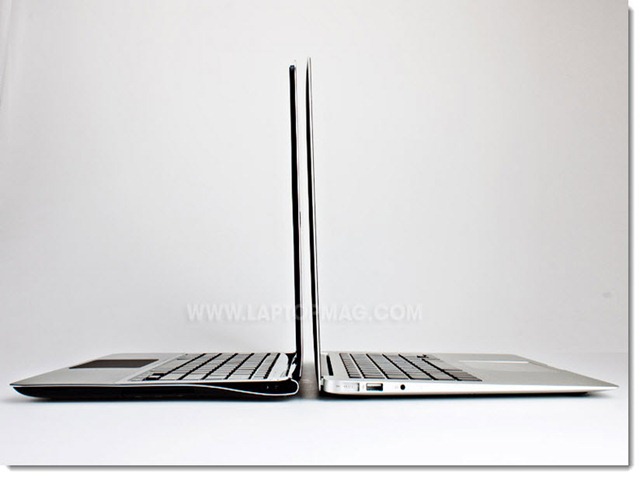 The two laptops are also very similar in many features, and in price – in fact, the Series 9 is slightly more expensive. (The Samsung notebook also has a later generation of processor and a far brighter screen, which helps account for the price difference.) Here’s a particularly detailed comparison of the two notebooks which scores different features like a boxing match – the Samsung body has better curves! The MacBook Air has slightly better speakers!

That misses the point a bit. Almost everyone has some compelling reason to choose a Mac or a PC and can’t easily cross over. Until the Series 9, Windows users did not have a good choice for an ultraslim premium laptop. Now Windows 7 users and OS X users alike can get whichever one suits their needs and their experience and their workplace.

We might be near the end of the time when a superbly engineered laptop can still turn heads. Every college student and every business person and every person in line at the airport in front of you has a laptop – after a while, the details just don’t matter.

We’re not quite at that point yet. The Samsung Series 9 will still earn you some bragging rights when you pull it out at a meeting. Take a look when I’m next in your office!