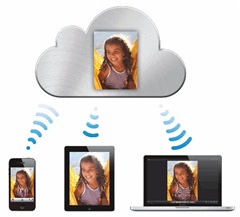 The new service announced by Apple for syncing photos among different devices is one of the most interesting parts of the iCloud package, both for what it does and for what it leaves out.

The idea is simple: each photo you take with your iPhone or iPad will automatically be sent online and then synced with your other Apple devices and your computers running iTunes.

That’s a brilliant (and obvious) solution to the photo problem: once you take a picture, how do you get it to the device where you want to display it? It’s not difficult but it’s not automatic, either. Most people learn one of the options and ignore the rest. You can tether the camera or iPhone to a computer; remove the CF or SD card and transfer the images from it; upload the pictures from the phone to Flickr or Facebook or Dropbox or any of the other online services; or any of a hundred other ways that require a modest learning curve and some additional follow-up step after the shutter is snapped.

Once the iCloud service is running, Apple will simply make your photos appear on the different devices, with no further action required. The idea of taking photos on an iPhone and being able to see them soon on an iPad or computer with no fuss ought to make a lot of people very happy. Microsoft and Google have the technology to do this but Apple is once again proving that it is the only company with an ounce of vision about how to make services attractive and useful. (There are reports that Microsoft’s Windows phones will do something similar with photos and videos when they are updated at the end of the year. Microsoft will again – and deservedly – be perceived as a follower instead of a leader, and will probably deliver a more complex and less appealing solution.)

There is an interesting omission in the Apple service, and one thing that will make you say, “Hmmmm.”

The omission? For some reason, Apple is introducing the service with no arrangement for viewing the photos online. Although Apple will be holding onto your photos in cloud storage, it is not setting up any front end that will let you share an online slide show with your friends or view your photos without downloading them. You’ll still be able to send photos to Facebook or Flickr or Picasa, of course, but that requires the extra step that iCloud is intended to avoid. As of now, the best that TechCrunch can find out is that “the decision has not yet been made” about whether photos will be viewable online.

It’s possible that Apple does not want its servers to be overwhelmed with the sheer volume of photos being taken now, because it is also not volunteering to store your photos forever. The iCloud service will not be a backup for your photos! It will store up to 1000 photos, for up to 30 days. Take more than a thousand photos and the oldest ones will begin to disappear from Apple’s servers (not from your computer, presumably). Although that’s a lot of photos, don’t underestimate how many pictures some people are taking! That might be less than a month’s supply.

The “Hmmm” moment? Each time you snap the shutter – each goofy group shot at a party, each landscape, each cute puppy – creates a file that is somewhere between 1.5Mb and 3Mb. In the simplest form of the iCloud service (and as it’s being promoted), every photo you take will be uploaded to Apple’s online servers right away.

It ought to give you chills to think about that when you read Verizon’s internal letter announcing that it will begin capping the amount of data permitted by the data plans that will be sold with new devices starting July 8. The days of unlimited data are drawing to a close. Verizon is following in the footsteps of AT&T in imposing caps that result in huge surcharges if you go over your monthly limit for data.

All of the important trends in modern computing are built on huge transfers of data to and from the Internet – storing files and mailboxes online, streaming Netflix videos, making voice calls with Skype, and more. The cell phone carriers are happy to encourage those trends as long as they can profit from your ever-increasing appetite for data. (Wired broadband providers are starting to put data caps into place, too – Time Warner, Comcast and others are well down that road. Remember, despite the protests, this has nothing to do with quality of service. This is about greed.)

There will be a plethora of plans for different amounts of data and lots of details to misunderstand. Can you tether the device to your computer? For a price. Is your old unlimited data plan grandfathered? For a while.

When you take a lot of photos with your iPhone and happily look through them on your iPad, you will enjoy the convenience of the iCloud service, but it will be hard to avoid a shudder of fear at the possibility that you are going over the limit and might receive an unexpected bill from AT&T or Verizon.