I have a story about web hosting.

When you visit brucebnews.com, all the pages pop into place instantly. Do a search or click on a link and you’ll see the result right away. That’s what you expect from a web site, right?

Until last week, that’s not what you got from my news page. It would almost always take a few seconds for a page to appear. In the middle of the day, pages might take 10-20 seconds to appear – an eternity.

There is an interesting story about what changed.

Bruceb News is built on WordPress, the publishing platform that powers a huge percentage of the blogs in the world. You can start your own blog for free at WordPress.com, but bloggers who want more control set up a hosting account with a web hosting company that supports WordPress. There are endless plugins and widgets and themes for WordPress, all run from an online dashboard. It’s easy enough for novices to get started but there is tremendous power and complexity under the hood.

I have registered domain names and set up hosting accounts with GoDaddy for years. It is the largest name registrar in the world. GoDaddy prices are reasonable. Control panels are confusing but everything is accessible if you look long enough.

So I set up the WordPress hosting account for Bruceb News with GoDaddy. It is well integrated with GoDaddy’s other services so setup was a snap.

It wasn’t so awful that I had to do something drastic but I’ve spent two years with the uncomfortable feeling that something wasn’t right. The dashboard was slow. Changing a post was slow. Adding a widget was slow. The unforgiveable problem: pages were displayed slowly to people visiting the site. When you’re running a web site, the last thing you want is a delay before people can see your pages. It creates a poor impression and can even hurt the business, since Google will slightly downgrade slow sites when it delivers search results.

Earlier this year I did some research and discovered that the answer was simple: GoDaddy does a terrible job hosting WordPress sites. It overloads its servers and deflects inquiries and complaints. I followed some of the suggestions on the GoDaddy support page, all of which amount to repeating “not our fault, not our fault” over and over:

Why is my WordPress site running so slowly?

. . . To speed up your site, try these third-party solutions:

I upgraded to GoDaddy’s more expensive “Deluxe Shared Hosting” package. Not much changed.

Eventually I did a Google search for “godaddy wordpress server slow” and discovered what had become obvious, that GoDaddy just doesn’t do a good job with WordPress hosting. A single server might be hosting thousands of WordPress sites. There is no solution except to switch companies.

There was another thing that had been nagging at me. GoDaddy was founded by Bob Parsons, who continues to be its CEO today. There is a fair amount of evidence that Bob Parsons is really, really obnoxious. The company’s marketing is built almost entirely on sexist ads featuring busty women. It delights in the controversy when it submits sex-themed ads that are deemed “too racy” for the SuperBowl, so it can put them on the GoDaddy home page. If you go to the site today, you will see a big picture of NASCAR driver Danica Patrick, the current “GoDaddy Girl.” For years the home page has had something like this at the bottom: 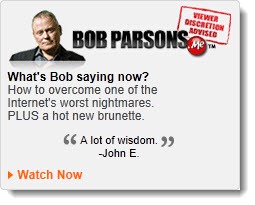 “What’s Bob saying now? How to overcome one of the Internet’s worst nightmares. PLUS a hot new brunette. Viewer discretion advised.”

This is juvenile and stupid and I don’t like it one little bit. It doesn’t make me giggle. It doesn’t belong on the home page of a multi-billion dollar company.

Then Bob Parsons hit the news with an incident that sounded so hateful that it singlehandedly made me want to stop doing business with the company. He spent a bunch of money on an expedition to Africa to hunt and kill elephants. Then he posted a video with graphic pictures of the elephant he shot, showing him posing proudly next to the carcass while the AC/DC song Hell’s Bells plays in the background, with frequent shots of the GoDaddy logo so that it comes across as his idea of an advertisement. (The video has since been edited to remove the most obnoxious bits. And the AC/DC song.)

When people exploded in outrage, Parsons lamely attempted to explain that he was actually doing the natives a favor because they’re starving and with his help they could fight each other to carve off a piece of the carcass for food. “When you see me smiling in that picture, I’m smiling because I’m relieved no one was hurt, that the crop was saved, and that these people were going to be fed — the type of smile when you get a good report card or achieve a goal,” he says.

From Vanity Fair’s article about the video:

One devoted hunter I know summed up the entire incident in the following cynical terms: “It has everything,” he said. “A rich fat American paying for a ‘canned hunt,’ pretending he is doing it as an act of condescending kindness, starving Africans behaving uncontrollably. It really nails all the great stereotypes.”

I don’t often make decisions based on just plain not liking a person or a company but – I don’t like Bob Parsons. I’m going to take my little tiny bit of business elsewhere.

I researched WordPress hosting companies and moved the Bruceb News site to BlueHost after reading many positive comments. When I needed help during the transition I called support twice. Each time I was connected almost instantly to a knowledgeable and friendly support person who solved each problem right away. It was nice.

The BlueHost home page has descriptions of their services. No sexy NASCAR drivers. No “viewer discretion advised.” No elephants. I like that.

And when you visit the Bruceb News page, it should appear right away. Try to appreciate what a treat that is!