Are you a Facebook user? You probably noticed the significant makeover to your Facebook page on Wednesday. Your news feed is now formatted a bit like a newspaper or online magazine, with “top stories,” a “ticker” feature on the right, “smart lists” on the left, and what appears to be some new methods of filtering the feed to show you a small portion of the flood being posted by your six hundred friends. That’s not all – there are more tweaks already in place.

Those are the minor changes.

The big changes will be announced at a Facebook developer conference on Thursday – likely to include various hooks into music services, possibly some kind of connection with Hulu, and perhaps new “Read,” “Listened,” “Watched” and “Want” buttons to sprinkle around on other sites and tie back to Facebook.

Reactions have been mixed. 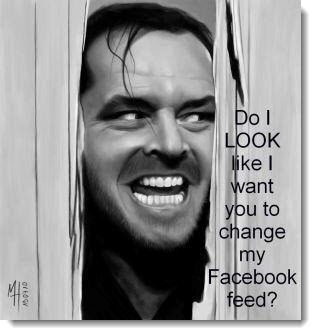 Meanwhile, not by coincidence, a few days ago Google opened Google+ to anyone who wants to sign up, after three months of invitation-only access. New features have been added regularly and nine more were summarized in Google’s post this week: “hangouts” (video chats with groups of people) on mobile devices or as broadcasts to larger audiences; screen sharing and shared sketchpads; searches in Google+; and more.

Just a few days ago Google+ was being called a ghost town, a failed experiment. Now it looks like Google will be putting some effort into promoting Google+, perhaps hoping to capitalize on unhappiness with Facebook’s changes. Here’s what Google’s home page looks like on Wednesday night – that’s Google drawing the arrow (not me) to call attention to the Google+ button in the upper left: 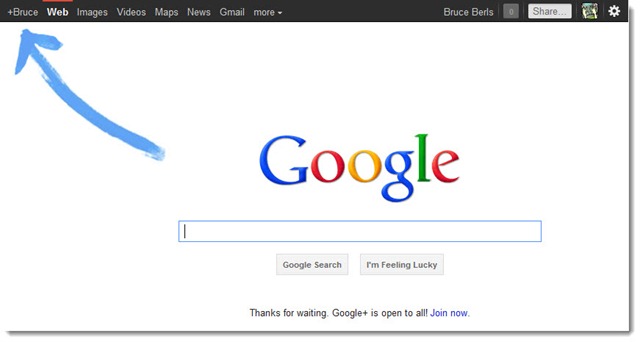 One of the things that has become obvious is that online services like Facebook and Google+ can be just as fiercely complicated as any program that you might install on your computer.

Let me confess something to you: I find Facebook to be nearly incomprehensible. I find no rhyme or rhythm in what it decides to show me by default, or what turns up when I switch from “Top News Feed” to “Most Recent.” I’m even more adrift tonight after the “Most Recent” button has been retired, wondering what’s displayed and what has been hidden. The page is cluttered and I have found my way by accident to any number of options that were not where I expected and which I could not find again if I tried. Explanations like this make it obvious that Facebook goes much deeper than the surface that I have explored:

This latest flurry of updates caps off a steady flow of tweaks over the past few weeks. You now subscribe to your friends’ updates as you would an RSS feeds. You can subscribe to people you’re not even friends with. You can organize friend groups by type (in Google+ fashion), not just for chat purposes. And you also have more on-the-fly control over who does and doesn’t see your wall posts.

A lot of Facebook’s changes are designed to shoehorn in features that mimic Google+, which has the same murky depths hidden under a cleaner interface. Other changes, especially the music and video hooks, are the product of insatiable greed and the need to monetize your time on Facebook. A few of the new features are aimed at making Facebook more useful, although that seems to be an afterthought.

I’m not suggesting that Facebook is impossible to figure out, or even uniquely difficult. We can all learn to use Facebook or Google+. Motivated users can spend time learning their way around, just like dedicated Photoshop users can use the program to work magic with photos. I was going to say, “It’s not rocket science,” but that’s not quite right – there is some overlap. We could all learn rocket science, too. We just choose not to because it’s hard.

And that’s my concern. What I hear from people is exhaustion. I think we’re near the tipping point where noticeably large numbers of people just tune out. Admit it – when you read about cloud computing, and a new model of Android phone released every day, and tablets that go off the market before you knew they were on the market, and overwhelming numbers of iPhone apps, and online services that are probably too complicated to use but it doesn’t matter because you can’t remember your password – don’t you feel at times like giving up?

I think people will start to give up. Not a Contagion-style week where everyone goes slack in front of their screens all at once, but an increasing malaise and distinct lack of enthusiasm for the latest and greatest.

I have this in mind because of blanket coverage in the tech world of Windows 8, the next version of Windows, which was extensively previewed at a Microsoft conference last week. We will talk much more about it later; it’s not the right time to start talking about specifics. (Lots of information and screen shots here, if you’re interested.)

If you feel unsettled by the changes in Facebook and Google+, then a shiver should be going down your spine at what 2012 holds. Microsoft is rewriting Windows nearly from the ground up. The scope of Microsoft’s ambition is breathtaking. Most of the attention is being given to the new user interface, the screens that you will see when you push the power button, and rightfully so – that’s obviously a huge part of your experience with Windows and it’s going to be completely overturned.

Trust me when I tell you that the big changes are happening under the hood. The desktop version of Windows and especially Windows Server are being rewritten to fit situations that I can barely imagine, in a new world of virtualization, cloud services, new and incompatible processors, and multiple form factors. Remember when I mentioned the possibility of using a computer that didn’t physically exist near you? Oh, let me tell you, that’s the least of it. It’s exciting and scary and promises to be utterly tumultuous.

I don’t have any advice or anything that you should do differently. We are already well past the point where it’s possible to keep up with technology; the next step is to discover what our individual filters will be to keep from screaming. Some of you will be filtering pretty aggressively, or perhaps starting to scream. A lot of Facebook users are screaming tonight. Meanwhile I’m going to be staring in my cloudy crystal ball trying to figure out what role a consultant will have in a world that is not just turning upside down – it’s turning somersaults and it’s about to be going faster and faster.