Many people instinctively protect their privacy. In their minds, it’s not anybody else’s business where they shop, who they visit, what they talk about, or what movies they watch.

The divide is getting wider between naturally private people and the rapidly growing number of people who simply do not have that instinct and are living their lives in public with no reluctance and little regret. Facebook is the obvious source of much of the information being made public but it is only one of many ways to put your life online. Between Facebook posts and photos and location-based phone apps and activities tracked by advertisers, almost everyone is able to be followed online to some degree, voluntarily or not.

The interesting difference is the reaction to learning about some new way that information about you might be leaking out. Private people will be worried and look for details about how to turn off the information spigot. Others, though, will literally not care one whit; to people living publicly, getting information online is useful and privacy arguments are irrelevant. It’s getting to be something like a religious difference where the believers in privacy can’t talk to people who don’t care – they’re coming from such different places.

Let’s describe a way that you might be putting unexpected information about yourself online. You decide what kind of person you are. Do you care?

The market for inexpensive pocket cameras is drying up. Overwhelming numbers of people are taking all of their pictures with their phones and sending them online. According to a recent report, Facebook hosts 4% of all the photos ever taken in all of human history – roughly 140 billion photos at last count. Here’s how Facebook’s photo collection compares to the next largest photo libraries in the world at Flickr, Instagram, and the Library of Congress. 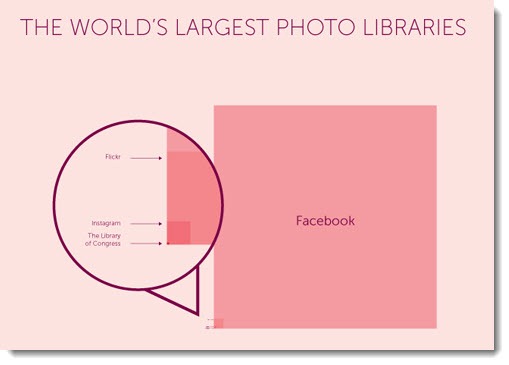 There are many photographers using nice SLR cameras, and small cameras haven’t disappeared, but make no mistake – the flood of incoming photos are coming from iPhones and Android phones and other mobile devices.

Digital photos record a wealth of information known as EXIF data, stored in the file along with the bits that record the actual picture. Along with a thumbnail image of the photo, EXIF data holds details about aperture, shutter speed, focal length, metering mode, and ISO settings. You can see some of that information in image programs on your computer. This is what Windows 7 displays when you right-click an image and click on Properties, for example. 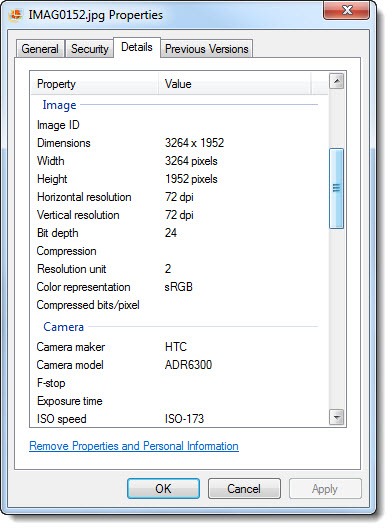 Mobile phones can store the precise geographic location where a photo was taken. Anyone who can read the EXIF data knows exactly where the photographer was standing. It’s called geotagging – storing latitude and longitude data inside an image’s EXIF data. When you take pictures with your phone and upload them, you might be leaving a trail of exactly where you go with your child, or where you hang out after school, or where that party really took place.

Some newer SLR cameras have GPS and geotagging built in but it’s still relatively rare. Pocket cameras almost never had the ability to do that.

Your phone, on the other hand, almost certainly has the ability to store geotagging information with each picture, and it might or might not be turned on. There are some tips at the bottom of this article about how to check the status of photo geotagging on iPhones, Android phones and Blackberries. This article helps you remove information from photos that you’ve already taken.

As more and more images with geotagging data are uploaded, security experts are starting to issue warnings. The New York Times described the problem recently:

When Adam Savage, host of the popular science program “MythBusters,” posted a picture on Twitter of his automobile parked in front of his house, he let his fans know much more than that he drove a Toyota Land Cruiser.

Embedded in the image was a geotag, a bit of data providing the longitude and latitude of where the photo was taken. Hence, he revealed exactly where he lived. And since the accompanying text was “Now it’s off to work,” potential thieves knew he would not be at home.

It’s getting easier to use the EXIF data. There are plugins for Firefox and Internet Explorer that will automatically read the EXIF data on any online picture and bring up a Google Map that points to the location.

ICanStalkU is raising awareness by running a constant stream of the location of Twitter users with links to a picture, a map of the location, and the original Tweet.

Let’s ratchet up the emotional level with a panicky report from NBC Action News that dramatizes how geotagged photos will inevitably lead to your small child being kidnapped.

From the accompanying article:

“That is legitimately terrifying,” said McDonald when we showed her information we obtained from pictures she posted of four-year-old daughter Laine.

It’s a new and frightening threat to parents.

The full risk is even an unknown to many internet crime experts, like [School Resource Police Officer Mark] Chudik, who said he’d never seen private information shared so quickly in such an unknown manner.

“It’s probably going to be number one for a while,” Chudik said.

Chudik used a free browser add-on to click on pictures of four-year-old Laine.

He not only found her home when he clicked on a picture of her bedroom, but located her day care, favorite fast food shop, and the specific part of the park where she plays.

“The fact that they found the bedroom is terrifying,” McDonald said.

Some of you are horrified. You want to go read the articles about how to find out if your phone is sending this information online, and turn it off. You’ll worry about whether you’ve already revealed something personal.

Some of you are yawning, or you’re wondering if there’s some app that will turn this into something interesting that you can use. Privacy? Why? Yeah, we all have times that need to be private but all the tools are in our control. The default is to disclose information and live online.

Which one are you?

Watch for variations on this issue in the next few years. Facebook intends to accumulate more and more information until it becomes the quite literal record of your life. There will be a fair amount of oversharing, as predicted in this article. Start to think about how you feel about that!