Small Business Server 2011 Essentials has one overlooked feature that fills an important need in most small businesses. Every night, SBS 2011 Essentials backs up all of the workstations in their entirety.

Microsoft originally developed this backup technology for Windows Home Server. Microsoft did some of its best technical magic on the backup system to use the least possible space on the server hard drives and to make the backups quick (although they’re done in the middle of the night, so speed isn’t really an issue). Basically, the server software never copies a duplicate file. The first computer is backed up in its entirety; the server then detects common files on each subsequent computer (Windows files, program files, even data files) and adds an entry to the index without copying the files a second time. If you add up the used space on the hard drives of all the computers backed up on an SBS 2011 Essentials server, you might find that the actual backup files take only 20% or 25% of that space on the server hard drives.

The backups can be used to restore individual files, of course. There are always files on workstations that are valuable, even when users are encouraged to store everything on the server. Without workstation backups, you don’t have a backup of the owner’s well-groomed Internet favorites, or the .NK2 file that the partner treats as an address book, or the files that the bookkeeper insists on saving on her desktop despite warnings, or the .PST archives that the busy associate creates on his laptop. You don’t have the desktop icons arranged just so by the partner in the corner office that hates computers.

The server retains backups of those files for a long time! By default, space permitting, daily backups are retained for five days; weekly backups for 4 weeks; and monthly backups for six months. That provides tremendous flexibility to go hunting for files that went missing. 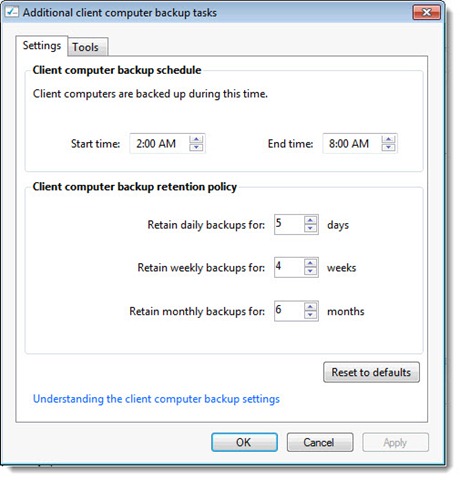 There is another situation, though, where the workstation backup is crucially important. If a hard drive on a workstation fails, the backup turns out to be an image that can be used to restore the computer in its entirety very quickly.

Really, it’s that simple. If there are glitches – a network driver is missing, say – the server leads you through an elegant process to help you get it onto a USB stick and get things moving. 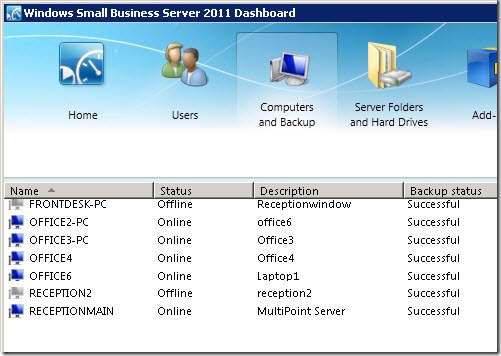 Here’s how I described the same backup technology in Windows Home Server:

Look, I can see that you don’t appreciate this. You’re not focusing. Read that again. Or imagine that I’m standing in front of you, talking louder and looking animated and practically grabbing your arm and shaking it to make you understand that THIS IS INCREDIBLY IMPORTANT! This little box will automatically do backups that give you complete disaster recovery for 10 workstations for five hundred bucks. Backups are kept for months so you can recover deleted files or roll back to the computer’s condition before a malware attack. No reinstalling Windows, no need to dig out old license codes, no hours of installing updates before the computer is safe. Just a few minutes to boot from the WHS CD and 45 minutes watching a thermometer tick towards the end, and the computer is restored.

Ooh. I’m tingling. Words can’t describe how good this is.

Small Business Server 2011 Essentials delivers the same technology for up to 25 of your business computers. It still makes me all tingly.

The same technology is built into Microsoft’s companion product, Windows Storage Server 2008 R2 Essentials, meant to be used in businesses that already have a domain controller and just need more storage space and workstation backups. Much to my frustration, Storage Server 2008 R2 Essentials cannot yet be purchased in the United States, although Microsoft assures me that manufacturers have it in the pipeline and it will turn up Real Soon Now™.

The backup system included with SBS 2011 Essentials is the same well-tested system used in Server 2008 R2, integrated into the SBS dashboard. Many small businesses will feel it’s sufficient to buy two large external hard drives and swap them once a week. Conscientious businesses will take one offsite. (You’d be surprised how many business owners can’t be bothered. Sigh.)

The drives are devoted to the backup system, not available to be used for any other purpose, but the backup software rewards that dedication by retaining backups for quite a long time, and managing the space automatically so the backup does not fail because the hard drive has filled up. (There are limits to how much it can do if space is limited. I’m setting clients up with backup drives that have at least 4-6 times more space than the material to be backed up – more if possible.)

By default the server backup includes the workstation backups, in their entirety. Storage space will get to be an issue for some offices, leading to more complex (and more expensive) storage devices to hold backups.

Worth noting: it’s claimed that the SBS 2011 Essentials server can also back up other servers with the same technology used for the workstations. Second servers in small businesses might be running all kinds of things that are difficult to back up – SQL Server, say, or line-of-business apps running on other databases. I want to do some testing before I’m convinced that this backup system is SQL-aware and capable of doing a cold-metal restore on oddball server hardware. That’s an ambitious claim – but there it is in the literature.

There may be good reason for businesses to consider ShadowProtect or another backup program instead of using the built-in Microsoft software. There are elaborate partnerships springing up with Storagecraft for integrated onsite and cloud-based backups built on ShadowProtect (Doyenz, for example), and ShadowProtect backup files can be manipulated in ways that are quite magical. (Take a look at StorageCraft ShadowControl Image Manager, for example. I saw a product demo recently that left me amazed at the possibilities, as well as a little depressed by the complexity.) The backup included with SBS 2011 Essentials is quite good but there is room for discussion about whether it suits your particular needs.

I’m impressed by Small Business Server 2011 Essentials. It strikes me as the right product at the right time for small businesses, in much the same way that SBS 2003 did. I look forward to setting it up for some of you. Give me a call if I can answer any questions!