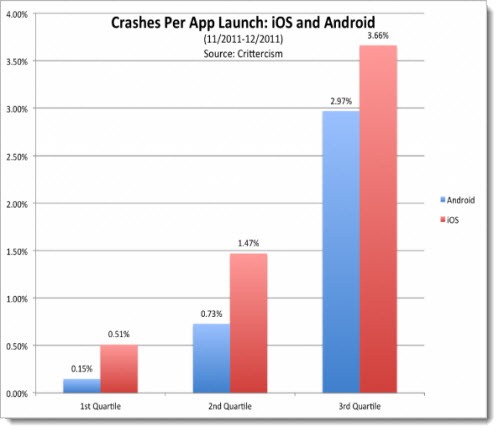 Previously: Technology Is Not Getting Easier!

Forbes published an article today that provides a nice postscript about new devices becoming more complex and cranky. Do iOS Apps Crash More Than Android Apps? A Data Dive is rich with details but the important lesson is that these simple, reliable devices in our pocket crash all the time. It’s not just you.

The details are interesting and the article is loaded with pie charts that break down crashes on mobile devices in lots of ways. (Conclusions: apps on Apple devices crash slightly more often than Android apps, but data from the end of 2011 might have been skewed by the release of iOS 5, which required a fair amount of rewriting for apps to work reliably. The pendulum might swing as Google rolls out Android 4.0 this spring.)

When you list the various reasons that apps crash, it’s easy to see the fragmentation that is making our technology world less reliable. Excerpts from the article:

Next time you restart your phone, go with a resigned shrug instead of anger. You’re not alone.