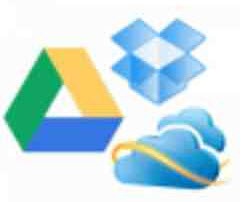 Microsoft and Google each introduced services this week that are copies of Dropbox in rather precise detail.

Taken together, these services represent a fundamental change in the way we use technology. Here’s my best effort to sum it up:

Storing files on one device or in one physical location is now just another option – and not a very useful one.

We are using multiple devices in multiple locations: our own computers at office, home or on the road; smartphones and tablets; and borrowed and public devices. These services (and all their less well-known competitors) give you equal access to those files at all of those locations on all of those devices.

That is simple and easy to understand, which is part of why it is also enormously powerful. You will quickly just expect your technology to do this for you.

Within that framework, there are small differences between the various services. The Microsoft and Google announcements have been analyzed to death this week in the tech community; if you’re curious you can find elaborate charts comparing the prices and features and endless articles about the details of each one.

There’s no right or wrong answer about whether you should be using one of these services – and if so, which one. Here are some thoughts to help you get oriented.

Google Drive is an enhanced version of Google Docs. You can open word processing files and spreadsheets using Google’s online apps in your web browser (which Google hopes will be Google Chrome). Then you can send links from your Google Gmail account and share them on your Google+ page.

Microsoft’s new Skydrive app replaces the crippled Live Mesh (which still technically exists but is likely to disappear soon). You can open word processing files and spreadsheets using Microsoft’s Office Web Apps in your web browser. Then you can . . . well, you can guess. Lots of interaction with other Microsoft services and programs.

Skydrive will be built even more deeply into Windows 8. Every Windows 8 device will provide access to files in Skydrive just as easily as anything stored directly on the device. Every Windows 8 app that works with files will be required to have Skydrive access built in. The other services will run on Windows 8 too so it’s hard to know yet if that’s an important advantage for Skydrive.

Some people will have strong opinions about why (this one) is clearly superior and the only reasonable choice. If you picked (that one), you’ll wonder if you should switch or run them both.

Each one of these services has rich features that deserve time and attention. Pick one and stick with it. Learn its quirks. Learn how to share things. Wrestle with the things you don’t understand. There may come a time when you can clearly articulate a reason to switch. If and when that time comes, make the change. Until then, don’t dabble with more than one.

Not to mention that you’ll have trouble remembering where you stored things if you’re using more than one of these services.

Dropbox is a marvel. I am not aware of any claims that data has been lost by someone using Dropbox. That is an extraordinary technical achievement. It is fast, accurate, and rock solid after years of being used in production.

There’s a good chance that the same thing will be true for Microsoft Skydrive and Google Drive but my conservative nature wants to see how they fare for the next few months before I commit to them.

Dropbox enters this battle with goodwill and name recognition. Google and Microsoft rolled out very, very big guns this week and it’s obvious that their shared goal is to blast Dropbox into irrelevance as quickly as possible. They may succeed. They are, after all, two of the three 80-trillion-ton gorillas in the tech world. (And Apple may step into this as well with an expansion of iCloud.)

I like Dropbox. I hope it goes toe to toe and holds its own against the giants. I’m sticking with it for now.

Individual businesspeople can and should use one of these! This is an invaluable way to get files home or onto a notebook or tablet.

They are not really well suited to be the central document repository for the entire business or for all the files created by a law firm. Dropbox and Google Drive both have some tools for small businesses but there are many shortcomings in control and security, difficulties with the way the services handle drive space, and more. Small businesses and law firms may have other methods to provide access to files (for example, the web portal in Small Business Server 2011 Essentials), or they should look into true business-oriented solutions like Box.net, Sharepoint, or NetDocuments.

Each company has published the APIs that will allow developers to make programs that use these online storage and syncing features. Microsoft has made Skydrive just as open as the others, something it might not have done in the past. It’s yet another way that 2012 will have a Wild West feeling as developers big and small jockey for position.

There is more to be said about these services. Expect a stream of announcements as prices and space allocations are changed around and features are added. Google is enduring an early kerfuffle about its license terms, which make it seem that you have surrendered your information to Google when you add it to Google Drive. Skydrive doesn’t have a way to selectively sync folders to some computers, creating the risk that a big Skydrive folder could overwhelm a small SSD in an Ultrabook. (This service) does a better job displaying (this kind of file) on (this kind of device). Google Drive isn’t available to everyone and Google doesn’t have its app ready for iPads and iPhones quite yet. On and on and on it goes.

[Do you want me to just tell you what to do? Try Dropbox. It’s awesome. Let me know if you need help getting started!]