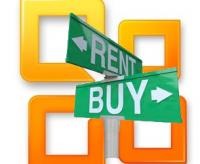 Microsoft announced pricing for Office 2013, due to be released early next year. When you upgrade Office or get a new computer, you’ll choose between starting a subscription for an Office 2013 license or buying it outright as you have in the past, and you might be surprised – the table is tilted firmly in favor of a subscription from almost every perspective, including price, flexibility, upgrade rights, and features.

Almost everyone acquires Microsoft Office for their Windows computers. Even home users need a word processor sometimes, and offices require at least the core programs: Word, Excel, Outlook, and Powerpoint.

If you’ve ever purchased a computer from a brick and mortar store, Best Buy or Staples, say, then you know the sinking feeling when you discover that Office has to be purchased separately. Out comes the wallet for another $125 for the Home & Student version without Outlook, or a couple of hundred dollars for the Home & Business version with Outlook.

Small businesses buy Office preinstalled by Dell for a couple of hundred dollars for each new PC. Larger businesses pay roughly the same amount but they get volume licenses and install it themselves.

It gets expensive quickly. The cost is sometimes hidden from view, not broken out on the Dell invoice and not included in the price listed in the Best Buy advertisement, but it’s a big part of a computer purchase. It was a little daunting to look ahead to the time when we are likely to be buying more devices than ever.

Office 365 Home Premium  For $100/year, you can get a “household license” for Office 2013 that can be installed on up to five PCs or Macs, used by anyone in the family.

Office 365 Small Business Premium  For $150/year, a single user will be able to install all the Office applications on up to five PCs or Macs.

If you’re suspicious of subscriptions, you’ll be able to purchase a license for Office 2013 just as you do today, but you’ll find that the rules have been changed to make it less appealing.

The list price of each of the Office 2013 products has been increased. More dramatic, though, is the way the licenses have been locked down. When you purchase a license for Office 2013 Home and Student or Office 2013 Home and Business, it can be installed and activated once. Not twice, not three times – one computer, one Office license, one activation.

The math gets very complex to figure out whether a subscription or a purchased license is more expensive. Pull out a spreadsheet and calculate whether you’re likely to get another computer or notebook or tablet in the next three years, add the possibility that you might want the next version of Office in a year or two (included with the subscription, not with the purchased license), divide by the number of years you’ll use the subscription or license, take the square root of the extra features included with the subscription, and multiply by the only important factor, which is whether you’re the kind of person who simply can’t tolerate the thought of not “owning” the programs.

The Office 365 features and pricing are compelling for everyone except the most subscription-averse. The flexibility fits the new environment with ever-multiplying numbers of computers, laptops and tablets. It’s a good deal for consumers and a no-brainer for small businesses.