A Snapshot Of The Tech Market 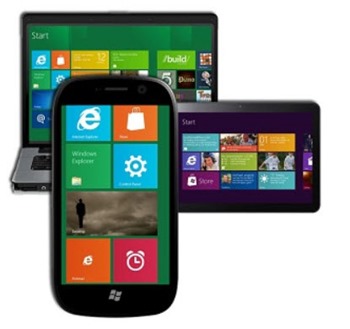 Let’s catch our breath for a minute and do a quick recap of where things stand as we head into November.

Windows 8 is becoming available, at least as an option, on new computers from the major manufacturers. At the moment everything is in transition, so you might run into something like the order page this morning for a Dell Inspiron 14z Ultrabook, which says in boldface “Dell Recommends Window Pro 8” and then does not offer Windows 8 as an option. (You’ll be able to upgrade new Windows 7 computers to Windows 8 cheaply or for free, if you choose.) 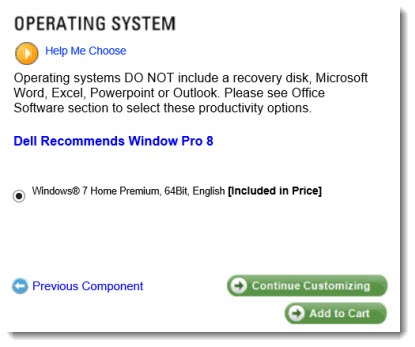 Then there are the hybrids that are coming on the market this month, notebooks with touchscreens, notebook/tablet hybrids with detachable keyboards, notebooks with screens that twist around and lay flat so they can be used as tablets, and much more in a blur of form factors.

Notebook prices used to go up and down mostly for aesthetics. There will still be some of that but paying more for a notebook might also make your next notebook thinner and lighter, with faster start up times and longer battery life, or give you a touchscreen or a detachable keyboard, or something else that will increase its value to you.

Fortunately almost everything on the market will have enough processing power and storage capacity to meet your needs and Windows 8 runs smoothly on all of them – you’re unlikely to make a terrible mistake when you pick something. Personally, in addition to Dell, I’ve been buying notebooks lately from Lenovo, which is offering some of the best engineering and most interesting choices on the market today. 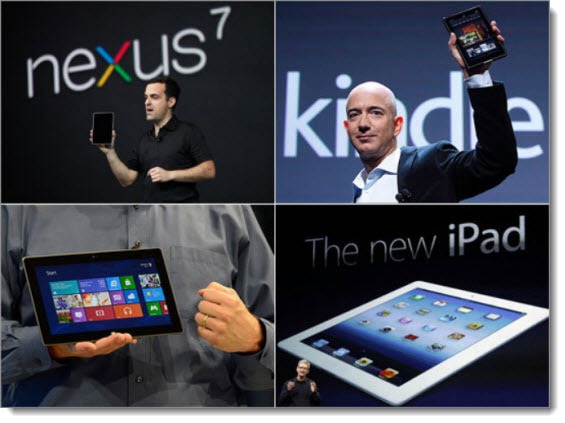 Google just introduced a 10” Nexus tablet to go along with its 7” tablet.

Amazon has 7” and 9” Kindle Fire tablets.

Microsoft is shipping the 10.6” Surface tablet with Windows RT, the limited version of Windows that does not run legacy Windows programs. I’ve been using the Surface tablet for a few days and I’ll give you some first impressions soon.

It is tempting (and confusing) to compare tablets on price and features, but it also misses the point. For a while to come, a tablet will be an accessory to the computer where you do your work, not a replacement for it. Your choice of tablet ought to be driven primarily by the ecosystem that surrounds it.

If you have other Apple devices, an iPad will integrate with those other devices and give you access most easily to your files, music, photos, and apps.

If you are a committed Google user, an Android tablet will connect to your Google account and sync the Google part of your life.

Microsoft’s selection of tablet apps is thin and some services are still being fleshed out – Xbox Music and Pandora for streaming music, to pick one example, are either just now being rolled out or won’t be available for a few months. But Microsoft is quickly developing a better system for syncing your files among different devices and letting you work with them using familiar Office programs, and the Microsoft ecosystem will extend more deeply into Windows 8 computers than anything offered by Apple or Google.

And it’s worth noting that if you are starting from scratch and you will primarily use a tablet to consume media – to play games and watch TV shows and browse the web – any of the tablets might work fine for you. They’re marvelous consumer toys.

Apple has the iPhone 5, an elegant device with an endless selection of apps to make it the center of your social life and an essential accessory.

The lineup of Android phones is fragmented but the best of the new Android phones have a reasonably well-designed interface and their own deep selection of apps. There is a wide selection of sizes, styles, and prices. Many people will use them as stand-alone devices and not expect them to be particularly integrated with their computers or other devices. 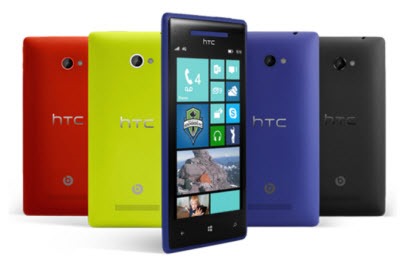 Microsoft introduced Windows Phone 8 yesterday, which will be available this month from Verizon and AT&T on phones made by Nokia, HTC, and Samsung. Again, there will be fewer apps at the beginning, and some vital apps will be missing, but the Windows 8 interface is unique, attractive, and functionally a step ahead of any other phone, both in the rich feedback from the live tiles on the home screen and the ease of moving around and getting things done. The phones will also be integrated deeply with your Windows 8 computers and tablets, and the interface is consistent among all of them. Those are advantages that you won’t get from iPhones or Android phones that might tip the scale towards Windows Phone 8.

It promises to be a rewarding but difficult shopping season. There are many new things but we are long past the days of one-size-fits-all devices. Let me know if you need some help cutting through the fog (and forgive me if my answers only move the fog around without clearing it out).