Windows 8: The Shift To Mobile Devices 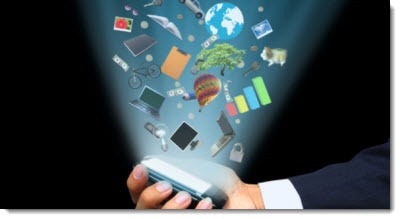 In order to understand why Microsoft has created Windows 8, you have to look at the long-term, fundamental change in the way the world uses technology.

We are in the middle of a massive structural shift from computers to phones and tablets. Mobile devices, not desktop computers, are the future of general-purpose computing.

If Microsoft had not embarked on a major shift in its core business, it would have seen its business flatten and then begin a long decline. All the evidence you need is in an article in this week’s Time magazine about the future of computing.

The headline is: “Apple vs. Google is the Most Important Battle in Tech: The iPhone vs. Android fight is a dispute between two radically different visions for the future of computing.”

“Everyone agrees that the struggle for Internet advantage is shifting to the mobile realm, and iPhone and Android have surged to the front of the pack with diametrically opposed business models. Neither of these players will be vanquished anytime soon — these battles take years to play out — but the company that gains the upper-hand will be best-positioned to take advantage of the massive structural shift from desktop PCs to smart phones and tablets.”

The thing to notice is what’s missing: Microsoft is not mentioned in the article, outside of a passing reference to its victory over Netscape Navigator in the 90s.

Microsoft dominates the PC market, of course. It sells hundreds of millions of licenses for Windows every year. It could have continued doing that for many years by releasing incrementally improved versions of Windows occasionally. Business are not going to stop using desktop computers and a great many people will continue to use powerful and complex programs that do not lend themselves to small touchscreens.

In almost any way you can measure, though, the future belongs to phones and tablets, whether you count the number of units sold, the percentage of people using them, or the intangible feeling of relevance to the world going forward.

Here’s a chart that compares quarterly shipments of PCs and tablets for the last three years. 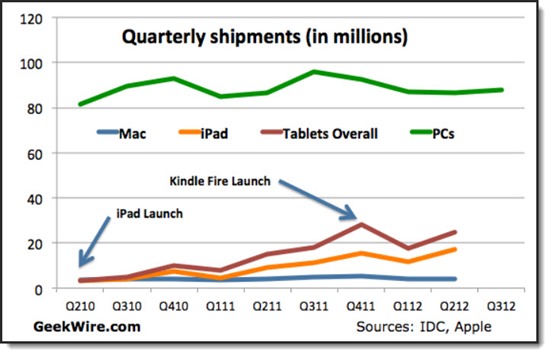 On the one hand, PCs are far outselling tablets.

On the other hand, PC sales are flat and likely to stay that way. If you project that tablets will keep growing at roughly the same rate as the last three years, they will begin outselling PCs in about two years. In fact it’s more likely that the growth rate for tablets will start climbing ever more steeply in the next few years – analysts are raising their forecasts constantly.

If you add smartphones the shift is even more obvious and even more dramatic. This chart shows global sales of tablets, smartphones and computers from 2000 to the present and then projects sales forward to 2016. The explosive growth of mobile devices is almost unbelievable. (The chart comes from a fascinating presentation in March by Henry Blodget of Business Insider – highly recommended.) 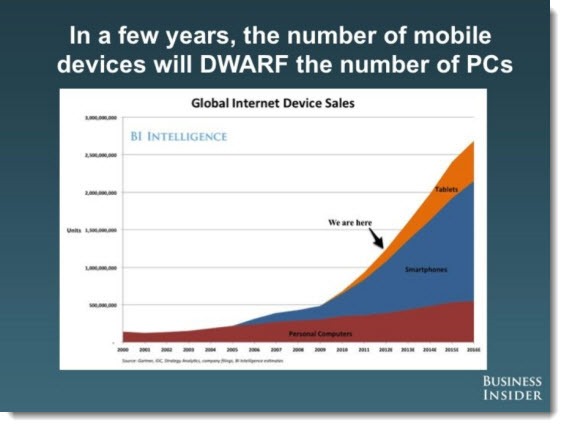 Instead of choosing the safe course of continued profits and slow decline, Microsoft has created something risky and modern, with an approach that is quite different than that taken by Apple or Google. The vision behind Windows 8 is a platform that is consistent at any scale, from a 4 inch screen on a smartphone to 27 inch dual monitors on a desktop computer. If Microsoft is successful, you will be invited into a walled garden that includes more devices than Apple, Google, or Amazon could ever hope to cover, because it includes your computers in addition to your mobile devices.

As you read about Windows 8 and think about the frustration of learning new ways to do familiar things on your computer, think about this long-term shift. You will be getting new phones and tablets in the years ahead. Everyone will. If you’ve gotten an Android phone or an iPhone or an iPad in the last few years, you’ve already learned a new operating system, starting from scratch. You may have to learn some new things about Windows 8 but you won’t be starting from scratch, you’ll be building on what you know about Windows already, and the reward will be consistency on many different devices going forward as your files and settings follow you around in an interface that will quickly become familiar.