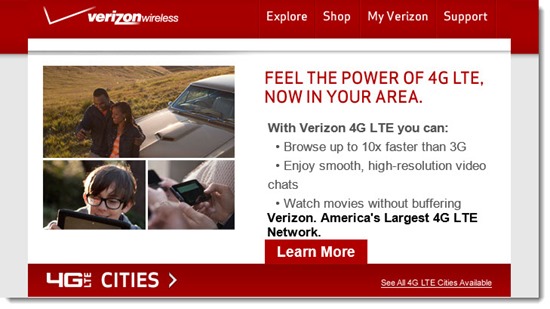 An email arrived tonight from Verizon announcing that 4G LTE service has officially arrived in Santa Rosa and nearby areas in Sonoma County. Verizon actually turned on LTE up here about a month ago; I noticed the LTE indicator lighting up on my Verizon devices and loyal correspondents left comments about it on my earlier article about 4G.

Here’s the Verizon coverage map this evening, showing pretty broad availability across the central part of Sonoma County. At my home west of Sebastopol, I’ve got just as weak a signal as before, but the two-bar data connection delivers LTE speed. 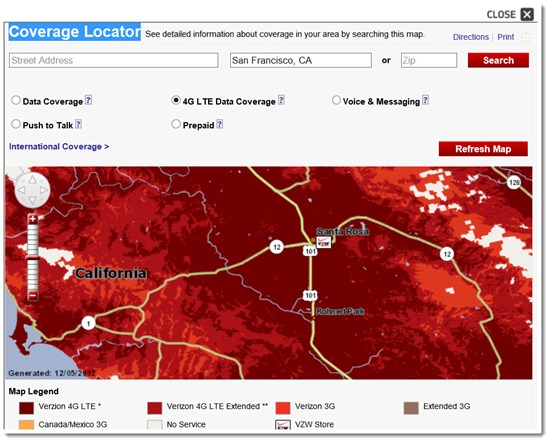 I haven’t heard any updates about AT&T. I take that to mean that AT&T’s coverage is just as bad in Sonoma County as always. AT&T announced today that it will be bringing swell new “LTE Advanced” service in the second half of 2013 but made no promises that service would be extended to areas like Sonoma County that AT&T barely pretends to serve today.

Verizon’s CEO said yesterday that Verizon fully intends to stay far ahead of the other carriers in building out a fast data network. By the time the other carriers get an adequate 4G network built, he said, Verizon will be “looking at 5G and 6G networks.”

If you’re not sure what 4G LTE service is, I tried to explain it in this article. Most smartphones sold in the last year or two are set up for LTE speed, as are new iPads with Verizon chips. If you’re lucky, you’ll be able to browse the Internet more quickly and take advantage of services like streaming video that would not have worked smoothly in the past.