Continuing our look at a handful of new features in the updated Office suite, in case any of them get you all excited. (Hey, don’t laugh – I have to sit down and fan myself with my hand whenever I think about inline replies in Outlook.) 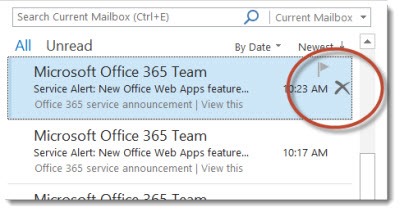 Outlook has a refreshed look and feel, with a text-based navigation bar at the bottom of the screen and the ability to quickly peek at calendars and contacts by hovering with the mouse over “Calendar” and “People” at the bottom. There is a subtle new Delete button in the message list that appears as you mouse over messages, one of those little things that is kind of absurdly handy.

INLINE REPLIES There is a new feature in Outlook 2013 that is worth the upgrade by itself, in my estimation. Replies to emails can be drafted and sent from the Reading pane without opening a new window.

Clicking one of those smaller buttons starts a draft directly in the Reading pane. When you start typing, the word “Draft” appears in the message list and remains there until the reply is sent. At any time the reply can be popped out into a separate window or discarded.

It saves valuable time with every message. If you’re dealing with a high volume of email messages, you will quickly wonder how in the world you ever got anything done without it. 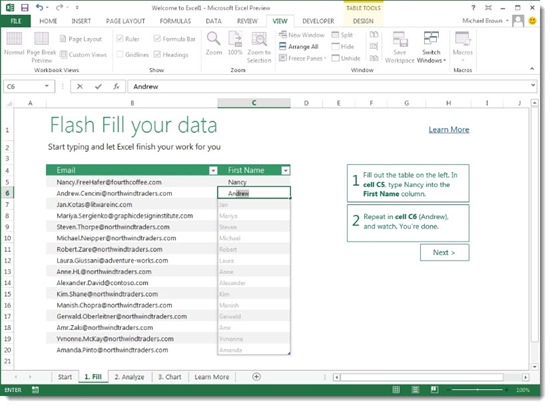 FLASH FILL There is a new feature in Excel for data entry that will seem like magic if you ever run across it. Flash Fill fills in a new column of data with data taken from other columns by watching what you’re doing.

Imagine that you have a column of email addresses in the format firstname.lastname@business.com. You need a new column with the first names. You type in the first one, start typing the second, and Excel figures out what you’re doing and automatically fills out the rest of the column. The same feature can reformat telephone numbers or Social Security numbers, convert dates, and more – no formulas, no copying and pasting into Word or any of the other tricks that have been required before this. 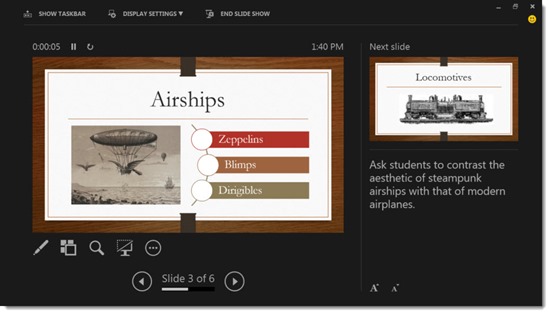 PRESENTER VIEW Microsoft answers a long-felt need with the revamped Presenter View in Powerpoint 2013. The audience sees the full slide from the projector or second monitor, while the presenter sees much more – a preview of the next slide, speaker notes, a small timer in the upper left, a button to display thumbnails of all slides so the presenter can pick one and jump ahead without flipping through all the slides in between, and more.

Presenter View is automatically enabled if Powerpoint senses two monitors. You can get a look at it on a single monitor by clicking Alt-F5.

That’s not a complete rundown of new features but it ought to give you some idea of whether the upgrade would be meaningful to you. If you are a Lynda.com subscriber, also take a look at a short presentation on new features in Office 2013.

[Update 02/06/2013: Eric Ligman has put together links to Quick Start Guides for each program, highlighting new features and changes. Recommended!]