Windows 8 And The Death Of A Thousand Cuts

Windows 8 is succumbing to the pressure from too many people with too many agendas. It’s starting to get a bit of the Vista stink. Everybody seems to “know” that Windows 8 is something to be avoided. Nobody can articulate what the problems are – it’s something they heard somewhere. “I know somebody who got it and just hated it.” “I read an article that said it was awful.”

Let’s jump to the conclusion.

–  Windows 7 is a lovely stable operating system. If you get a computer with Windows 7, you’ll love it.

–  Windows 8 is a lovely stable operating system. If you get a computer with Windows 8, you’ll love it – if you take about ten minutes to read this or have someone show you around.

Almost all the people criticizing Windows 8 are the ones who didn’t get the ten-minute tutorial. (Or they have their own agendas. I predicted this when I warned you last year to expect an onslaught driven in part by competitors and Microsoft-haters.)

Get over the obvious misconception: there are no new bugs. You don’t have to “wait for the bugs to be worked out.” The underpinnings of Windows 8 come from Windows 7, with years of seasoning and the same stability and broad driver support.

This is what’s new in Windows 8: Windows 8 has a full-screen Start screen instead of a Start menu; it has some new full-screen apps that can be used or ignored; and some commands are moved to a bar on the right side of the screen. That’s it for the big changes. If those changes leave you breathless, you should get Windows 7 – but you should also know that you’re a very sensitive person.

Let’s look at a few different types of users. Microsoft’s goal for Windows 8 was to create an operating system that would behave the same way for all of these users, on all of these devices. Windows 8 is pretty effective, given the broad range that it covers. 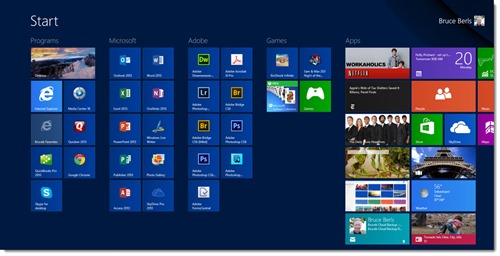 Business users  If you use a desktop computer with a big monitor to run multiple programs side-by-side, the new Start screen and full-screen apps have little to offer you. It takes two minutes to configure Windows 8 so your day is spent in exactly the same desktop that you used in Windows 7. Put the Desktop tile in the top left of the Start screen so you can get there with a single click on the Enter key. If it helps, install Stardock’s Start8, a perfect re-creation of the Windows 7 Start menu. Set Internet Explorer to open on the desktop.

That’s it. When you’re working in the desktop, there is literally no difference between Windows 8 and Windows 7 – except for improvements in File Explorer and Task Manager, and extra speed.

On my desktop computer, the Start screen (above) has the Desktop tile in the upper left, and the first three groups of tiles are all desktop programs. The full-screen apps are off to the right, rarely used.

If you have a laptop computer without a touchscreen, you’ll likely set it up the same way. Most of your time will be spent on the desktop.

Laptop users with touchscreens  When your laptop has a touchscreen, it becomes an option to do more with the new apps, which look great on a smaller screen. It makes sense to swipe through the news with the full-screen app, or to reach out and swipe up and down on web pages. The Weather app looks large and intimidating on a 27” monitor but looks grand on a 14” laptop screen.

Touching the screen is not required. You can still use your keyboard and touchpad, which work better on desktop programs where many buttons are too small for fingertips. Use the touchscreen where it’s natural, use the keyboard and mouse where they work better.

Having the touchscreen makes it likely that you’ll spend more time in the Start screen, which is easier to navigate when you can touch it. 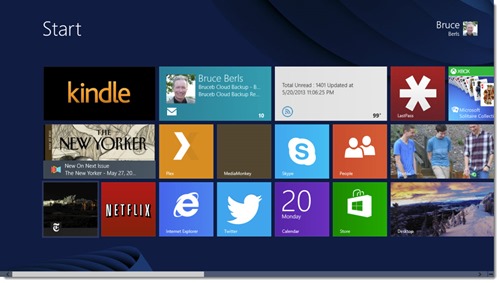 Tablet users  On a small screen, 8-10 inches, the Start screen takes its place as the center of activity, just as the home screen does on an iPad or Android tablet. On my Surface RT tablet, above, the Start screen is filled with full-screen apps and the Desktop tile is shoved to the bottom right, nearly offscreen. I use the Metro full-screen versions of OneNote and Skype instead of the desktop versions.

There is still a desktop on a Windows 8 tablet and you can open files in Word, Excel and Powerpoint, but you’ll likely spend more time using it to consume content – watching Netflix, reading Kindle books, or looking at your mail with the simplified full-screen Mail app.

Windows 8 is designed so you can ignore the parts you don’t want to use. If you’re a business user, bypass the Start screen. If you want an iPad-like experience with a tablet, ignore the desktop. Learn Windows 8 and use the parts that make sense for the device you’re using.

Many of the people complaining about Windows 8 are desktop users who don’t want to be distracted from the desktop. If you’re in that category, get Windows 8 anyway and remember you can configure Windows 8 to spend all your time in the desktop, and you can ignore the parts you don’t want to use. But take a moment for some perspective to understand why those new parts are there: the world is moving fast to tablets and touchscreen devices. Microsoft has created Windows 8 to work on screens from seven inches to twenty-seven inches – one OS, one experience that works for all of your devices. Without it, Windows would be well on the way to a long fade into irrelevance.

Later this year, Microsoft will release Windows 8.1, which will tweak the user interface in very modest ways. Although the update will be vigorously advertised as a huge improvement, the reality is that Windows 8 is easy to use and enjoy right now, no matter what kind of user you are. Don’t give in to the doubters too easily!