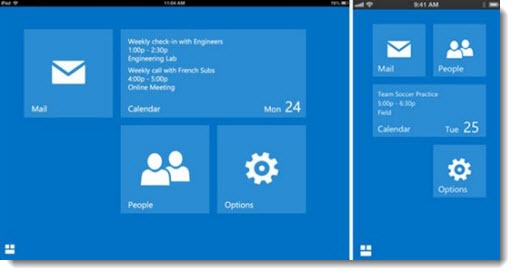 Office 365 subscribers with a hosted Exchange mailbox can download OWA for iPhone and OWA for iPad, which display your mail, contacts, and calendar in a view that closely resembles Office 365 webmail. There are live tiles, push notifications of email and appointments, integration with the iPhone address book, integration with Bing Maps and LinkedIn, and more. The apps are free but require an Office 365 subscription. You can read Microsoft’s lengthy description of the features and see screen shots here.

Today’s release adds another item to the collection of iOS apps available to Office 365 subscribers, following last month’s release of Office Mobile for iPhones. It’s increasingly clear that Microsoft is pushing to make its services available cross-platform instead of trying to convince people to lock themselves into Windows tablets and phones – which might be a good strategy, since Microsoft makes money from Office 365, while Windows tablet and phone sales are slow, to put it charitably.

It’s already possible to display your Office 365 mailbox on an iPad or iPhone, of course, using the built-in apps for mail, contacts, and calendar, all of which support Exchange ActiveSync. Using OWA for iOS is an alternative, not a requirement. 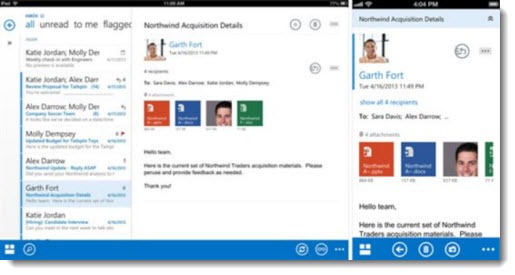 There are two reasons to use OWA for iOS:

—  The interface is streamlined, functional, and consistent with the design of Outlook 2013 and Outlook Web App, making it less jarring to pick up an iPhone after spending all day in webmail or in Outlook. If you’ve used Outlook Web App, you will immediately recognize the app’s mail interface (iPad on the left, iPhone on the right in the above picture).

—  If you need to, you can use OWA for iOS for your work mailbox and set up Apple’s mail/contacts/calendar for your personal account. I work with clients all the time who have difficulty working with multiple accounts in the Apple built-in apps.

The OWA apps will lead you through the creation of a PIN that has to be entered to open the app. That’s a basic security measure (otherwise you’d have to enter your Office 365 password), and like most security measures, it will irritate people who would rather trade convenience for security.

Since the apps are basically repackaged views of the online Outlook Web App, it’s important to note that the apps can be used offline. The mail, contacts and appointments are downloaded and stored on the device and synced when you’re online, so you can use OWA without an Internet connection.

Administrators have the power to wipe the OWA app remotely if a phone is lost or an employee leaves the company, just as it can do with the mailbox stores on all devices synced with Exchange ActiveSync.

There is no Android version of OWA, at least not yet. There is no love lost between Microsoft and Google these days and there are no guarantees, but it’s worth noting that the design of OWA for iOS is very similar to the Outlook.com Android app for non-Office 365 subscribers.