These two photos look identical to me.

This isn’t about computers, but indulge me for a moment. This is extraordinary technology and might be as important for some of you as it is for me.

Eight percent of men are red-green colorblind. (Almost no women. It’s a genetic thing.) It’s hard to describe, because my world has a full spectrum of colors – “colorblind” does not mean the world is grey. But as you can tell by looking at those photos, I’m not seeing the same colors you are. There are more examples here.

The lenses on Oxy-Iso glasses cure red-green colorblindness for some people. When I wear my pair of Oxy-Iso glasses, I can see the colors in your world for the first time in my life. 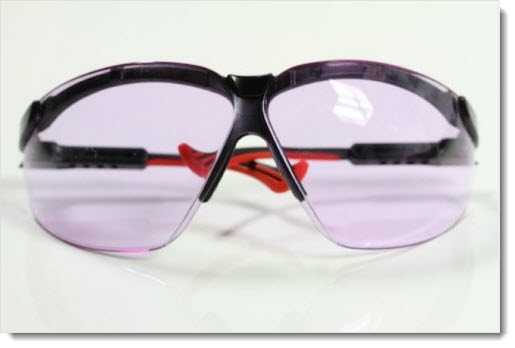 The researchers at 2 A I developed three lenses for the medical profession for clearer views of veins, blood oxygen level, bruising, flushing, and other blood physiology. The lenses adjust the color signals hitting the eyes in different ways.

The cure for colorblindness in Oxy-Iso lenses is a side effect, not the intended purpose. The company does not promise results, and there are some variations of red-green colorblindness that do not respond to the glasses. David Pogue tried them and they didn’t help his severe Protanopia. (He just found some more expensive glasses that work for him.) I’ve got another type of red-green colorblindness, Deuteranopia, and the glasses work perfectly for me and many people, as you’ll see in the enthusiastic reviews on Amazon.

The Ishihara test is the standard test for colorblindness – circles with packed blobs that form numbers that are visible to people with normal vision. I scored 0 out of 8 on this online version of the Ishihara test.

I put on the glasses for the first time in front of the computer and immediately scored 8 out of 8 on the test.

Since then I’ve been walking outside – the glasses are better in bright light – and seeing a different world. Reds are completely different than I thought, lighter and brighter, not the dark brownish tint that I normally see. Red leaves pop out on the trees as they change color. The unripe blackberries jump out at me. Fire trucks and red cars look cool.

It took me a while to realize that an even more profound change was happening to the greens. See the difference in the color of the grass and bushes in the background of the above picture? Words can’t express how it feels to look at trees, put the glasses on, see the leaves change to a completely different color, barely resembling the uncorrected view – while other colors are unchanged!

I walk by an apple orchard with Gravenstein apples. Without the glasses, I see the trees. When I put on the glasses, the trees are suddenly covered with apples, a whole hillside of trees loaded with fruit that I can’t see unaided. But these aren’t red apples! The apples don’t change color. The trees change color and the apples become visible against them.

It’s hard to describe. Greens and reds are richer, yes, but they’re also shifting hues in ways that make them more varied and more interesting, bringing out contrasts that I had no idea were there. It’s emotional and at times breathtaking. I may not wear them all the time forever but I’m learning lessons that will help me understand my unaided vision.

The glasses aren’t designed for full-time use but I’ve found them comfortable to wear for several hours, with no distortion or tiring. The purple tinting is a bit noticeable in low light or under artificial lights and disappears in bright light.

This article by one of the lens developers has a wealth of information about the science of the lenses and the strengths and limitations of the color correction. “The Oxy-Iso filter amplifies the red-green discriminations color-deficients are lacking, but does so at the expense of their intact color perception and yellow-blue discrimination. In a sense, the Oxy-Iso spreads the color confusion more evenly around the color-wheel, rather than having it concentrated only on red-green.” Personally I haven’t noticed any diminution of yellows and blues.

This Popular Science article has more background information, and is typical of the enthusiastic coverage that the lenses got earlier this year when the word got out. Now the company is reportedly talking to Oakley and Ray-Ban to put the technology into sunglasses and designer frames.

You don’t have to wait. The glasses can be purchased from Amazon for $300.

If those two photos look the same to you, start doing some research on the Oxy-Iso glasses! The world is colorful in a way that you might be able to see for the first time.