Dell and Lenovo have released details of new business laptops that take advantage of the latest advances in Intel’s Haswell chipsets to increase speed, reduce weight, and extend battery life. Expect them to be shipping in the next few weeks, along with more new models from other manufacturers.

Dell is revamping its entire Latitude lineup, with a new flagship Latitude 7000 Series plus lower-end Latitude 5000 Series and Latitude 3000 Series laptops. All of them can be configured with touchscreens, although the touchscreens are optional on most models to make the price appear to be lower. You will get a touchscreen on your next laptop, right?

The Latitude 7000 Series is the most interesting, with 12” and 14” screens under stylish-looking carbon fiber lids. Dell claims 8 1/2 hours of battery life. There are ports galore – 3 USB 3.0 ports, full-sized Ethernet port, and HDMI. They’re not the thinnest or lightest laptops on the market (3 pounds for the 12” model, 3 1/2 pounds for the 14” model), but they will seem like feathers if you are replacing a clunky six-pound behemoth.

One of the advantages of the Latitude lineup is its continuity over the years for peripherals. The new Latitudes are compatible with older E-series docking stations, for example. There’s an interesting new wireless dock, also, which theoretically permits the laptop to display video, stream audio, and connect to peripherals when it arrives within range, no cables required.

Latitude laptops have always been reasonably priced. They’re built to be sturdy and long-lasting, so you pay more than for low-end “bargains” at Best Buy, but they’re also not considered premium models with prices to match. Nonetheless, expect to see a high price on a Dell Series 7000 if it’s configured the way you want it, with a decent processor, touchscreen, and a fast SSD for storage. Be careful! Although the Series 7000 laptops appear to be shipping, the only models available have underpowered Core i3 processors and s-l-o-o-o-o-w 5400RPM hard drives. We don’t want to buy these until there are more options to configure them.

There’s more information and videos about the new Dell Latitudes here. Click here to see what models are currently available. 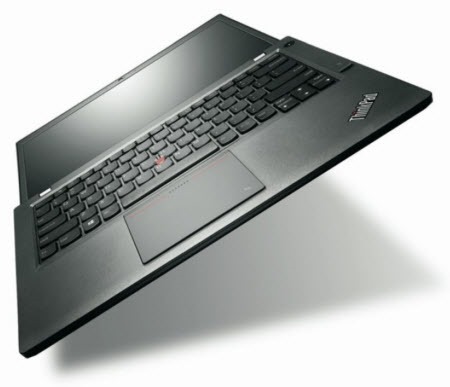 At the same time, Lenovo announced several new Thinkpads with the usual Thinkpad build quality but many improvements over current models. The most interesting new feature is “Power Bridge”: Lenovo has built an internal battery that keeps the laptop running while you swap the removable battery. Invest in a spare battery and keep it charged and you’ll never run out of juice. (Lenovo claims an eye-popping 17 hours of battery life for some of the new Thinkpads, which makes them impressive even after discounting for exaggeration.)

As always, Lenovo suffers from a dizzying array of models. It’s difficult to keep them straight! Give Lenovo credit for creativity but, well, it has something like sixty laptop models, each of which can be configured with a multitude of options. Here’s the acronym soup from just this announcement: The T440S is an upgrade to the T431S and has a higher screen resolution than the T440, while the X240 is an upgrade to the X230, and the S440 and S550 are different in some ways that are hard to tell but it doesn’t matter because they’ll only be sold in Europe, unless I misunderstood that part. Yeah, right, sure.

Lenovo’s Thinkpads are the business laptop of choice in 2013. You won’t go wrong if you get one. Just be prepared for a difficult time trying to make an informed choice at the Lenovo web site. (Tip: start with the T440S when it becomes available if you can’t afford the Thinkpad X1 Carbon Touch.)

Here’s a good article about the new Thinkpad models. Click here to go shopping, although the new models aren’t showing up quite yet.

There will be many more laptops announced or released between now and Thanksgiving, along with upgraded Microsoft Surface tablets, Nokia tablets, and a flurry of Android devices, not to mention new Nokia phones and iPhones. Oh, and you’re not finished when you leave the office, with the XBox One and PlayStation 4 dueling for space in your living room. Expect to spend some technology money this fall!