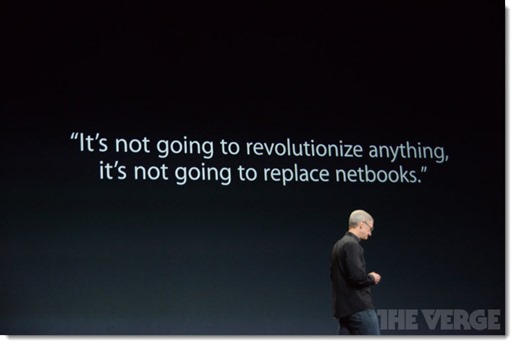 Macgasm: “Who Are The Haters Quoted In Apple’s Keynote Yesterday?”

Apple CEO Tim Cook gave a shout-out to Bruceb News on Tuesday during the press event where he unveiled the iPad Air and iPad Mini with retina display.

For many years, Apple’s press conferences have been closely covered by the media, tech web sites and bloggers. Steve Jobs would famously appear in his black turtleneck to reveal the latest Apple devices to an adoring crowd. Tim Cook has taken over the role and yesterday’s event in San Francisco was the occasion to introduce the 2013 upgrades to the iPad and iPad Mini. As usual, there were webcasts of the streaming video and live blogs with shots of every slide and running commentary on every word. You’ll see loving articles about the Apple event in every news feed on Wednesday morning.

After discussing the MacBook Pro, Mr. Cook began talking about the iPad, a “revolutionary and magical device.” He reminisced about the doubters when the iPad was first introduced in early 2010. With the above slide in the background, he said, “Others didn’t think it could compete with a netbook. Who remembers netbooks?”

Although I don’t recognize his email address on the mailing list, I can only assume that Mr. Cook has been a long-time subscriber to Bruceb News. It’s a distinct pleasure that he announced his admiration to the world, although I can’t help but feel a little bad that he forgot to put the URL on the slide. Also, he never calls to invite me to lunch. Still, a lovely gesture to give me the recognition.

It’s true. I didn’t foresee the success of the iPad. I don’t want to quibble but it’s worth noting that Mr. Cook did not quote the entire sentence from the original article, which adds a teensy bit of nuance:

In my defense, a lot of other people underestimated the iPad when it was launched. Examples: David Coursey, PC World (“Has Steve Jobs’ fabled reality distortion field finally failed its creator?”); Bill Gates (“It’s a nice reader, but there’s nothing on the iPad I look at and say, ‘Oh, I wish Microsoft had done it.’"); Don Resinger, eWeek (“Thanks to Apple, a device that is not revolutionary in any way has reached a level of hype that no other product on the market can muster”).

In hindsight the success of the iPad feels preordained, but there were good reasons to doubt at the time. Microsoft had been trying to market tablets for eight years before the iPad appeared, with no success. It was hard to imagine that Apple would be successful with a device that seemed to be more limited than a netbook but would be sold at a far higher price.

In 2010, Apple uncovered a niche for a product that people didn’t realize they wanted. Now, three years later, it’s just as obvious that “it might not require Apple’s magic touch to make a satisfying device that fills that niche. Other manufacturers will bring out tablets running Windows or Android or Chrome OS, any of which might be sufficient.” That’s a quote from the same Bruceb News article in 2010, by the way. Perhaps a better prediction, since Apple’s press conference was held on the same day that Microsoft began shipping the Surface 2 and Nokia announced the Lumia 2520, two Windows tablets that are sleek and well engineered. Not to mention that Android tablets are outselling iPads by a two to one margin.

I’m much less confident now about predicting the future. What will the next disruptive device be? Apple and Google have had little success in their efforts to create a niche in the living room for a TV-connected device; Microsoft is trying again with the XBox One in a few weeks. Will one of them seem like a preordained success in hindsight? Samsung released a clunky watch a few weeks ago to display text messages and alerts on your wrist; Apple is expected to release a more elegant version next year. Will the Apple watch be the right  product to open up the market for wearable computing?

It’s safe to predict that Apple will sell 43 trillion of the iPad Air and iPad Mini with retina display. They’re engineering marvels. But my thanks to Mr. Cook for the reminder: more nuance, fewer sweeping pronouncements.