It’s Not The Device, It’s The Ecosystem 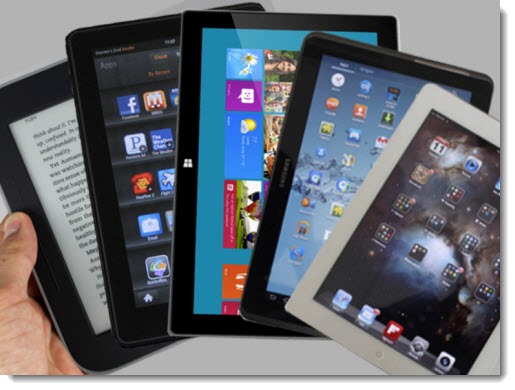 The holiday shopping season is nearly here. You’re faced with quite a selection of tablets and no obvious way to choose one over another.

–  The level of engineering is so high that almost all of the new tablets are gorgeous and strong and light, with beautiful high-resolution displays.

–  Battery life has been extended far beyond what was possible even a couple of years ago.

–  You can find a tablet in any size from six to twelve inches (and even beyond, if you stretch the definition to include hybrid laptops with detachable keyboards).

–  Prices are all over the place, from the cheapest Amazon and Android tablets all the way up to Apple’s expensive iPads.

–  The reviews compare the specs and point out trivial differences that simply don’t matter in the real world. You should not make decisions based on whether the display on one tablet has a few more pixels per inch than another one.

How do you choose?

Repeat this mantra: It’s not the device, it’s the ecosystem.

There are four ecosystems: Apple, Google, Microsoft and Amazon. Every device on the market today fits into one of those walled gardens – every phone, every tablet, every laptop, every computer.

Each company wants you to choose their device because if you do, you are more likely to buy your next device in the same ecosystem. If they can lock you into their ecosystem, you will buy their devices in the future; you will buy apps from their store; and you will see their advertising.

By this time you’re already invested in one or more of the ecosystems, whether you realize it or not. Your next technology purchase can leverage that investment and take advantage of the synergy of having multiple devices and services that work together with each other.

Let’s try to make this less abstract. These are some of the specific advantages of having a phone and a tablet from the same ecosystem – an iPhone and iPad, an Android phone and Android tablet, a Windows phone and Windows tablet:

–  The interface will be consistent and familiar for starting programs, adjusting settings, searching, and returning to the home screen.

–  Apps purchased from the store will likely be able to be installed on all of the devices in the ecosystem tied to the same account, but frequently not on devices in another ecosystem. If you have an iPad and an Android phone, you can wind up paying twice for the same app. That’s not 100% consistent but it’s true more often than not.

–  Purchases of music, movies, and TV shows will easily be available on all devices in the same ecosystem, but frequently not available on another platform. Again, there are sometimes some workarounds and it’s not completely consistent, but it’s often true. Examples: If you buy music and video from Apple, you will not be able to get to the same content from an Android or Windows tablet. Amazon Prime video can be viewed on a Kindle DX and on an iPad but not on an Android or Windows tablet.

–  Photos taken on the phone will be synced through the cloud to a tablet in the same ecosystem. It’s possible to cross over from one garden to another – take a picture on an iPhone and sync the pictures to an Android tablet, for example – but it will not be as natural as turning on iCloud with a single switch.

–  The company running the ecosystem will learn about you and begin to tailor services specifically for you. If you stay in Google’s world with an Android phone and tablet and use Gmail and Google Calendar and the rest, Google will know where you are and what you’re looking up and what’s on your schedule. Creepy? Sure, but after a while Google Now will start popping up to give you information you want before you ask for it. The other companies are also trying to provide magical services based on what they know about you. The more they know, the better the magic.

With that in mind, the fall tablet lineup becomes a little easier to understand. In the next article I’ll give you some specific thoughts about which tablet you should put under your Xmas tree.