Looking Forward: Computing Without A Computer 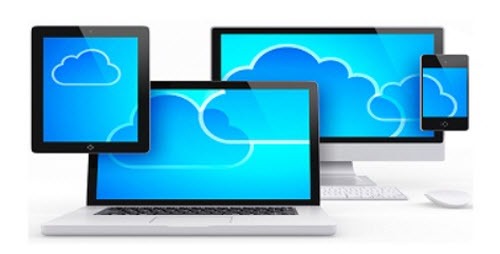 Previously:
Looking Forward: Why You Might Never Buy Another Computer

This is one possible future for small business computing.

WHAT IT LOOKS LIKE TO COMPUTE WITHOUT A COMPUTER

You sit down at a monitor and keyboard. There’s no computer in sight but there’s a login prompt onscreen. Log in with your user ID and password and your Windows desktop appears. Open up Explorer and browse to your files. Use Outlook and Word and your company’s line-of-business programs. Browse the Internet with your preferred browser and your bookmarks.

This doesn’t have to be done at your desk in your cubicle. Any monitor will do. If you have a desk, its purpose is to hold pictures of your kids, because you can pull up your programs from any monitor in the office – or any monitor outside the office, for that matter.

Got to run? Disconnect and walk away. A few minutes later, pull out your iPad, tap on an app and put in your credentials and there’s your Windows desktop, exactly the way you left it – same programs running, same windows open, same files. The Start button is in the lower left, right where it should be, except, well, it’s remarkable for it to be there because it’s an iPad. You can use your line-of-business programs. The best programs have been rewritten for better displays on different-sized screens and they’re finger-friendly.

You’re on the road. The laptop in your briefcase bears a passing resemblance to today’s laptop but most of the weight and thickness has been shaved away. The display is wafer-thin and the keyboard is only thick enough to give the keys some room to travel and perhaps provide room for a USB port. When you turn on the power, you don’t see the familiar Windows logo; there’s no hard drive and no copy of Windows. About all it does is display a log-in prompt. Yet when you put in your user ID and password, there’s your Windows world, just the way you see it on your laptop today. In fact, it’s more like your Windows world than today, because all of these desktops are the same. They’re not similar, there’s no syncing going on – they’re literally all the same desktop, appearing on whatever screen happens to be nearby.

This is one possible future of hosted desktops. There are acronyms and buzzwords for the technology making it work behind the scenes – thin client computing, VDI (Virtual Desktop Infrastructure), RDP (Remote Desktop Protocol), DAAS (Desktop As A Service), and more.

You already know how the trick is done. Many of you have used LogMeIn, which lets you connect to a distant computer and see its desktop as if you’re sitting in front of it. If you’re in a business run by Small Business Server or Server Essentials, you may be familiar with the server portal that lets you connect to your office computer remotely. There are many other ways to set up remote connections – GoToMyPC, VNC, Remote Desktop, TeamViewer. My clients are accustomed to my remote connections for support using LogMeIn Rescue or the viewer built into the Bruceb Remote Management agent.

If you start a session with LogMeIn or Remote Desktop or one of the others and run it full-screen, all you see is the remote computer. Your local computer drops out of sight. All that’s being sent to the device in front of you is the screen display from the remote computer; all the computing is being done at the remote end. If both ends have a good Internet connection, the remote screen responds at the same speed as your local device.

All of the currently available solutions for remote access have two requirements: you have to be using a computer or mobile device to initiate the connection; and there has to be a computer at the other end that you’re controlling. Both of those will change in interesting ways.

Frequently the computer at the other end is a physical computer, usually the one at your desk at the office. Many small businesses have a desktop computer or two set aside in the corner that are used only for remote connections. increasingly, though, businesses are setting up virtualized computers, based on technology that is long-established and improving fast.

A virtual PC believes it is a real computer. It believes it has a metal box, a hard drive, a processor, memory, a network connection, and a video card. It runs Windows and has programs installed on it. When you connect to a virtual PC in a remote session, it is indistinguishable from a computer in a metal box.

For that computer, though, there’s no box. The virtual PC is a program on a server running specialized software – usually Microsoft Hyper-V or VMWare – whose job it is to create virtual PCs. A single server running Hyper-V can host dozens of virtual servers and virtual desktops.

Larger businesses set up virtual servers and virtual desktops on the business servers in the closet. Each virtual server and virtual desktop requires many of the same things as a metal box: IT has to spend time to set it up, each one needs a license for Windows, and each one needs maintenance for updates, security and backups. In a way, each one is running on physical hard drives on the premises, but the hard drives are attached to the server hosting the virtual PCs in Hyper-V or VMWare.

That’s enough for you to understand the first big concept: a Windows PC can be created as a program running on a specialized server. The only way to access it is through a remote connection using Remote Desktop or LogMeIn or something like them. When you control it remotely, it acts exactly like a physical computer.

MOVING VIRTUAL DESKTOPS TO THE CLOUD

Imagine that a big company decides to run Hyper-V or VMWare on servers in the cloud and create a virtual PC for you to use. You connect to it using Remote Desktop or LogMeIn or some other app and its desktop fills your screen. You can install programs and save files. It responds just as quickly as any other computer.

There are some advantages. You’ve spent less time setting up the virtual PC. The big company is responsible for installing updates to Windows. It has a sophisticated backup strategy that lets you restore your computer to an earlier time in its entirety with a few clicks. Virus and malware threats are minimized because you can roll back so easily.

The leap of faith is to imagine that you trust that virtual PC so much that it becomes your primary place to work. Assume that you become satisfied about security and reliability issues. You start your day by clicking the icon to start the remote session and you spend your day in that virtual desktop.

Once that happens, you’ve begun the process of divorcing yourself from the computer at your desk, because that virtual PC can be accessed from any device with an Internet connection. There are apps today on every platform to begin a remote session with Remote Desktop or LogMein or TeamViewer or the others. It’s already possible to bring up a Windows desktop on an iPad or Android tablet or Windows RT tablet. It’s not widely done because it’s not easy to set up and the advantages are not yet clear, but the technology already exists. If the virtual desktop runs in the cloud and a big company simplifies the setup, you will cross the line into science fiction.

You see, it takes almost nothing to create a Remote Desktop session. It does not require a full version of Windows. It doesn’t even require the computing power of an iPad. It can be done today with a little tiny device that can fit into a wall outlet. Connect a monitor and keyboard/mouse and you have your thin client at almost no cost. Devices like that are scarce now because the technology for virtual desktops has to advance to address security, reliability, and ease of setup. There is no limit to what developers will create to start remote sessions if virtual desktops become widely used. Anything with a screen, a keyboard, and an ounce or two of electronics will be able to start the remote session.

I think we’re close to the tipping point. The technology for virtualizing computers has been developing for years. It is mature and well-understood. Hosted servers are starting to be widely used. Until now, the same technology has not been widely adopted for desktop computers, but many of the barriers will be crumbling in 2014.

–  We are closer to believing that our Internet connections will always be available, and the speed of our connections is now more likely to be sufficient for a good experience.

–  The remote desktop experience is reaching a point where it is indistinguishable from the experience at a local computer. Programs, audio and video, and even games can now be streamed at full speed over a remote connection.

–  We are getting over our first flush of paranoia at the thought of putting data in the cloud. There are many conversations to have about security and privacy but it is becoming more likely that those conversations will be based on rational concerns instead of irrational fear.

SHOULD YOU DELAY BEFORE BUYING ANOTHER COMPUTER?

Go shopping! This isn’t happening yet. There are huge barriers that may prevent this from becoming any more than a fringe business. At the threshold, many things remain to be seen about security, stability, privacy, redundancy, and availability.

Step back and you can see that this has the potential to be a hugely disruptive transition – and disruption does not happen easily or quickly. This could be the final death blow for PC manufacturers and it will put even more IT staff out of work. Any business with more than a handful of people has an investment in its existing infrastructure of servers, computers and programs and will not surrender it easily.

Yet, as we’ll see in the next article, forces are mobilizing right now to make this a reality. The technology is ready. What remains is packaging and consumer awareness, and that can drive change quickly if the pieces fit together at the right time.

Want to know how quickly the entire technology world can be transformed? The transition to mobile devices only started six years ago. The iPhone was introduced in June 2007. The PC industry has been turned upside down (and the world of desktop computers has been decimated) overnight.

The road to virtual desktops will be bumpy but in hindsight we might feel as if the time went very quickly.

In the Afterword, I’ll tell you about two of the companies that are working on making hosted desktops into a commodity that you can set up with a few clicks. They’re closer to it than you realize!