Skydrive And Smart Files In Windows 8.1

When you buy a new computer with Windows 8.1 or upgrade a Windows 8 computer, Skydrive gains some subtle and interesting new features. Microsoft has engineered Skydrive so it is even more deeply integrated into the operating system, making it simpler to set up and start using it. More interesting, although largely invisible to you, Microsoft has developed a way to sync your files that uses less disk space, which is important for us when we use Skydrive with tablets and notebooks that have limited amounts of storage.

The improvements to Skydrive are arguably one of the best things about Windows 8.1.

Skydrive is Microsoft’s cloud service that lets you store files online, linked to your Microsoft account. The files are synced to any computer linked to the same account (PC or Mac), as well as being accessible in a web browser and on smartphones and tablets (Skydrive apps are available for iPhones/iPad, Android, and Windows Phone).

This is the same concept that lies behind Dropbox. Inexplicably, though, Dropbox remains mired in a slump. Skydrive has matured into a service that is modern and beautiful online as well as reliable, with a multitude of new features. Dropbox looks stale by comparison (and offers much smaller amounts of free storage, too).

In the last year Skydrive has improved to the point that you should be using it as the location for all of your personal files, instead of your desktop or the Documents and Pictures folders on your local hard drive. It’s the default file storage location for Office 2013 and now it’s completely seamless to use it in Windows 8.1.

SKYDRIVE ON THE DESKTOP

The desktop app disappears in Windows 8.1. Nothing has to be installed or configured. When you log into Windows 8.1 with a Microsoft account, Skydrive simply appears in Explorer alongside your document and picture folders. If you’ve previously used Skydrive on another computer or device, all of your files will immediately be synced to the Skydrive folders on your Windows 8.1 computer. There’s no icon for Skydrive in the lower right corner. It just works.

Although I’m only going to talk about the desktop here, it’s worth noting that Windows 8.1 has a full-featured Metro app for working with Skydrive files in the modern full-screen UI – particularly good for viewing photos. Skydrive is also used behind the scenes to sync all settings in Windows 8.1 (a lot of your settings are synced by Windows 8.1 through Skydrive), as well as being used to sync OneNote notebooks.

Microsoft gives 7Gb of storage space to every Skydrive user with a free Microsoft account. Legacy users were given 25Gb when Skydrive was updated in 2012, and additional space can be purchased cheaply. You don’t have to pick and choose. You can use Skydrive for all of your documents and pictures, even large photo libraries. (Music and video involve large files that can add up quickly, so some extra caution applies if you have big music or video collections.)

Paradoxically, our local hard drives are getting smaller. Laptops with solid state drives are fast but typically have only 128Gb of space, not terabytes. Your tablet probably only has 32Gb of space total, and far less available to be used for storing files.

If Skydrive synced the entire contents of your online folders to that tablet or laptop, there’s a good chance it would overwhelm the available storage space. On the other hand, if Microsoft simply turned off the syncing by default and left you to retrieve files manually – more or less what Dropbox does – it would be missing some of the feeling of being completely natural, an important goal for Microsoft.

The engineers came up with smart files – placeholders with special characteristics that make them work like the original files while taking up almost no space.

When you set up Windows 8.1 and look in the Skydrive folder, you will see all of your files, exactly the way they appear on your other computers. You can rename them, copy them, and move them. They’re fully indexed – you can search them. If they’re photos, you can browse through high-resolution thumbnails.

But the files aren’t really there. You’re looking at placeholders.

It works amazingly well. Your perception is that all your files are with you on every device, but they’re using a fraction of the file space that the full copies of the files would require.

There are some smart things done to make some files available instantly. If you’ve ever opened or edited a file on a device, a local copy of that file will always be available, online or offline, for example.

This Microsoft article has more details on how Skydrive works in Windows 8.1. This article has some additional information about smart files, and there are some technical details in this article.

The obvious question, though, is how you get access to your files when you’re offline. It’s getting to be a bit paranoid to worry about it because we are rarely offline anywhere other than flights. Still, it’s natural to want to have the extra copy of your files if you have space for them, or if you know you’ll be offline and need to be able to work.

You can right-click on any Skydrive folder and click on “Make available offline.” The folder will immediately be synced to your device in its entirety. That’s all it takes for offline access to any folder in Skydrive – Documents, Pictures, or any subfolder. You can right-click on the Skydrive folder in the left column and immediately have an offline copy of everything in Skydrive, no exceptions. 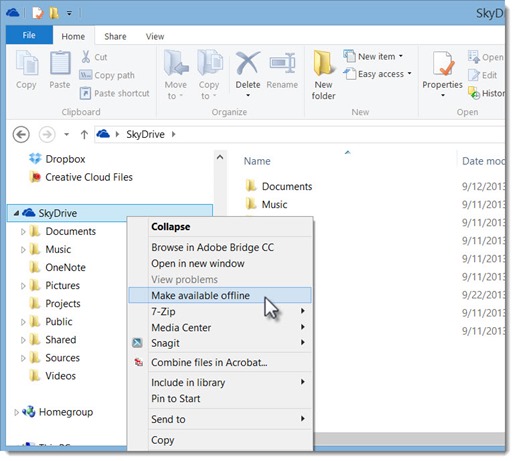 It’s possible to mark folders for offline access from the Metro interface as well.

Microsoft has gone a long way to make Skydrive a tempting way to save all your files. You have access to a Recycle Bin on the web site for files that are deleted from a Skydrive folder; the sharing controls (accessed from the web site, although you can get there by right-clicking on a file or folder in Explorer) are intuitive and easy to use; and you can access previous versions of files from the web site.

You might decide there are a couple of shortcomings.

—  For better or worse, there is no visual feedback whatsoever in Windows 8.1 about what Skydrive is doing – no progress indicator, no icon reflecting a file’s online or offline status.

—  Folders shared with you by others cannot be made available offline. (This is asked for so frequently that I can’t imagine it won’t be added soon.)

—  At some point you’ll find yourself on a flight looking for a file that you didn’t make available offline and you’ll grumble that this was a stupid way to set it up. (You’ll get over it after you calm down.)

At some point Microsoft will announce a new name for Skydrive, after a settlement with EU company BSkyB over the name “Sky.” I’m holding my breath that Microsoft will choose a new name wisely – not a safe bet with Microsoft by any means. (In my dreams it’s something like “Xdrive” but the company is fully capable of “Microsoft Cloud Storage 2013 Home And Student Edition.”) By any name, Skydrive is a mature and valuable service that can benefit just about everyone.