The recent update to LastPass version 3 brought some new features and a refreshed look to the program, but it also brought a crop of new bugs and problems. There is an update to version 3.0.10 that might help Internet Explorer users, but you have to install it manually – as near as I can tell, it’s not being pushed out automatically yet.

You can see which version you have by clicking on the LastPass icon in Internet Explorer, then clicking on Tools / About. If you don’t have the latest version, click here to download and install LastPass 3.0.10.

As our world becomes more fragmented, there are fewer bits of advice that apply to everyone. To be clear, then, this is suggested for people running Internet Explorer 11 in Windows 7 or Windows 8. If you use Chrome, there may be an update that fixes problems for you but the Chrome numbering system is different; as of December 19, LastPass 3.0.19 is the latest version.

After upgrading to LastPass 3.0 I noticed two issues with Internet Explorer. 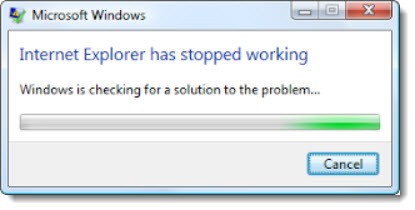 —  Internet Explorer would almost always display a crash message when it was closed. Clicking to close the last IE window would lead to a harmless but distracting message: “Internet Explorer has stopped working.” It only took a moment to click the Cancel button but that gets old pretty quickly.

—  Within a second or two after loading a web page, the Internet Explorer window would lose the focus and the cursor would get the “working in background” circle. If I was typing on the page – to fill in a form, say – losing the focus meant that I’d look up and discover that half the letters I typed had not made it onto the page. I’d have to click to return the focus to the window. That turns out to be irritating after the 60th or 70th time it happens.

Both of those issues have been reduced or fixed in version 3.0.10. At least it helps for most people – the LastPass forums are full of people complaining about various problems but that’s true of any program these days (and usually well-deserved, sadly enough). Give it a try! Pretty clearly the LastPass developers are squashing bugs as quickly as they can.