Windows 8 users who set Google Chrome as their default Internet browser are caught by surprise when it opens in a fullscreen Metro environment instead of running on the familiar Windows desktop. I’ll explain how that works below.

Today Google released Chrome version 32, which makes their strategy clearer. The new version makes the Metro version of Chrome a vehicle for running their faux operating system Chrome OS inside of Windows 8 – a Trojan horse aimed at taking down Windows from inside.

It’s naked warfare now. Microsoft, Google and Apple are sitting inside their walled gardens firing cannons at each other. This seemingly modest update is a major escalation in the war. Our role as consumers is to serve the bidding of the giant companies and deal with their whims, sometimes to our benefit and sometimes as collateral damage.

How Google Chrome works in Windows 8

Sorry if this seems complicated. War is not pretty.

—  You can switch back to familiar Google Chrome running in a window on the traditional desktop by clicking on the Tools menu (the three bars in the upper right) and clicking on Relaunch Chrome on the desktop. 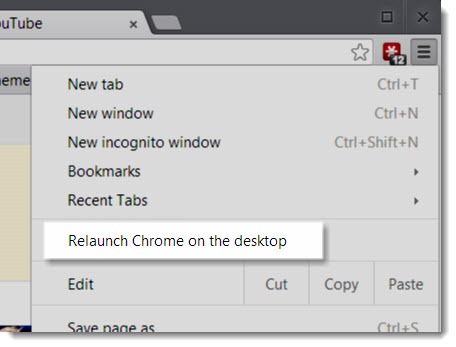 —  Chrome remembers the last mode that you used and continues to use it until you change it. If you haven’t seen the fullscreen Metro mode, you’ve probably been using Chrome on the desktop for a while and it has remembered your choice.

—  If you are using Chrome on the desktop and you want to look at the Metro mode, you can click on the Tools menu and click on Relaunch Chrome in Windows 8 mode. 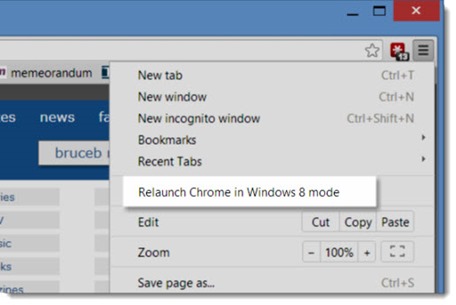 The new version of Chrome released today, version 32, will be installed automatically for all Chrome users on Windows 8. When it launches the Metro version of Chrome, it is more than just the Chrome browser. It is a version of Chrome OS, the operating system built by Google that until now has only been available on Chromebooks.

This is what it looks like in Windows 8, which is almost identical to the way it looks on a Chromebook. 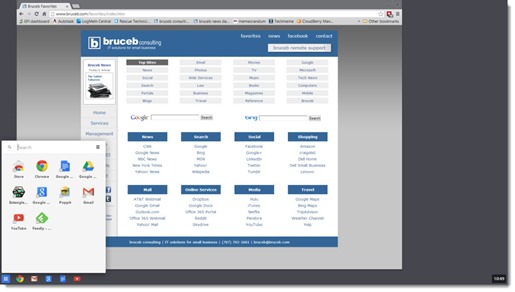 Looks innocent enough, right? Mostly it’s just the Chrome browser. The icons at the bottom and the menu that’s popped up in that screen shot are new, and they’re more than they appear.

I’ll try to explain Chrome OS in a few sentences, which won’t do it justice but you’ll get the idea.

Chrome OS is not Android. Google has taken over the world of mobile devices with Android, which has an overwhelming market share on tablets and phones worldwide.

Separately, Google has been working on Chrome OS, which takes the Chrome browser and adds a taskbar and a selection of apps curated by Google. Some of them run inside the Chrome browser; others run as more or less independent little programs.

The entire effort is completely independent of Windows. Until now, Chrome OS was only visible on Chromebooks, laptops specially designed to run Chrome OS. Almost all of those laptops are dirt cheap, typically under three hundred dollars. (The exception is Google’s expensive Chromebook Pixel, released a year ago with fanfare, completely pointless, and never heard from again.)

Here’s what you have to understand:

—  Chromebooks only operate online. They are useless offline.

—  Chrome OS runs the Chrome browser and a very small number of apps that do almost nothing interesting.

—  A Chromebook might be useful if you are firmly embedded in Google’s ecosystem, so much so that you don’t need to do anything outside the Google world. You use Gmail and your files are stored in Google Docs and your spare time is spent on YouTube, and that’s about all you do with a computer.

—  A Chromebook is almost perfectly useless for everyone else.

But there are two more things to understand that make it a little easier to see the competitive landscape.

(1) Google will make Chrome OS more useful. Over time it will work out methods to use its apps offline. It will attract developers and the apps will become more compelling. It will never have all the features of Windows and it will never run as many programs, but it will become good enough.

(2) People are buying Chromebooks anyway. Chromebooks were two of the best three selling laptops at Amazon this Christmas season. There was a widely disseminated report at the end of the year that Chromebooks were responsible for more than 20% of all laptop sales in 2013. Tech bloggers churned out hundreds of articles about that for a day or so, the attention span of today’s news cycle. (On closer examination, the report didn’t actually say that. It was reporting on a very narrow, not very interesting market segment: sub-$300 laptops sold in the US in a particular business-to-business channel. Still, there’s no question that sales of Chromebooks are increasing steadily.)

Now you should be able to see the significance of this new release of Chrome for Windows. If Chrome OS can be used inside of Windows, it gives the huge Windows audience a chance to become familiar with it and begin to use it every day. Assume the apps get better and perhaps you begin to rely on them. Maybe in time you discover that you’re getting all your work done in the Google ecosystem and rarely leaving to use Windows 8 programs at all.

Google is thinking long-term. If their plans come to fruition, more and more people will decide that Chrome OS is sufficient and they don’t need Windows at all on their next computer. Sound unlikely? Look at those sales numbers again! Chromebooks are selling while they’re useless. Imagine what might happen when Google improves Chrome OS!

This cuts both ways. There are dirt-cheap Windows laptops, too. Microsoft can argue that you should buy a Windows laptop because you’ll get Chrome OS, after all, and you’ll also be able to run Windows programs, a big advantage over Chromebooks. Google will respond that Windows sucks and Chromebooks are simpler and safer. Microsoft will get red in the face and yell back that – well, you get the idea.

It’s war for control of your computer, just like the battle for the mobile device market. The stakes are high. Expect Google to work on drawing attention to Chrome OS this year, and using its Trojan horse version in Windows 8 as the way for you to sample it.

I hope you didn’t think anything was going to slow down in 2014.