The Joy Of Ubiquiti UniFi Wireless 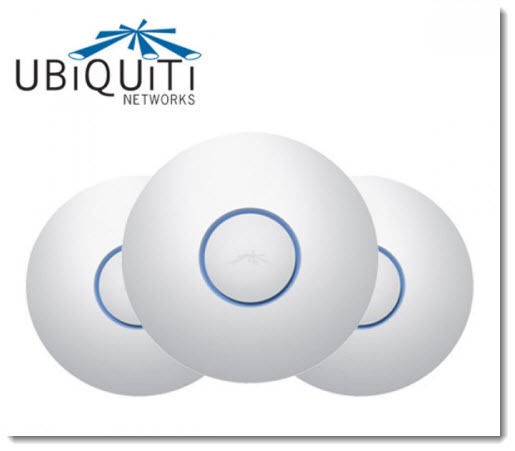 UniFi wireless access points provide high performance, extended range, and a well-designed control panel. You can get reliable wireless coverage for large areas at prices that small businesses can afford.

You cannot imagine how satisfying it is to write that.

There has been a sharp divide for years in wireless networks. Setting up true business-class wireless has required the services of expensive specialists and high-end equipment with sky-high price tags. The only alternative has been consumer-grade routers and wireless access points from Netgear, Linksys, D-Link, and the like, which work – well, they work fine but it’s nothing like a great experience. Almost everyone gets used to power-cycling the router when the wireless won’t connect, or discovering sadly that there’s no easy way to extend the range to cover areas where the signal drops off.

My cynicism about wireless has been built up from years of poor experiences.

Ubiquiti Networks bills its equipment as “enterprise wireless,” but it is inexpensive and simple enough that small businesses can drop it into place and improve their wireless experience right away. I ran across it almost by accident; perhaps the world has changed and there are lots of choices just like it but UniFi wireless is the one that I know about today.

First, a bit of background. You almost certainly have a router at your home or business. It’s the device that takes the Internet connection and makes it available to multiple computers. The rule of thumb on small networks is: there can only be one router on a network.

[Geeky detail: technically, there can only be one DHCP server on a small network. Routers can be configured not to fight with each other. If you knew that and you’re bursting to tell me about all the exceptions to my blanket statement, go over in the corner for now and treasure that feeling of superiority and we’ll talk after class.]

In your mind, imagine that the job of creating a wireless network is a separate task from the job of being a router.

For many of you, the job of creating a wireless network is done by the router. It’s all part of the same box – but remember, it’s a separate task. The router is doing double-duty. It’s a “wireless router.” Very common. You can tell the router to turn the wireless on and off with a checkmark in the router’s control panel.

Although it’s become rare, there are routers that do not include wireless. Comcast Business Internet service, for example, is set up with a device that is only a router, the Comcast Business Gateway (a relabeled box from SMB or Netgear).

A wireless access point (WAP) is a separate box that connects to the network with a network cable and broadcasts a wireless signal. That’s necessary when the router does not include wireless, or when you want to extend coverage to areas beyond the reach of the wireless router. If you want to add to your wireless coverage, you don’t buy a second router. (Remember: only one router per network.) Instead, you buy a wireless access point, which traditionally has been a consumer-grade device from Netgear or Linksys that looks just like the router.

There are two problems with wireless routers and consumer-grade wireless access points.

One problem is that they tend not to play well with each other when there’s more than one wireless access point. Theoretically it’s possible to set up the same wireless network name and move from one end of the building to the other and stay connected, but in reality that almost always falls down. If there are cables running to each wireless access point, you wind up with two or three separate wireless networks, and it’s up to you to disconnect manually from one and join the other when you move from place to place. Or maybe you’re drawn by the allure of a repeater that connects one wireless access point to another without a wire, until you discover that speeds plummet at the far end and connections are flaky.

The other problem is that  consumer-grade routers and WAPs are kind of cruddy. Connections are unreliable. They have to be power-cycled too often. (“Bruce, I can’t connect to the wireless network.” “Have you tried turning it off and on again?” How I wish it was just a punch line instead of your daily reality.) They fail after a year or two, although seldom in obvious ways.

Along comes UniFi with the hope of a better experience.

A UniFi wireless access point is a flat white disk about eight inches across. It can sit flat on a high shelf but it comes with wall mounts as well as ceiling mounts for professional setup with cables running above drop ceilings. There are two models – the regular access point for eighty dollars with a range of 400 feet, and the “long range” model for a hundred dollars with a range of 600 feet. The range is not to be taken literally, of course – as with all wireless, it depends on the location of the access point, the number of intervening walls, the construction materials in the building, and a healthy dose of good or bad luck. The important thing is that twenty dollars extra for the “long range” model gets a more powerful signal.

The UniFi equipment uses Power Over Ethernet (POE) to avoid the need for an electrical cord between the wall outlet and the device on the wall. Each one comes with an adapter that takes the power from the wall outlet and sends it through a single Ethernet cable that is the only wire connected to the access point. That makes it far easier to locate the UniFi access points on a high shelf or high on the wall where they will generate a far-reaching wireless network.

There are UniFi models for outdoor use and a Pro model that adds support for the latest wireless network protocol, 802.11ac, along with some additional setup complexity. I’ve only tested the plain vanilla, inexpensive indoor models.

The access points are set up and controlled by software that is installed on one of the computers in the network. The UniFi Controller requires Java, unfortunately, but makes up for that with fast performance and admirable simplicity for anyone reasonably well-versed in small business networking.

By default, the UniFi Controller software sets up a single wireless network that is broadcast by all the wireless access points on the network – and it arranges it so the WAPs do not conflict with each other. I have two UniFi WAPs in my house; my laptop and tablets join whichever one is closer when they wake up. (I found out during testing that I didn’t need two WAPs, by the way. The range is far better than my previous Linksys and Cisco equipment and my whole house could be covered by a single UniFi WAP. I’m leaving both set up for testing.) The Controller software scales up and is capable of managing thousands of WAPs at multiple locations, with detailed maps and lots of complex options. Fortunately it’s simple and intuitive for small installations.

In the last few weeks, my wireless signal from the UniFi WAPs has been rock solid, 100% of the time, which has never been true before. “Dependable wireless” always seemed like an oxymoron but I’m starting to believe it. Feedback on Amazon is uniformly favorable.

There are two other things that set the UniFi WAPs apart from the competition.

A couple of clicks produces a guest network, with or without a security key, and provides true isolation from the rest of the network. When a computer is connected to the guest network, it has an Internet connection but it cannot see anything else on the network – no snooping around the server trying to guess login passwords. Many of the consumer-grade WAPs can be set up for “guest access” but it’s not completely effective: guests are isolated from other wireless devices but not isolated from the wired computers and devices on the network. (A side effect of the UniFi isolation is that it’s not possible to share office printers with anyone on a UniFi guest network. They’re so isolated they can’t see the printers. The Pro model permits whitelisting some equipment to get around that but that comes along with a higher price and more complexity.)

The other feature is still a work in progress. UniFi is currently testing an upgrade to the Controller software that supports Zero Handoff. It’s something that currently is only possible with high-end professional wireless systems. The idea is that your computer or tablet automatically switches from one WAP to another as you walk around, so you’re always connected to the closest one. It’s truly wireless the way it’s meant to work. It’s never been possible for small businesses until now. The software upgrade is currently in beta testing; when it’s final, it will work with existing equipment but it will require some reconfiguring of the wireless network.

Let me know if your wireless network is driving you crazy. I’ll come and set up the UniFi access points. Anyone who knows me is aware of how deeply cynical I am about wireless but you know what? I think you’ll like the UniFi WAPs.