Windows XP Computers Must Be Taken Out Of Service Now 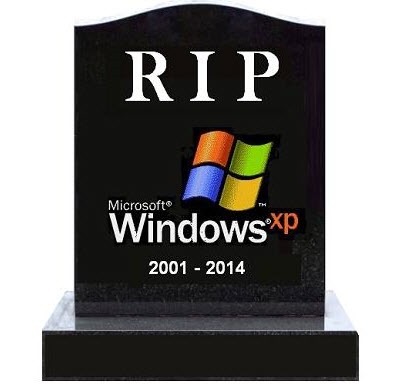 On April 8, 2014, Microsoft will end support for Windows XP. If you haven’t taken all Windows XP computers out of service by April 2014, you and your business will be vulnerable to data theft, identity theft, PC vandalism, viruses, and malware.

“End of support” means Microsoft will not issue any more security updates for Windows XP or Office 2003. The bad guys are stockpiling zero-day exploits – methods of getting a virus on a Windows XP computer for which there is no patch. After April 8, every exploit will be a zero-day exploit.

If you’re running a Windows XP computer and getting automatic updates from Microsoft, then you saw a popup window this week from Microsoft to put you on notice of the impending deadline.

This is serious. There is no workaround. Procrastination is not an option. Antivirus programs will not protect you. There is more information from Microsoft here.

Buy replacement computers. For complex reasons, there is no way to upgrade a Windows XP computer to Windows 7 or 8. If you’re not sure what to buy, there are suggestions in this article about specific Dell desktop models.

Microsoft has partnered with Laplink to provide free software to help you move your data from a Windows XP computer to a new Windows 7 or 8 computer. It might help home users on a budget, but I don’t recommend it for business users.

Buy Windows 8. If you want to avoid learning new things, there are suggestions in these articles about the new features and how to set things up to minimize your exposure to unfamiliar screens.

—  How To Stay On The Desktop On A Windows 8 Computer

I understand that conservative businesses might prefer to get Windows 7, which is readily available preinstalled on Dell Optiplex desktop computers.

Buy a tablet if it is sufficient to meet your needs. Part of the popularity of tablets is their simplicity. Computers are too complicated and many people no longer need them. An iPad, Android tablet, or Surface 2 might be sufficient for home users, especially the elderly.

Watch out for scams. There will almost certainly be an increase in phone scams from callers pretending to be Microsoft or pretending to be IT support offering to help you with something or other. Read this article for background: Microsoft Does Not Call To Fix Your PC.

Watch the news. This will be interesting. It has the same level of urgency as Y2K. When Y2K arrived, there were few consequences, but not because it was a joke. It was because a lot of committed engineers did a lot of work to minimize the effects.

This has the potential to be a bigger problem with no happy ending. There are almost 500 million Windows XP computers in service around the world. There may not be an immediate global crisis but every security expert expects a steadily increasing level of malware aimed at Windows XP computers after April 8 – and possibly causing serious harm sooner rather than later.

If you’re running Windows XP, you probably prefer not to have things change. I offer my condolences – and that’s it. The world has changed. You don’t have any option except to deal with it.

I’m going to repeat this just to be sure you’ve got it.

If you haven’t taken all Windows XP computers out of service by April 2014, you and your business will be vulnerable to data theft, identity theft, PC vandalism, viruses, and malware.

If you have old computers, please take care of this now. Call me if I can help with shopping, setting up new computers, or moving data.