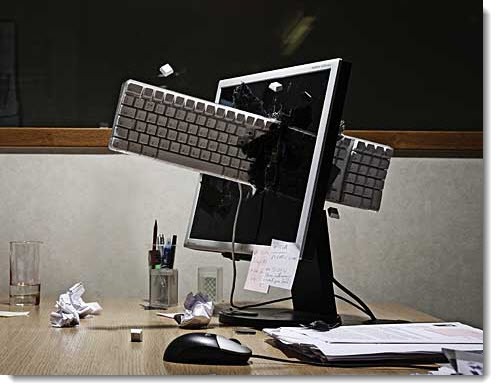 Here’s a story about small business technology in 2014. It’s a long story and there’s no moral and no villain (except for Adobe, in the surprise twist at the end, but just so you’re not disappointed – spoiler! – the surprise twist probably doesn’t apply to you).

The setting is a small law office with a mix of Vista, Windows 7, and Windows 8 workstations. There’s a server in the corner running Time Matters 2011, which is the essential line-of-business program for the law practice. Everything is done in Time Matters – it holds the calendar and contacts, and all documents and email messages are scanned and logged into the TM database. The attorney syncs the Time Matters contacts and calendar with her Office 365 mailbox so she can keep track of her schedule on her phone, tablet and laptop when she’s out of the office. (Remember that part. It comes up later.)

The story opens with a new computer. I installed the current version of Microsoft Office.

And thus we ran into Unforeseen Upgrade #1: Time Matters 2011 does not support Office 2013.

It was time to upgrade Time Matters in any case. We had skipped TM 2012 after seeing too many bug reports, but TM 2013 has been available for more than six months and I hadn’t seen any alarming stories about it. Before long, LexisNexis will stop supporting TM 2011, so upgrading TM was the obvious next step.

Slowly. Carefully. I’ve had Time Matters upgrades go very, very badly in the past. Backups, folder preparation, mailbox preparation, stopping services, restarting the server – all done by the book. The upgrade went smoothly. When it was done, Time Matters 2013 started on the server and the workstations and all data was present and accounted for.

The second step was an upgrade of the agent that syncs the Time Matters contacts and calendar with the Exchange mailbox. Again, after slow and careful work, the upgrade was done without any errors and the service started normally.

The attorney’s contacts synced from Time Matters to her mailbox exactly like before.

The attorney’s calendar in Time Matters was full of appointments.

The attorney’s calendar in Outlook was empty.

The log for the Time Matters sync agent said that things were great. Completely fine. No problem. According to the log, the calendar was syncing normally. Not an error anywhere.

The attorney’s calendar in Outlook was empty.

Before we were done, I had billed 10 hours and spent 20 hours trying to find and fix the problem. We were up to the third level of Time Matters support, working with a product engineer who spent many hours on it himself.

We exhausted ourselves trying everything we could think of, every reset and reinstall and clearing out metadata folders and clearing out the database and emptying the mailbox and changing every setting and setting up test accounts and oh my god you have no idea.

From the darkness, a new theory emerged. The database was mounted on SQL Server 2005 on the server. TM tech support was aware of some issues on that version of SQL Server, although no one had seen our particular problem before.

By coincidence LexisNexis was issuing the first service release for TM 2013 to address a pile of issues, including the SQL Server 2005 issues. We could download it the next day! Well, a couple of days later after it was held back for some fine-tuning, but the day arrived and the service release was available and I downloaded it and installed it – slowly, carefully – and restarted the services and voila!

Unforeseen Upgrade #2: install SQL Server 2008 on the server and move the TM database onto it. Several hours of work without any real confidence that this was the source of the problem. But lo and behold, when it was done the attorney’s calendar filled up with appointments. Hallelujah! We were done, right?

There was one niggling issue that the attorney mentioned in passing – the Time Matters toolbar wasn’t appearing in Adobe Acrobat on one of the Vista computers. Could I fix that? Sure. I connected to the computer and ran the familiar sequence of steps to repair TM’s integration with other programs.

Unforeseen Upgrade #3: install the current version of Adobe Acrobat on the Vista computer. How hard could that be?

Adobe has followed Microsoft’s lead and sells its products by subscription. Acrobat XI Pro is expensive at $19.99/month but it’s an unavoidable expense for most offices. I signed the office up for a license and installed the Creative Cloud app that Adobe uses to manage software installations. The app shows all the Adobe programs, with a button by the ones that are currently licensed.

Off I went on the familiar sequence of troubleshooting and Googling and removing and reinstalling and eventually came on the surprise twist.

These are the system requirements for Acrobat XI Pro.

This is what’s listed.

Vista is missing. If you run Adobe’s Creative Cloud installation program on Vista, Acrobat drops off the list of choices. Poof! It’s gone.

That’s right. Acrobat XI can be installed on f*@!ing Windows XP but not on Vista. When I tumbled to it I did some Googling and . . . that’s the end of the story. There’s no technical reason for that. Offhand I can’t imagine what that’s about. I’ve never heard of that. Ever. It’s just Adobe messing with us.

(Nuance: if you dig long enough, you’ll run across a semi-official Adobe blog article with this sentence: “Windows Vista is no longer officially supported, but Adobe does not restrict users from installing and running it on Vista.” In other words, if you spend $449 on the disk version of Acrobat, the program might run on Vista but the company won’t provide any support. Even that option isn’t available for a subscription license.)

I dug into my old source disks and located the install files for an old version of Acrobat 9 and one of my old licenses that wasn’t being used. It’s installed on the Vista computer and it seems to be working.

I can’t even pretend to be surprised by crap like this any more. How can anyone own a computer? It’s a nightmare.

I feel better now that we’ve had this talk. Back to work. It’s business as usual. Sure, I’d rather make money showing you some whiz-bang new technology that does magic tricks instead of cleaning up this kind of colossal clusterf*%@, but that’s what it means to have job security, I guess.